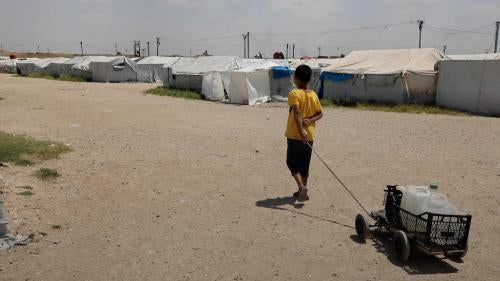 (New York) – Many children repatriated from detention camps for Islamic State (ISIS) suspects and their families in northeast Syria are successfully reintegrating in their home countries, Human Rights Watch said in a report released today. Australia should act urgently to allow the return of an estimated 30 or more Australian children and 16 women who remain in camps and prisons in northeast Syria. Detained Australian men should also be returned as soon as possible.

The 63-page report, “‘My Son is Just Another Kid’: Experiences of Children Repatriated from Camps for ISIS Suspects and Their Families in Northeast Syria,” documents the experiences of approximately 100 children who have been repatriated or returned to France, Germany, Kazakhstan, the Netherlands, Sweden, the United Kingdom, and Uzbekistan between 2019 and 2022. Human Rights Watch found that despite years of detention in life-threatening conditions with insufficient water, fresh food, and health care, and little to no access to education, many of the children appear to be adjusting well and performing well in school. Many have reintegrated smoothly and enjoy a wide range of activities with their peers, including football, skating, cycling, dancing, crafts, and music.

“Children rescued from the horrors of the camps are in school, making friends, and building new lives in their home countries,” said Jo Becker, children’s rights advocacy director at Human Rights Watch. “Despite enduring unimaginable suffering, many are reintegrating remarkably well.”

Human Rights Watch surveyed 81 family members, foster parents, social workers, and teachers, and interviewed family members, lawyers, legal guardians, and mental health professionals about returned or repatriated children. When asked how the child is adjusting, 89 percent of survey respondents reported that the child was doing “very well” or “quite well.” Seventy-three percent said the child was performing “very well” or “quite well” in school.

A grandfather of several children repatriated to Sweden in 2019 said: “It is possible, fully possible, for reintegration and recovery of children. My grandchildren are evidence of this. They have recovered in the most incredible way.… All children should have the opportunity to get a new chance in life.”

Approximately 56,000 people, nearly all of them women and children, are arbitrarily detained in al-Hol and Roj, two large, locked camps primarily holding the wives and children of male ISIS suspects in northeast Syria. More than 18,000 are from Syria, approximately 28,000 from neighboring Iraq, and more than 10,000 are from about 60 other countries. More than 60 percent are children.

Most were detained in February and March 2019, when regional fighters backed by a United States-led military coalition toppled the last remnant of the self-declared ISIS “caliphate” in northeast Syria. Their detention is clearly arbitrary and unlawful, Human Rights Watch said. None of them have been brought before a court to determine the necessity or legality of their detention.

Nearly 80 percent of the children in the camps are under age 12, and 30 percent are age 5 or younger. Many have spent the majority, if not all, of their lives unlawfully detained in northeast Syria in what amounts to collective punishment, a war crime.

The regional authorities, the Kurdish-led Autonomous Administration of North and East Syria, have repeatedly said they lack the resources to detain the foreigners and have appealed to countries to bring their nationals home. Top United Nations officials have also repeatedly called on governments to repatriate their nationals. But many countries have stalled or refused to take any or all of them back.

In October, Australia brought back 4 women and 13 children, its first repatriations since 2019, when it brought back 8 children. At least 50 Australians, including an estimated 30 or more children and 15 women, remain in camps and prisons in northeast Syria.

Human Rights Watch also identified policy choices by repatriating governments that made it more difficult for children to reintegrate, and in some cases, even caused additional harm. In some countries – including Belgium, France, the Netherlands, and Sweden – authorities have immediately separated children from their mothers if the mother is being investigated or charged with ISIS-related offenses. That has caused children significant emotional and psychological distress, family members and mental health professionals said.

In some countries, extended family members, such as grandparents, face lengthy investigations before they are allowed to care for returned children or have contact with them, even if they have been in contact with the authorities for years. Human Rights Watch identified the case of a girl who arrived in France at age 5, but spent 3 years in foster care before her grandparents were allowed to care for her. Ensuring contact with family members as soon as possible can help provide stability and support successful reintegration, particularly if the child’s parents are deceased or detained, Human Rights Watch said.

Human Rights Watch found that some children exhibit emotional or behavioral issues related to trauma they experienced while living under ISIS or in the detention camps, or struggle to catch up in school. However, mental health professionals emphasize that the learning assistance and psychosocial support extended to other children who have survived war, loss of loved ones and captivity, such as those who were refugees or trafficked, can facilitate their successful reintegration.

Security and humanitarian experts warn that the already dire conditions in the detention camps are deteriorating, and becoming increasingly dangerous, as detainees loyal to ISIS have attacked other detainees, camp authorities, and aid workers, and guards and detainees clash. Hundreds of children have died in the camps in the past three-and-a-half years, many from hypothermia, malnutrition, and preventable diseases.

“The greatest risk is not bringing the children home but leaving them in the camps where they risk death, illness, recruitment by ISIS, and indefinite detention for the suspected crimes of their parents,” Becker said. “Ahead of the coming harsh winter conditions, Australia should urgently allow its remaining nationals to return home and do their best to keep mothers and children together.”