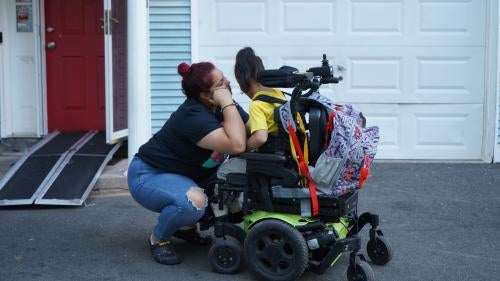 (New York) – Child welfare systems in the United States too often treat poverty as the basis for charges of neglect and decisions to remove children from their parents, Human Rights Watch and the American Civil Liberties Union (ACLU) said in a report released today. The system’s disproportionate impact on Black and Indigenous families and people living in poverty, and the sheer number of children removed unjustly, make this a national crisis warranting immediate attention and action.

The Family Separation Crisis in the US Child Welfare System

The 146-page report, “‘If I Wasn’t Poor, I Wouldn’t Be Unfit’: The Family Separation Crisis in the US Child Welfare System,” documents how conditions of poverty, such as a family’s struggle to pay rent or maintain housing, are misconstrued as neglect, and interpreted as evidence of an inability and lack of fitness to parent. Human Rights Watch and the ACLU found significant racial and socioeconomic disparities in child welfare involvement. Black children are almost twice as likely to experience investigations as white children and more likely to be separated from their families.

“The child welfare system punishes parents for poverty by taking their children away,” said Hina Naveed, Aryeh Neier fellow at Human Rights Watch and the ACLU and the author of the report. “Parents need resources to help provide for their families, but what they are getting is surveillance, regulation, and punishment.”

Human Rights Watch and the ACLU analyzed national and state data on income and poverty levels, child maltreatment, and the foster system, and interviewed 138 people, including affected parents and caregivers, attorneys, government workers, local, state, and national advocates, and others.

One in three children in the US will be part of a child welfare investigation by age 18. Nearly eight million children were referred to a child maltreatment hotline in 2019, with investigations resulting for three million of them. More than 80 percent were found not to have faced abuse or neglect.

One woman told us her son injured himself when he slipped on water while dancing in the kitchen. “I rushed him to the emergency room when he got hurt. The doctors asked me questions, and I told them everything.” She was shocked to learn they reported her to child protective services for suspected abuse, triggering a cascade of interventions that she said deeply harmed her children and damaged their relationship.

Human Rights Watch and the ACLU found that nearly 75 percent of child maltreatment cases nationwide in 2019 involved “neglect” as defined by the system.

A 52-year-old mother from Oklahoma said the condition of her small mobile home was a factor in a child welfare investigation that caused her to lose custody of her 8-year-old son. “They said [one reason] was because we had no running water, but I had like 12 gallons in my camper,” she said. “We were looking for a [larger] place to rent and hadn’t found one yet.”

Indigenous children enter the foster system at nearly double the nationwide rate. Indigenous parents are up to four times more likely to have their children taken than their non-Indigenous counterparts.

On November 9, 2022, the Supreme Court heard oral arguments in Brackeen v Haaland, a case challenging the constitutionality of the Indian Child Welfare Act, which requires state courts to make active efforts to keep Native families together. The case could have significant consequences for Native children, families, and communities. A decision is expected by June 2023.

Investigations are often highly stressful, and even traumatizing, for children and their families, including unannounced home and school visits and body checks.

Broad and vague state definitions of abuse and neglect allow caseworkers to make subjective determinations. If a caseworker or agency determines that abuse or neglect has occurred, the parents or other caregivers are listed on a state central registry, often for years. This adversely affects their employment and ability to foster other children, including their own relatives.

Removing a child from their parents, even for a short time, can be highly traumatizing, with long-term consequences, Human Rights Watch and the ACLU said. In some cases, children in out-of-home placements experience maltreatment, including sexual or physical abuse, causing further trauma.

See how we analyzed the data for this report

Parents working to reunite with their children may be allowed to visit with their child, but often under the supervision of a caseworker, leading to awkward interactions that may be used against parents as evidence of lack of parental bonding.

“It takes a toll on me every single time I leave my visit,” said a California mother.

Conditions of poverty, including housing instability or the inability to take off work or pay for travel and other costs, makes it difficult for parents living in poverty to reunite with their children.

The number of children placed in the foster system due to parental alcohol or drug use has more than doubled in the last two decades. The child welfare system indiscriminately punishes parental use of any substance, even legal or medically indicated substances, without clear evidence of harm or risk to the child. In some cases, parents in recovery said their adherence to medically indicated treatment plans was used against them.

Parents have fewer due process protections in child welfare cases than in the criminal legal system. “I wish this happened in criminal court,” said a California father. “At least we would get a jury trial.”

Parents often lack information on rights and adequate legal support as they fight to keep their children, limiting their ability to assert their rights, respond to charges, and appeal. Many child welfare interventions happen without judicial oversight.

Federal, state, and local authorities should take immediate measures to reduce the harmful impact of child welfare interventions and to strengthen and support families and communities to prevent child maltreatment. Expanding social protection programs, such as the child tax credit, can provide families with much needed financial support that may help reduce and prevent neglect, as defined by states, rooted in poverty.

Officials should hold public hearings to hear from affected families, ensure that poverty-related circumstances are no longer penalized, replace anonymous reporting with secure confidential reporting, reduce unnecessary interventions, increase due process protections for parents, and give parents more meaningful support that addresses their needs without subjecting them to surveillance and regulation.

“The harm caused by the child welfare system is so severe that the entire system needs rethinking,” Naveed said. “Long-term change requires addressing the extreme economic hardship at the heart of many child welfare cases and the corrosive impact of systemic racism.”