Members of the European Parliament

To view the PDF version of the letter, please click here

We are writing to share our concerns and recommendations ahead of the forthcoming European Union (EU) - China summit. While we understand that the main topic of discussions will be the Ukraine crisis and the Chinese government’s position on it, we urge you to dedicate adequate time to also discuss those authorities’ assaults on human rights both within and increasingly outside China’s borders. In that regard, we would also like to caution you against spending time persuading your Chinese counterparts to holding yet another round of the bilateral human rights dialogue.

Our concerns are consistent with High Representative Borrell’s remarks at the recent Munich Security Conference about the need to resist the “revisionist campaign” by the Chinese and other governments against human rights and international institutions.

Since the last EU-China summit, our organizations have published additional information that Chinese authorities are committing mass atrocity crimes targeting Uyghurs and other Turkic communities. Beijing’s actions are eliminating Tibetans’ cultural, linguistic, and religious rights, and similarly threaten Hong Kong’s once-vibrant civil society and democratic rights. The government has deepened its use of high-tech state surveillance, persecuted or prosecuted countless independent activists, and sought to weaken international mechanisms by which it could be held accountable at the United Nations. Recent events further show how empty the Chinese government’s alleged commitment to “respect for international law and for fundamental norms governing international relations, with the United Nations (UN) at its core” were, as expressed at the end of the 2019 summit.

We acknowledge that the EU has taken a series of steps in reaction to the profound human rights crisis unfolding under State Chairman Xi Jinping – significant achievements given the challenges of unanimity in EU foreign policy. However, we regret that Europe’s approach has yet to match the severity of that crisis.

In this context, we are particularly concerned about allocating precious time during the upcoming summit to discussions over holding yet another round of the bilateral human rights dialogue. Despite truly commendable efforts by the European External Action Service (EEAS), the exercise itself is, at best, incapable of triggering any meaningful human rights progress in the country, and, at worst, a counterproductive public relations coup for the Chinese government.

President Xi and the Chinese Communist Party actively reject and oppose universally enshrined human rights concepts, norms, and laws.  Beijing rejects any criticism of its ruthless, systematic repression as “interference in domestic affairs,” and concerns expressed during the human rights dialogue – however strong and well informed – are unlikely to change that position. The human rights dialogue is an inadequate tool relative to the scope and the severity of China’s human rights crisis. As the February 4 Joint Statement by Russia and China expressly stated, while undermining the universality of human rights norms, the two states seek to make "dialogue" and "cooperation" among states, with no input from civil society, the main form of human rights promotion. The EU dialogue thus risks helping to fulfil this vision of a diminished role for human rights.

Finally, a deeply worsening situation despite 37 previous rounds of this meeting should suffice for the EU and its member states to realize that the exercise has not contributed to human rights progress in China. 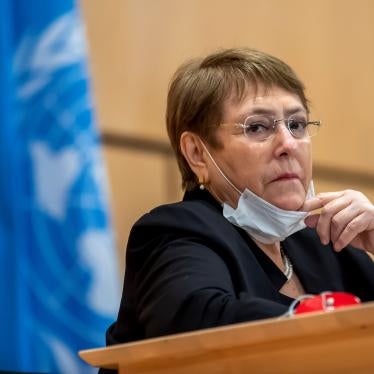 For all these reasons, we urge the EU leaders to publicly announce a suspension of the human rights dialogue with Chinese authorities until it can be a meaningful exchange capable of producing positive impact on the human rights situation in the country. The EU and its member states should establish clear human rights benchmarks for progress in their relations with China, and focus their efforts and energy towards considering more effective tools to secure positive change in the country. Specifically, we urge the EU and its member states to:

We stand ready to discuss these issues with you at your convenience.