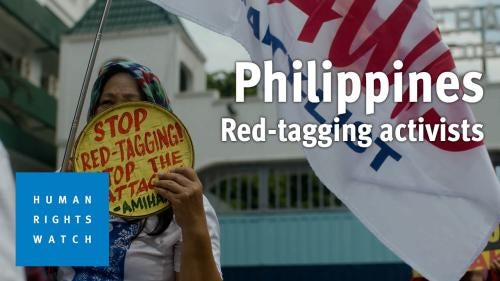 (Manila) – The Philippine government should end the “red-tagging” of activists as rebels or supporters of the communist insurgency, Human Rights Watch said today, releasing a video about the threatening practice and its impact. The video features a human rights activist, a workers’ rights advocate, and a journalist whom the authorities have red-tagged.

Red-tagging, also known as red-baiting, has been used for decades in the Philippines in the government’s campaign against the communist New People’s Army (NPA), which began in 1969. The government’s counterinsurgency efforts include publicly accusing activists, journalists, politicians, and others and their organizations of being directly involved in the fighting or supporting the NPA. The Philippine military has long been responsible for large numbers of extrajudicial killings and torture of alleged communists.

“Red-tagging is a pernicious practice that targets people who often end up being harassed or even killed,” said Carlos Conde, senior Philippines researcher at Human Rights Watch. “Red-tagging is rapidly shrinking the space for peaceful activism in the Philippines.”

Red-tagging has become deadlier since Rodrigo Duterte became president in 2016. Duterte created the National Task Force on Ending Local Communist Armed Conflict (NTF-ELCAC), with billions of pesos at its disposal, making red-tagging his government’s official policy. The task force is composed of, and headed by, former military officials. It carries out red-tagging through its social media posts and official pronouncements.

Civil society groups have called for the task force to be defunded or abolished. Domestic human rights groups contend that the task force’s red-tagging often precipitates violence against those named. Karapatan, a domestic human rights group whose members are often targets of red-tagging, says that dozens of red-tagged activists have been killed or arrested. The United Nations Office of the High Commissioner for Human Rights has denounced these killings.

In the Human Rights Watch video, Cristina Palabay, secretary-general of Karapatan, describes how she was harassed and threatened with rape and violence as part of the red-tagging. Mylene Cabalona, president of the BPO Industry Employees’ Network, says that her work to advocate for the welfare of call-center workers has led to threats online, including accusations of rebel links. Cong Corrales, editor of the Mindanao Gold Star Daily, a newspaper in the southern Philippines, says he and has family have been accused of being communist supporters because of his writing.

“Red-tagging is a key component of the Philippine government’s abusive campaign against critical activists, journalists, and politicians,” Conde said. “The United Nations, the European Union, and influential governments should not merely denounce red-tagging, but publicly call on President Duterte to end this deadly practice.”