(Washington, DC) – The new Covid-19 variant underscores the dangers of severely unequal access to Covid-19 vaccines and the concentration of production in the US and Europe, Human Rights Watch said today. Human Rights Watch and other groups wrote to the US and German governments urging them to act on a new list published today by experts identifying more than 100 companies in Africa, Asia, and Latin America with the potential to produce mRNA vaccines.

This new list makes it clear that increased production of mRNA vaccines is possible outside the US and Europe. It illustrates that the companies that developed safe and effective Covid-19 mRNA vaccines are not sharing their knowledge and technology widely with capable manufacturers. The US and German governments should take all available measures to ensure that Covid-19 vaccine makers urgently transfer technology to other capable manufacturers from Africa, Asia, and Latin America, and the World Health Organization technology hub.

“Global vaccine production forecasts suggesting there will soon be enough Covid-19 vaccines for the world are misleading,” said Aruna Kashyap, associate business and human rights director at Human Rights Watch. “The US and German governments should press for wider technology transfers and not let companies dictate where and how lifesaving vaccines and treatments reach much of the world as the virus mutates.”

Diversifying and scaling up global production in low- and middle-income countries through sharing of knowledge and technology, especially for mRNA vaccines, would help shore up vaccine supplies to leave the world better positioned to collectively respond to the pandemic.

The list of potential mRNA manufacturers was compiled by the coordinator of the AccessIBSA project, which campaigns for access to medicines in India, Brazil, and South Africa, and a vaccine expert from the Médecins Sans Frontières (MSF or Doctors Without Borders) Access Campaign.

Access to Covid-19 vaccines is extremely unequal globally and supply shortages threaten health, lives, and livelihoods as new variants emerge. As of November 29, low-income countries had received just 0.6 percent of the world’s vaccines. The overwhelming majority of the BioNTech-Pfizer, Moderna, and J&J vaccines have gone to high-income countries, according to data gathered by Airfinity, a science information and analysis company, and reported by the People’s Vaccine Alliance.

The US government provided approximately US$1 billion in public funds each to Moderna and J&J, which produces a viral vector vaccine, for Covid-19 vaccine research and development during the pandemic. The US National Institutes of Health funded foundational innovations that made Moderna’s and Pfizer-BioNTech’s Covid-19 vaccines possible. The US government also made advance purchases of Pfizer, Moderna, and J&J’s vaccines.

The German government provided significant funding to BioNTech to research and develop its mRNA Covid-19 vaccine with Pfizer. The US and German governments have a responsibility to press those companies to share knowledge and technology more widely, Human Rights Watch said.

“There are over 100 companies across Africa, Asia, and Latin America who have the capacity to make an mRNA vaccine,” said Achal Prabhala from the AccessIBSA project. “These companies can bridge the yawning inequity in mRNA vaccine supply in poor countries. All they need is for the US and German governments to end monopolies and share the valuable technology they funded and essentially created with them.” 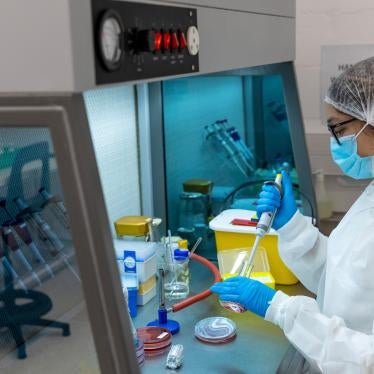 A waiver would enable governments to collaborate on expanding the manufacture of Covid-19 vaccines, treatments, and testing without fearing trade-based retaliation. Over 60 low- and middle-income governments are co-sponsoring the proposal. The US government has signaled support for a waiver. High-income governments, including Germany and the European Commission, are among those who have consistently blocked the waiver. These governments should drop their opposition to the TRIPS waiver immediately and work toward swift adoption, Human Rights Watch said.

Civil society groups around the world, including the People’s Vaccine Alliance and its members, have called for both the TRIPS waiver and wider technology transfers. UN experts wrote to both the US and German governments on October 14, among others, requesting information on their efforts to “to avoid vaccine hoarding and to ensure global vaccine procurement and distribution” including around strengthening the capacity of low- and middle-income countries “to produce vaccines themselves.”

According to the WHO, every day there are six times more boosters being administered globally than first doses in low-income countries.

These forecasts do not disaggregate where particular vaccines are approved for use, which determines how and where they can be distributed. These forecasts also fail to account for the additional doses needed for boosters, the vaccination of younger children, or for new variants, as well as those lost to wastage. These factors significantly increase global demand.

As of October 12, high-income governments had collectively pledged to donate 1.8 billion vaccine doses, but just 14 percent had been delivered, according to Airfinity data cited by the People’s Vaccine Alliance.

On November 29 the African Vaccine Acquisition Trust (AVAT), the Africa Centres for Disease Control and Prevention (Africa CDC), and COVAX stated “the majority of the donations to-date have been ad hoc, provided with little notice and short shelf lives.” The lack of transparency around projected delivery schedules makes it impossible for governments, COVAX, and other procurement efforts to know when vaccines will be delivered for distribution.

Government pledges are inadequate since an approach focused on dose redistribution does not increase and diversify pharmaceutical manufacturing capacity in low- and middle-income countries, Human Rights Watch said. The US and German vaccine developers heavily rely on US and European manufacturing. Limiting technology transfers to the US and Europe significantly skews the global supply chain, making vaccine access precarious and unpredictable.

Thus far, none of the companies has joined WHO-led initiatives to pool and share intellectual property, and Pfizer, BioNTech, and Moderna have yet to participate in WHO’s mRNA technology transfer hub.

Moderna’s and BioNTech’s recent announcements that they will build mRNA manufacturing plants in Africa do not substitute for more widespread licensing and technology transfers to capable manufacturers and participation in the mRNA technology transfer hub. Moderna did not specify a location for its plant or when it would be operational. BioNTech stated it will begin construction on facilities in Rwanda and Senegal in mid-2022.

The US government’s plan to expand domestic vaccine manufacturing in the second half of 2022 reinforces dependence on US production and vaccine donations.

Pfizer said that “only a few facilities in the world are able to perform the critical steps needed to manufacture mRNA vaccines and the inputs to produce those vaccines at a large scale.” Pfizer stated that it “welcomes voluntary initiatives that add to the pool of resources and options available to promote equitable access to COVID-19 therapies and vaccines and…remain[s] committed to constructive dialogue with all parties.”

Moderna said it was “not aware of any idle mRNA manufacturing capacity” but said it was committed to “pursuing additional partnerships around the world to expedite production and delivery” of its vaccine. A recent MSF Access Campaign study found that it took Pfizer and Moderna three to seven months to transfer technology and begin shipping vaccines from new facilities.

Experts in the issue of vaccine access have been critical of J&J’s restrictive licensing practices, and decision to export millions of vaccine doses produced in South Africa to Europe. J&J did not respond to Human Rights Watch’s questions about its policies and practices.

“The world needs decisive and transformative leadership from the US and German governments now,” said Margaret Wurth, senior researcher at Human Rights Watch. “World leaders have repeatedly promised solidarity, cooperation with the global community, and a smart Covid-19 response. They urgently need to deliver.