Since October 29, numerous fires have severely damaged Thantlang, a remote town in Myanmar’s northwestern Chin State. The evidence from space is undeniable: residential homes, places of worship, commercial buildings, and more have been reduced to ash.

These environmental satellites have detected several thermal anomalies over Thantlang town on at least 10 different dates in the past month, during the day and at night. 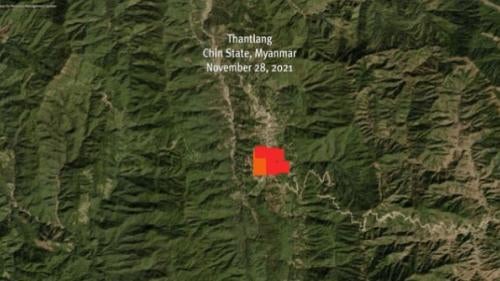 Human Rights Watch also reviewed dozens of satellite images collected by PlanetScope, a constellation of satellites operated by the company Planet, that capture the entire world every day at three meters resolution. Human Rights Watch was not able to estimate the total number of destroyed buildings, due to the images’ spatial resolution, but before and after satellite imagery helped to confirm the locations of the most severely damaged areas as indicated in the thermal anomaly data.

The satellite imagery and thermal anomalies data corroborated multiple reports of burning in Thantlang, including aerial photos and videos of fires and damaged buildings that appeared on social media over the past month, plus reports from local media and human rights groups.

The evidence shows the damage did not result from one large fire that spread through the town but from numerous fires that originated in different parts of the town over several days, suggesting they were deliberately set.

How exactly these fires started remains unclear. Both the Myanmar military and the anti-junta militia fighting the military have blamed each other for the burnings. Over the past month, local media have reported brief clashes between the Myanmar military and anti-junta militia groups in the area. The town has been largely uninhabited since September when most of its population fled due to earlier fighting. Independent monitors are needed to determine what’s happening in Chin State. Concerned governments and the United Nations should press for humanitarian agencies to get unhindered access. Coordinated sanctions are needed against those responsible for the abuses.

This dispatch has been corrected to clarify that the group fighting the Myanmar military is an anti-junta militia.