(Paris) – French officials regularly subject adults and children living in migrant encampments around Calais to degrading treatment, Human Rights Watch said in a report released today. Five years after French authorities demolished the sprawling Calais migrant camp frequently called the “Jungle,” more than 1,000 people are staying in encampments in and around the town.

The 79-page report, “Enforced Misery: The Degrading Treatment of Migrant Children and Adults in Northern France,” documents repeated mass eviction operations, near-daily police harassment, and restrictions on provision of and access to humanitarian assistance. The authorities carry out these abusive practices with the primary purposes of forcing people to move elsewhere, without resolving their migration status or lack of housing, or of deterring new arrivals.

“Subjecting people to daily harassment and humiliation is never justifiable,” said Bénédicte Jeannerod, France director at Human Rights Watch. “If the aim is to discourage migrants from gathering in northern France, these policies are a manifest failure and result in serious harm.”

The Degrading Treatment of Migrant Children and Adults in Northern France

Human Rights Watch interviewed more than 60 migrants, including 40 who identified themselves as unaccompanied children, in and around Calais and the nearby commune of Grande-Synthe from October through December 2020 and June to July 2021. Human Rights Watch also met with officials from the prefecture and child protection office for the Pas-de-Calais department, and the Grande-Synthe mayor’s office.

An estimated 2,000 people, including at least 300 unaccompanied children, were staying in and around encampments in Calais in mid-2021, according to humanitarian groups. Several hundred more, including many families with children, were in a forest in Grande-Synthe, adjacent to the city of Dunkerque (Dunkirk).

Policing efforts to push migrant adults and children out of Calais and Grande-Synthe have not discouraged new arrivals and do not appear to have reduced irregular Channel crossings, which hit record highs in July and August. But policing practices have inflicted increasing misery on migrants.

“When the police arrive, we have five minutes to get out of the tent before they destroy everything. It is not possible for five people, including young children, to get dressed in five minutes in a tent,” a Kurdish woman from Iraq told Human Rights Watch in December 2020.

Police routinely require migrants to move temporarily off the land they are occupying while police confiscate – and often destroy – tents, tarps, and sleeping bags the people have not managed to take with them. Police subjected most Calais encampments to these routine eviction operations every other day in 2020 and the first half of 2021. In Grande-Synthe, these evictions took place once or twice a week.

Showing the Despair, and the Beauty, in Migrants’ Lives 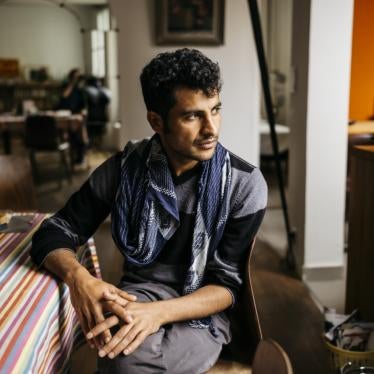 Police conducted more than 950 routine eviction operations in Calais and at least 90 routine evictions in Grande-Synthe in 2020, seizing nearly 5,000 tents and tarps and hundreds of sleeping bags and blankets, according to Human Rights Observers (HRO), a group that regularly monitors police evictions of these encampments.

Police also periodically evict everyone from an encampment, claiming that these are “shelter” operations. But shelter is only provided for a few days. The authorities carrying out mass evictions also do not effectively identify and take specific steps to protect unaccompanied children.

These tactics leave children and adults constantly on alert and focused on their day-to-day survival. Many are haggard, sleep-deprived, and, as the national ombudsperson’s office, the French Defender of Rights, observed in September 2020, “in a state of physical and mental exhaustion.”

Officials have also placed legal and practical restrictions on provision of and access to humanitarian assistance. Local ordinances prohibit food and water distributions by aid groups in the Calais town center. Government aid sites are often moved, or aid is distributed at the same time as evictions.

Emergency shelter is in principle available to anybody who needs it in France, but the system is overstretched. Shelters in Calais are frequently full, and emergency accommodation is even more limited for those in Grande-Synthe. Emergency shelter is usually limited to a few nights, even for families with young children. A separate shelter system for unaccompanied children is also frequently at or near capacity, with many children turned away.

Police have also harassed volunteers with HRO, Utopia 56, and other nongovernmental groups that observe police conduct during evictions. Some police have falsely told observers they could not film police operations, threatening them with arrest.

These abusive practices further a deterrence policy under which officials seek to eliminate or avoid anything they view as drawing migrants to northern France or encouraging the establishment of encampments. This approach does not account for the reality that the real draw is its proximity to the United Kingdom, 30 kilometers across the Strait of Dover.

“Exiles aren’t travelling to northern France because they’ve heard they can camp in the woods or stay under a bridge. They aren’t coming because groups are giving them a little food and water. They come because that’s where the border is,” said Charlotte Kwantes, Utopia 56’s national coordinator.

The end of the Brexit transition period means that the United Kingdom can no longer return most adult asylum seekers to France without first considering their asylum claims. The UK government has also stopped accepting new family reunification transfer applications, the only practical legal option for UK entry available to unaccompanied children.

The prefects of Pas-de-Calais and Nord, the departments in which Calais and Grande-Synthe are located, should end repeated evictions of migrant encampments and stop seizing people’s belongings, Human Rights Watch said. The prefectures should work with departmental authorities to offer alternative accommodation that provides people with stability and helps them make informed choices about seeking asylum or other status in France or elsewhere or returning to their home countries.

French child protection authorities should do more to inform unaccompanied children about their options, including entry into the child protection system, which offers the possibility of receiving legal status at age 18.

The European Union should create a system for sharing responsibility among EU member states that avoids unfair stress on countries of first arrival and the most popular destination countries, and takes into due consideration the family and social ties as well as individual preferences of asylum seekers.

The UK government should develop safe and legal means for migrants to travel to the United Kingdom to seek safe haven, reunify with family members, or work or study.

“French authorities should abandon their failed playbook toward migrants of the past five years,” Jeannerod said. “They need a new approach to help people, not repeatedly harass and abuse them.”