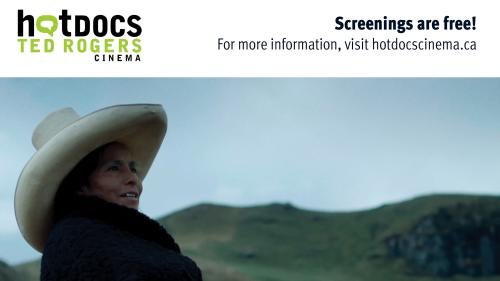 The 18th annual Toronto Human Rights Watch Film Festival, in its second year of partnership with Hot Docs, will present five powerful and compelling films that will be completely digital for the first time since the Toronto HRWFF’s inception. This exciting virtual opportunity allows the festival to provide unprecedented access to free film screenings and programming across Canada. Nationwide audiences will be able to view films safely from home and learn about human rights issues and the demand for justice, dignity, compassion, and equality for all.

Toronto HRWFF is pleased to welcome Jennifer Baichwal and Nick de Pencier as new chairs of the festival.

“We are thrilled to be part of HRWFF, and delighted to bring these outstanding films to Canada,” said Jennifer and Nick. “The past year has put gross global inequities into sharp focus, and these stories demonstrate the resilience, intelligence and passion of ordinary people striving to change their worlds. They, and the filmmakers who document them, demonstrate immense courage and dignity in the face of fear, greed, oppression and hatred. We urge all Canadians to spend some time with Human Rights Watch and these films at our festival. Prepare to be inspired!”

This year's films present stories at the heart of human rights battles in Kenya, Venezuela, Iran/Turkey, and Peru. These specially selected films touch upon issues that dominate today’s headlines: environmental activism, protest marches, LGBTQ rights, and the plight of refugees. All five films will be free and available to stream for all of Canada, from February 18 through 22, 2021. Tickets can be reserved beginning of February.

The festival will kick off with Maxx Caicedo and Nelson G. Navarrete’s stunning A La Calle in which ordinary Venezuelans fight to reclaim their democracy from the dictatorship of Nicolás Maduro. Following this screening will be a LIVE ZOOM with special guests.

In I Am Samuel, from Peter Murimi, a queer Kenyan man balances pressures of family loyalty, love, safety and identity. In Wake Up on Mars, directed by Dea Gjinovci, a family is challenged by their daughters’ years-long comas brought on by “resignation syndrome,” a mysterious condition that can affect asylum-seeking children. In Love Child from Eva Mulvad, an illegal love story forces a young Iranian family to seek asylum in Turkey. And in Maxima, directed by Claudia Sparrow, the 2016 environmental Goldman Prize winner Máxima Acuña faces one of the world’s largest gold-mining corporations in her home on the Peruvian Highlands. All screenings will be followed by in-depth discussions with filmmakers, film subjects, Human Rights Watch researchers, or special guests.

A La Calle - OPENING NIGHT
Maxx Caicedo and Nelson G. Navarrete, 2020, Documentary, 110 min.
Spanish, Fully subtitled in English.
Official Selection DOC NYC.
A La Calle is a first-hand account of the extraordinary efforts of ordinary Venezuelans to reclaim their democracy from the dictatorship of Nicolás Maduro, whose policies have plunged the country into economic ruin. Working with a network of clandestine camera crews, the filmmakers spent three years recording exclusive interviews with key opposition figures, including Leopoldo López — whose arrest and imprisonment inspired a national movement — and the grassroots activist Nixon Leal, as well as a host of other Venezuelans. As acting interim president, Juan Guaidó works to rally international opposition to the Maduro government, which tightens its hold over a nation already crippled by hyperinflation, blocking life-saving humanitarian aid and repressing dissent. A La Calle captures the remarkable courage of the Venezuelan people as they unite to restore liberty to their country.
Live Zoom Discussion to follow screening.

I Am Samuel
Peter Murimi, 2020, Documentary, 68 min.
English, Swahili, Luhya, Fully subtitled in English
Official Selection London Film Festival, Hot Docs Canadian International Documentary Festival.
Samuel grew up on a farm in the Kenyan countryside, where tradition is valued above all else. He moves to Nairobi in search of a new life, where he finds belonging in a community of fellow queer men and falls in love with Alex. Their love thrives even though Kenyan laws criminalize anyone who identifies as LGBTQ, and together they face threats of violence and rejection. Samuel’s father, a preacher at the local church, doesn’t understand why his son is not yet married and Samuel must navigate the very real risk that being truthful to who he is may cost him his family’s acceptance. Filmed over five years, I Am Samuel is an intimate portrait of a Kenyan man balancing pressures of family loyalty, love, and safety and questioning the concept of conflicting identities.
Q+A will follow screening.

Wake Up on Mars
Dea Gjinovci, 2020, Documentary, 75 min.
Albanian, Swedish, Fully subtitled in English.
Official Selection Tribeca Film Festival
Two teenage sisters, Ibadeta and Djeneta, lie in a vegetative state in the small Swedish home of their Kosovar family. Their mysterious illness is known as “resignation syndrome,” a condition that can affect asylum-seeking children, often following a threat of deportation. The tight-knit family is trying to rebuild a normal life far from their native Kosovo, where they were victims of persecution. As their devoted parents work to keep their daughters alive and await updates on their immigration status, their youngest brother, Furkhan, imagines a life beyond the snowy expanse of his temporary backyard—and into the far reaches of space. While their entire future hangs in the balance of a pending asylum request, the little boy dreams of building a spaceship to leave it all behind. Furkhan’s desire to build his dream ship to the stars, escaping the unimaginable reality of his sisters’ illness, serves as a powerful, visually arresting metaphor for the contemporary refugee experience.
Q+A will follow screening.

Love Child
Eva Mulvad, 2019, Documentary, 112 min.
Azerbaijani, English, Farsi, Turkish, Fully subtitled in English.
Official Selection Toronto International Film Festival, Chicago International Film Festival.
An intimately filmed, epic love story introduces Leila and Sahand at the start of a turbulent five-year period beginning with their escape from Iran where, while married to other people, they fell in love. Since adultery is punishable by death, and divorce forbidden, they run for their lives and start over again as a family in Turkey with their young son, Mani, who doesn’t yet know that Sahand is his biological father. Suddenly living together in a strange new land, battling tightening asylum laws to find security after years in limbo, they are learning more about each other in the toughest of circumstances and facing hurdles that test the strength of their relationship.
Q+A will follow screening.

Maxima
Claudia Sparrow, 2019, Documentary, 88 min.
English, Spanish, Fully subtitled in English.
Official Selection Hot Docs Canadian International Documentary Festival, Palm Springs International Film Festival, Slamdance Film Festival.
Maxima tells the incredible story of 2016 environmental Goldman Prize winner Máxima Acuña and her family, who own a small, remote plot in the Peruvian Highlands. The Acuñas rely solely on the environment for their livelihood, but their land sits directly in the path of a multi-billion-dollar project run by one of the world’s largest gold-mining corporations. Faced with intimidation, violence, and criminal prosecution,  Máxima fights tirelessly for justice, which  takes  her from the Peruvian Supreme Court to the doors of the World Bank in Washington, D.C. Standing ever mighty, Máxima sings of her love of the land in the face of widespread oppression of indigenous people, and relentless attempts by corporations to exploit resources despite both the eradication of traditional lifestyles and widespread environmental destruction.
Q+A will follow screening.

The Canadian office organizes several larger public and smaller private events throughout the year. This includes the annual Toronto Human Rights Watch Film Festival, which demonstrates the power of film in raising awareness of human rights issues across the globe. The film festival brings to life human rights abuses through storytelling in a way that challenges all to empathize and demand justice for all people. To learn more about their work or make a donation, visit www.hrw.org/canada.

ABOUT HOT DOCS
Hot Docs is a not-for-profit organization dedicated to advancing and celebrating the art of documentary and creating production opportunities for documentary filmmakers. Year-round, Hot Docs supports the Canadian and international industry with professional development programs and a multi-million-dollar production fund portfolio, and fosters education through documentaries with its popular free program Docs For Schools. Hot Docs owns and programs the Hot Docs Ted Rogers Cinema, a century-old landmark located in Toronto’s Annex neighborhood and the world’s first and largest documentary cinema.

ABOUT HOT DOCS TED ROGERS CINEMA
Owned and operated by Hot Docs, Hot Docs Ted Rogers Cinema is the world’s largest documentary cinema. The cinema is a year-round home for non-fiction film and storytelling, presenting first-run international and Canadian documentaries, curated film and speaker series, signature events including Hot Docs Canadian International Documentary Festival, Hot Docs Podcast Festival, and Curious Minds Weekend, as well as hosting some of the city’s premier festivals and events. Since assuming management in 2012, Hot Docs has screened over 1,425 films to audiences of more than 1.3 million. In 2016, a generous C$5 million donation from Rogers Foundation enabled Hot Docs to purchase this venue.