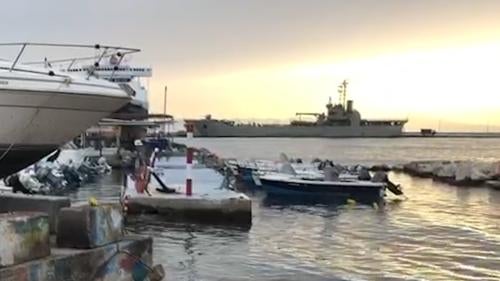 (Athens) – Greece’s decision to detain more than 450 people on a naval vessel and refuse to allow them to lodge asylum claims flagrantly violates international and European law, Human Rights Watch said today. The action may amount to an arbitrary deprivation of liberty.

“The refusal to allow people in its custody to seek asylum and the open threat to send them back to their persecutors flies in the face of the legal obligations Greece has agreed to and the values and principles it claims to represent,” said Bill Frelick, refugee and migrants rights director at Human Rights Watch. “Greece should immediately reverse this draconian policy, properly receive these people in safe and decent conditions, and allow them to lodge asylum claims.”

People interdicted by the Greek Coast Guard since March 1, 2020 have been held on the ship docked in the Mytilene Harbor in Lesbos. Local authorities refused Human Rights Watch requests to enter the dock area where the women, men, and children are being detained during the day or to board the naval vessel where they stay at night. Human Rights Watch spoke by phone with one of the detainees, a Syrian asylum seeker who declined to give his real name or age for fear of retribution.

The man said that 451 people were detained, according to the food lists that he had seen, many of whom are children and women. He said that he and others had asked the Greek authorities to let them lodge asylum claims but were told that they would not be allowed to do so.

A video and photos that the Syrian man sent to Human Rights Watch show women, men, and children on the floor with blankets and mats in the hull of the navy boat.

He said that the first people were detained on the boat on March 1 but that the authorities did not allow them to recharge their mobile phones until March 7, so many were unable to communicate with relatives or others.

The Turkish government announced on February 27 that Turkey would no longer stop asylum seekers and migrants from leaving Turkish territory to reach the European Union. Greece’s National Security Council announced on March 1 the “temporary suspension, for one month … of the lodging of asylum claims by all people entering the country illegally” and their “immediate deportation without registration, where possible, to their countries of origin or transit.”

Greece has the right to control its borders and to manage any crossings into the country. Nevertheless, the Universal Declaration of Human Rights and the EU Charter of Fundamental Rights guarantee the right to seek asylum. Denying people access to asylum is inhumane and illegal. It may violate the fundamental principle of non-refoulement, the practice of not forcing refugees or asylum seekers to return to a country where they are liable to be subjected to persecution, Human Rights Watch said. International, European, and Greek law prohibit arbitrary detention.

The Syrian man said that most of the detainees are Afghans, but that 118 are Arabs, including Syrians, Iraqis, and Palestinians. He said the group also included Somalis, Congolese, and others from Africa.

“They first took us to a police station and fingerprinted us,” he said. “They gave us a document in the Greek language that we can’t understand.” He was able to contact a lawyer by phone who said it was a deportation order, which required him to leave Greece within 48 hours. The man pointed out that they had already been held considerably longer than that. He said that the lawyer told him that he was not permitted to visit with him face-to-face.

“We asked many times for asylum, but they told us the Foreign Ministry has closed asylum to us,” he said.

He also said that many pregnant women and children are among the detainees, all kept in the same area, and that “the children are not receiving sufficient food and clothing.” He also said some people were too ill to eat the food: “We had only 3 toilets for 451 people until today, when they brought 5 portable toilets. There is no shower; no soap.” It is unclear whether pregnant women or new mothers would be able to get pre or post-natal or emergency obstetric medical care.

The Syrian man said that the detainees are moved from the ship to the dock during the day and back onto the ship at night.

“The police have acted correctly,” he said, “but they do nothing to help us and tell us nothing to inform us of our situation.”

He said a representative of the International Committee of the Red Cross had made one visit, but he had not seen anyone from the Office of the United Nations High Commissioner for Refugees.

The man’s relatives, asylum seekers in the Moria camp on Lesbos, requested that Human Rights Watch meet with him and other family members on the boat or on the dock. Human Rights Watch went to the dock to request permission to talk with them but was refused entry. A letter to the police directorate of Lesbos and to the headquarters of the Hellenic Police on March 6, as well as follow-up emails to the police director of Lesbos and two in-person visits to his office on March 7 and 8 yielded no information about the detentions.

The Greek government should immediately reverse the decision to suspend access to asylum for people who crossed the border irregularly and to allow anyone in need of international protection to apply for asylum. The European Commission should urgently stress that the decision to suspend access to asylum is not in line with EU and international law and press the Greek authorities to ensure that no one is detained arbitrarily and guarantee the right to apply for asylum.

“The refusal to allow Human Rights Watch to meet with these detainees appears to be an attempt by Greek authorities to shroud their negligence and denial of basic rights,” Frelick said. “If any of these people are summarily and forcibly returned without respecting their right to seek asylum, Greece would be committing a grave violation of their fundamental right not to be threatened with persecution, torture, or death.”