Tensions are running high on the Greek island of Lesbos, as migrants and asylum seekers arrive on its shores only to be greeted by thugs with wooden bats and police with batons. In response to Turkey’s government recently opening its western border with the European Union, Greece has slammed its border shut. It’s suspending its asylum system, pushing asylum seekers back at the border, and threatening to deport all newcomers. Refugee and Migrant Rights Program Director Bill Frelick, on mission in Lesbos, tells Amy Braunschweiger about the situation on the ground.

How has the situation on Lesbos changed since your last visit?

When I was here in 2016, I couldn’t imagine things being worse. We saw a lawless situation in Moria refugee camp. There were around 6,000 people in the camp, which has capacity for 3,000. Now it’s more than 20,000 people. What’s shocking is that this is part of the European Union. This is an island where Europeans vacation, and a short distance away on this same beautiful island is what is called a “hot spot,” a horrible hellhole, the Moria camp, where refugees are being penned in.

What kind of stories were you hearing from migrants and refugees?

I interviewed a young man today. He tried to board a boat for mainland Greece but wasn’t able to. As he walked back to the camp, he encountered vigilante mobs. He sought shelter in a café, but the café owner started hitting him with a chair, so he went outside, and there the mob beat him with sticks and metal bars. He said the only thing that saved him was that the mob saw another refugee and decided to chase him instead. While this was happening, he saw police passing by and doing nothing.

He found a friend who took him to the hospital. After being treated, he couldn’t get back to the camp because the road was blocked by thugs. The police at the hospital took him back to the Moria camp by, of all things, putting him in handcuffs and in their squad car. The police told the mob barricading the road they were going to deport him. The mob let them through. Then the police took him back to the camp, uncuffed him, and let him go. It was the only way the police could get through the mob.

At the harbor area, police are showing up in force with riot gear and batons. But when thugs set up roadblocks and threaten or assault refugees and humanitarian workers, they turn timid. 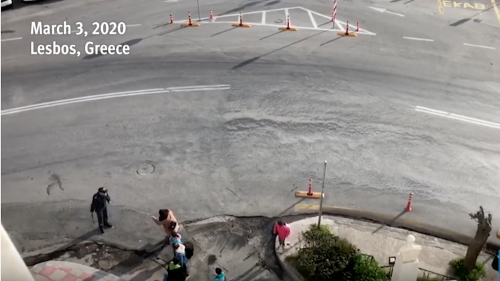 I witnessed a mother and father with five children heading toward the port. A policeman stopped them, shouting, “Go back to Moria.” The mother, holding a child’s hand in one hand, used her other hand to point to her knee, telling the policeman she couldn’t walk back. He said, “I don’t care. Go back.” The police started pushing them. A few minutes later, I saw a policewoman push the children down the street and out of sight, and the parents weren’t with them. It appeared as if they were separating a family.

Mobs have attacked NGO facilities and attacked their vehicles with bats. Some NGOs suspended operations and even evacuated volunteers back to Athens, but after a day or two a number of the NGOs have returned and are doing their best to provide services, often with reduced staffs

Where are people from?

There are some Syrians here, but many of the refugees and migrants at Moria appear to be from Afghanistan, but with asylum seekers from Iraq, Iran, Somalia, and other places as well. Part of the cynicism of what [President] Erdogan of Turkey did was that he only opened Turkey’s border in the west and north to Greece and Bulgaria. He kept the border to Syria closed. You have desperate people in Idlib. They’re trapped, their lives are in great danger, they need to be able to flee into Turkey. Any moral high ground that Erdogan could take by pointing a finger at Greece for pushing back refugees is lost because Turkey is pushing Syrians back into Syria where their lives are threatened.

What has the EU said about this?

The leaders of the EU came to Greece a few days ago and they praised the country, calling it “Europe’s shield” for what it’s doing. This is appalling. It is a spectacular failure to uphold EU values and human values.

What needs to be done?

The immediate thing is to protect refugees and migrants and the NGO workers who provide services to them, to allow new arrivals to seek asylum, and to provide decent reception conditions. This needs to be addressed not just by Greece, but by the EU and wider international community as well.