Guinea’s Justice Minister Mohamed Lamine Fofana has announced his government’s “unequivocal” support for the start of the trial to hold the alleged perpetrators of the September 28, 2009 stadium massacre accountable. The minister spoke at a review this week of Guinea’s human rights record at the country’s third Universal Periodic Review which is overseen by the United Nations Human Rights Council in Geneva.

The minister explained the first brick for the construction of the courtroom in which the trial will take place has already been laid and that the proceedings are to commence in June 2020, after construction is completed in May.

The announcement raises new hopes in what has been a halting judicial process. “Since that day we cry and then we dry our tears and hope that we will have justice,” one victim interviewed for a video produced by Human Rights Watch said during a 10-year commemoration of the massacre and rapes. 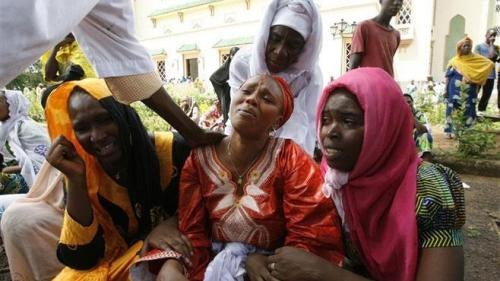 On September 28, 2009, security forces opened fire on a peaceful demonstration of protesters clamoring for free and fair elections. At least 150 people died and hundreds were wounded. More than 100 women were raped or subjected to other forms of sexual violence on September 28 or in the aftermath of the events.

The opening of the long-awaited trial would attract positive global attention and send an important signal that these types of crimes committed in Guinea and beyond will not be tolerated.

But the trial’s progress could face new obstacles in view of the government’s crackdown on protests opposing a new constitution that could allow President Alpha Condé to run for a third term in the 2020 presidential elections. Indeed, past episodes of political instability significantly slowed progress on the 2009 stadium massacre investigation.

The victims and their loved ones have waited for justice for more than 10 years. If the government is serious about at last ensuring justice for one of the most brutal episodes in Guinea’s history, it will follow through with the important commitment made in Geneva.