Months of protests led to the ouster of Sudan’s autocratic president of 30 years, Omar al-Bashir, in April this year. But even as al-Bashir was detained, demonstrations continued across the country calling for a transition to civilian rule and for peace and justice. But the government’s forces turned on them, killing over a hundred in early June. East Africa director Jehanne Henry spoke to Audrey Wabwire about Human Rights Watch’s new report documenting the violence against protesters, the importance of justice, and the power behind the Sudan revolution.

People in Sudan have protested for years. What made the recent protests so organized?

Sudanese have protested over the rising prices of basic goods, deteriorating social services, ongoing wars in some states, and the rampant corruption in Omar al-Bashir’s government. This year, the Sudan Professionals Association, comprised of teachers, doctors, nurses, and others, helped to mobilize professionals across the country, while community leaders and women’s groups at the grassroots level mobilized neighborhoods to join in.

These protests started in December 2018 and early 2019, culminating in a historical sit-in in Khartoum. This led to al-Bashir’s ouster, and the inclusion of civilians in the transitional government. 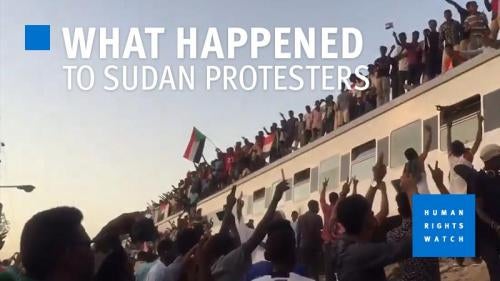 You’ve been documenting al-Bashir’s abuses for a long time, including during the conflict in Darfur. What were you thinking when Bashir finally stepped down?

I never thought I would see Bashir step down. Despite the charges he faces at the International Criminal Court (ICC), he held a firm grip on power and money for so long, we thought we’d never see this day. My Sudanese colleagues were elated, believing this represented a new dawn, an existence without al-Bashir. The celebration from the sit-in was infectious, we could feel it speaking on the phone with protestors. But it wasn’t long before protesters became skeptical. Would the military rulers listen to the protestors’ demands? Would they address the abuses we’d been reporting?

Many news organizations have already analyzed the events of al Bashir’s overthrow. Why did you also document these protests?

People in Sudan have been contacting us to tell us to keep on pushing for justice and accountability.

We held a steady gaze on Sudan since protests started in December 2018. It was clear the government was using familiar tactics of violence against the protesters – shooting live rounds and detaining them with no charge. We saw this repression in 2013 when security forces shot dead around 200 protestors in cold blood, and no justice has been delivered to date.

We wanted to push for justice for the violence and killings

Al-Bashir is being tried in Sudan but only for economic crimes, and not for the crimes against humanity that he is accused of. We still urge the Sudanese government to hand him over to the ICC because justice for many historical issues has been elusive in Sudan.

June 3 of this year has become an infamous day in Sudan. What happened?

Protests did not stop even after al-Bashir was ousted on April 11. Every day, more protestors joined the Khartoum sit-in, building pressure on the new military council to hand power to civilian rule and demanding justice for past crimes.

June 3 was the eve of Eid, the Muslim holy day that ends Ramadan, when people rest with family and prepare to end their month of fasting. It was a dark, rainy night, and many protestors left the sit-in to join their families for Eid. But hundreds remained.

At dawn, soldiers attacked the sit-in camp. They shot and killed protesters, beat and raped others. At least a hundred were killed in the attack and in the days that followed. Some people said they saw soldiers kill and throw bodies into the Nile.

Tell me about the women who led the demonstrations, and the assault they faced. Why were women so significant in this revolution?

Since independence, Sudanese women have been significant, passionate leaders of public protests. Their activism focuses on discriminatory laws that regulate women’s dress and curtail their movement, inheritance, property ownership, and custody rights. If women are accused of adultery, even if the accusation is unfounded, they could be sentenced to a fine and lashing. I was not surprised to see the women’s groups playing such a leading role in the sit-in. For them, the protest was one more avenue to express their vision for a free society. And they have continued to protest calling for more equal representation in the transitional government.

After years of security forces killing protestors, why did young people decide to risk their lives and protest again this time?

We spoke to many young people in their 20s about this. One of the triggers for protests was price hikes and economic hardships, but protesters were frustrated by three decades of repression and quickly transformed the protests into calls for regime change.

One young man from Bahri, northern Khartoum, told me that his brother Walid was an organizer. Since security forces were targeting organizers and leaders, his family feared for him. But Walid refused to stop organizing, saying that this was the best thing he could do with his life, and he was killed by security forces.

The sit-in in Khartoum attracted young people from all over the country. A train from Atbara brought in protestors, while buses ferried people from other parts of the country. They described the sit-in as a festival of ideas where youth sang, held poetry sessions, screened documentaries, and gave speeches about their lived experiences and hopes. They said this heartening experience was unifying, something worth protecting. The attack by the Rapid Support Forces on June 3 shattered this experience. As one 21-year old protester who lived at the sit-in for months told me, “this was the best time of my life and they destroyed it in an instant.”

Who are the Rapid Support Forces? What role have they played in Sudan?

The RSF are known for their counterinsurgency attacks between 2013 and 2016 in Darfur and Southern Kordofan where they torched villages, killed people indiscriminately, and raped women. They were drawn from the Janjaweed, the paramilitary forces that have attacked villages across Darfur since 2003. The RSF was a re-formation of those forces, created by al-Bashir and led by Hemedti [General Mohamed Hamdan Dagalo].

The RSF have received more resources than other security forces and have swanky offices in Khartoum and other cities with new cars and uniforms. They were present in Khartoum since April and led many attacks on protesters, including the massive June 3 attack. After that attack, people from other regions of Sudan said, “now people in Khartoum know what Darfur is like.”

How did you get this information? Isn’t the country still closed to human rights groups?

We spoke to protestors, witnesses, and family members of those who were killed, political leaders, opinion leaders, academics, journalists both inside and outside of the country.

We conducted research inside and outside the country. While in-country, we were cautious because Sudan’s government has yet to openly welcome rights groups, but we still managed to move around and interview key witnesses. Although we did not interview military leaders while we were in the country, we sent a letter to the government asking key questions emerging from our research. We’ve been in touch with newly-appointed civilian leaders. It’s encouraging to see many of our allies in the government.

Sudan has not formally granted permission to human rights groups. Under the al-Bashir regime human rights activists and researchers would be arrested, detained, or deported.  Although we are optimistic about future engagements, we are yet to see how this new government will treat human rights workers.

After months of negotiations between the military and the opposition, there’s a transitional government in place. Are Sudanese people hopeful about these steps?

The sit-in achieved a massive feat and still inspires people in Sudan to continue to demand justice from their leaders. There is relief that al-Bashir is no longer in power, but new rulers have to commit to tangible reforms to lead Sudan towards real change. The people are hopeful, but closely monitoring the transitional process.

So far, there have been many delays in the agreed transitional timelines. The government has set up the promised committee to investigate the attack on June 3, but it does not appear independent because it includes members from the ministries of interior and defense, some of whom could have ordered the attack. The current set-up of this crucial committee has no women members.

The Sudanese authorities should listen to what the people are asking for. Families who have seen no justice for their loved ones who were attacked, raped, or killed have been hopeful for credible investigations. The transitional government should not let them down.