“The dozens of politically motivated arrests over the past three months demonstrate that Prime Minister Hun Sen’s government has no intention of lifting the heavy-handed repression that has darkened Cambodia in recent years,” said Phil Robertson, deputy Asia director at Human Rights Watch. “Foreign governments and donors should loudly call for an end to this wave of arrests and press Cambodia to immediately and unconditionally release all those wrongfully detained for criticizing the government.” 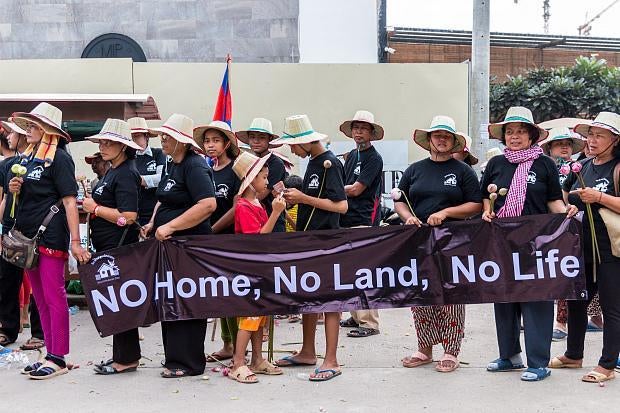 On August 16, 2019, a group of former members of the judicially dissolved opposition party, the Cambodian National Rescue Party (CNRP), announced that the exiled party leader Sam Rainsy and others planned to return to Cambodia on November 9. Since then, Cambodian authorities have arrested dozens of people. More than 50 former CNRP members have been charged with crimes and 31 have been jailed. Arrests are continuing. Among the charges routinely being filed are plotting against the state, incitement to commit a felony, and discrediting judicial decisions – all of which appear to be baseless and politically motivated.

Among those arrested or jailed are:

The Cambodian government’s crackdown on the political opposition and other independent voices has caused many CNRP leaders to flee abroad in recent years. On March 12, a court issued arrest warrants for eight leading members of the CNRP who had left Cambodia ahead of the July 2018 election – Sam Rainsy, Mu Sochua, Ou Chanrith, Eng Chhai Eang, Men Sothavarin, Long Ry, Tob Van Chan, and Ho Vann. On September 26, the court, without factual basis, charged all eight with attempting to stage a coup. The justice system has also been used to harass and prosecute former CNRP members remaining in the country.

Prime Minister Hun Sen has repeatedly threatened to arrest any CNRP leader in exile who returns to Cambodia. On September 17, he declared that 10 ASEAN countries had received Cambodian arrest warrants for Sam Rainsy.

The updated Human Rights Watch Cambodian political prisoner webpage includes those being held in pretrial detention, including former members and supporters of the CNRP, rights activists, dissidents, journalists, and ordinary citizens who expressed their opinions online. Previously held political prisoners – who have been subsequently released because they served their sentence, were released on bail while awaiting trial, or received a royal pardon – are also profiled on the page in a separate section.

“The Cambodian government is rapidly filling its jails with activists who dare speak out about abuses, post criticism on Facebook, and meet opposition colleagues for Khmer noodles,” Robertson said. “EU decision-makers should be considering Cambodia’s deep downward spiral on human rights when looking toward next steps on rights and trade relations.”