Domestic violence is commonplace in Tajikistan. In 2016, United Nations Women, relying on limited government data, found that at least 20 percent of women – and likely many more – report being abused by their husband or partner. Also, there is no criminal offence of domestic violence in the law. Senior researcher Steve Swerdlow speaks with Amy Braunschweiger about the abuse women endure at the hands of intimate partners, and how oftentimes no one – from the police, to doctors, to their own families – will help.

What is happening in Tajikistan in terms of domestic violence?

Reports indicate that at least one out of five, and probably more, women in Tajikistan have been abused by a current or former husband or partner. The number is likely much higher, but the government doesn’t systematically collect the information, and women are reluctant to report abuse. Some studies have claimed that as many as 97 percent of men and 72 percent of women say domestic violence is normal, expected, and should be tolerated in a marriage.

Domestic violence is not a distinct crime in Tajikistan. It is treated as an administrative infraction, although people can be prosecuted for common assault and battery.

However, Tajikistan did pass a law in 2013 that allocated more resources to fight domestic violence. It led to the opening of women’s centers and put money into educational programs and hospital programs. It’s an important step, but more needs to be done.

What type of abuse did you see there?

We documented beatings with a burning brick to the face, a shovel, a broom, a stick, a fireplace poker. Women also told us about their husbands or partners raping them repeatedly, starving them, or even refusing to let them use the toilet.

I encountered horrific stories all over Tajikistan, and it was deeply unsettling. At Human Rights Watch, I typically work on political and civil rights in Central Asia. I’ve documented torture done by police officers and jailers acting as part of an authoritarian system. And what I found traveling across Tajikistan with my colleague, Viktoriya Kim, hearing women’s stories, was that domestic violence is just as sadistic. Men were abusing their wives in ways that amounted to torture, often for years. 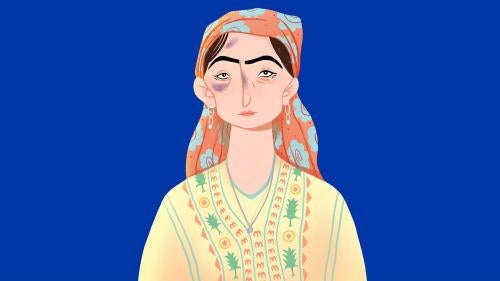 Did any stories stand out to you in particular?

I met a woman who was married for 14 years to a man who forcibly shaved her head, doused her with dirty water, and made her stay outside in a garage in freezing weather. He also shot her, raped her, stabbed her, beat her, and generally humiliated and insulted her, often for no reason.

I met another women who had only been married for two years when her husband hung her by her arms from their ceiling for hours. He also raped and beat her.

In many cases, women would confide in their mothers, who would explain to them that, while terrible, their duty and obligation were to preserve the family at all costs, and they should keep quiet about the abuse.

I met a woman and her mother. They sat beside each other as the mother shared, with great regret, how after she told her daughter to go back home, her daughter’s husband hit her so hard with a shovel that her spleen burst. The daughter literally came to our interview coughing up blood. I remember watching the guilt on her mother’s face as she said things could have been different had she not insisted her daughter go back.

Wives in Tajikistan live with their husband’s families. This means there are mothers-in-law and other family members – brothers, sisters, fathers-in-law – who can also perpetuate the violence. And then there are the neighbors, police, local officials, prosecutors, and judges who ignore it.

Why is domestic violence such a problem in Tajikistan?

The collapse of the Soviet Union led to profound upheaval, and this tumult created a power vacuum for other types of authority to fill. Tajikistan is a predominantly Muslim country and so in this vacuum, patriarchal norms – like more conservative interpretations of Islam – took on more prominence. After the end of the USSR, a bloody civil war in the early-to-mid 1990s weakened the central government. People were hungry, there were no jobs, and millions of men left Tajikistan to find work, often in Russia.

Women’s rights went backwards. Fewer girls finished high school, especially in rural areas. Although child marriage is illegal in Tajikistan, families began marrying their daughters off earlier so they would have one less mouth to feed.

There was also a rise in polygamy, which is outlawed but still pervasive. Many of the women we interviewed were second or third wives with no legal rights. And there was a rise in unregistered religious marriages (nikoh).

Why does it matter if your marriage isn’t registered?

Under Tajik law, a person can only be married to one spouse, and wives own 50 percent of the marital home and are entitled to alimony. But if you’re in an unregistered marriage, or if you’re a second or third wife, you can’t enforce your property rights. Women told us they stayed with abusive husbands, in part fearing that by leaving, they and their children would end up on the streets.

Also, in religious, as opposed to state, marriages, wives need their husband or a cleric to grant a divorce, making it harder to obtain one.

All of this contributes to women’s dependence on their abusers and inability to flee violence.

How easy is it for men to obtain a divorce?

About a decade ago, the phenomenon of men ‘divorcing’ their wives via text seemingly reached its zenith. These men pointed to a widely disparaged interpretation of Islamic law, under which all a husband has to say is ‘taloq,’ or ‘I divorce you,’ three times to do so. Tajikistan’s government compelled clerics to inform people that this type of divorce isn’t allowed. Yet in a remarkable number of cases, women told me that after their husbands beat them, they would say ‘I divorce you,’ and then threaten to say it twice more. They used divorce as a psychological tool, threatening to throw their wife out of her home and take away custody of her children.

What does happen to women who divorce?

Traditional values dictate they can’t go back to their parents’ home. It’s considered shameful, for both the woman and her parents.

Oftentimes, after a divorce, the court will divide property such that that the ex-wife and her kids are allotted one room in her partner’s or in-laws’ home. This usually means they literally live in the same abusive home, which sets the stage for more violent confrontations. Imagine heating up a pot of tea and seeing your abuser, his new wife, or your former mother-in-law every time you go the kitchen. Sometimes, women said their ex-husbands or in-laws would bar them from using the kitchen or bathroom.

One of our recommendations for this report is subsidized housing for victims of domestic violence.

What do law enforcement officials do when women report domestic violence?

Under the 2013 domestic violence law, the government has mandated gender sensitivity training and have staffed some police stations with female officers trained in handling domestic violence. But most of the survivors we spoke with said police wouldn’t register their complaints or encouraged them to go back to their husbands.

One woman I met, Zebo, described how after her husband – a police officer – beat her, she went to the prosecutor’s office, covered in blood. The prosecutor looked at her and said, “What do you want from me, this is a family matter.” He picked up the phone, called her husband, and told him she was at his office. So, she went to the next building and tried to get help from a judge, and he ignored her, too.

Who is helping these women?

The women’s shelters we visited were amazing places, run by incredible women with very little support. Unfortunately, there are only 4 shelters serving the country’s 9 million people. The women running these places are heroes. They provide legal and psychological support, and job training.

I met Zebo at a shelter, and she showed me the cookies she now sells in the capital, and the clothing she sews and sells. She’s also working part-time at the shelter. She talked about how everyone there helped her get back on her feet and become independent. If these shelters had more resources, they could make a real difference in even more women’s lives