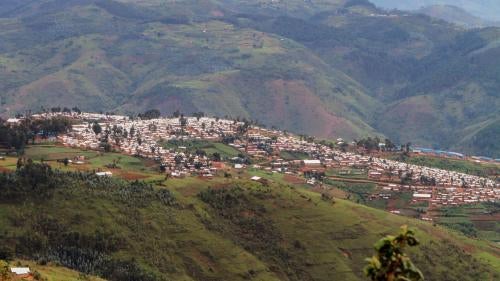 Rwandan authorities have failed to release their investigations of the fatal shooting of 12 refugees by police in western Rwanda on February 22, 2018, Human Rights Watch said today. A year after the killings, the authorities have not revealed how many people were killed nor have they identified those responsible for using excessive force and held them to account.

Rwandan police fired live ammunition on refugees from the Democratic Republic of Congo protesting outside the United Nations High Commissioner for Refugees (UNHCR) office in Karongi District, Western Province, on February 22, 2018, immediately killing at least eight. Another died later that day from her injuries and two pregnant women who had fled the shooting miscarried. Police sent to guard the Kiziba refugee camp killed three people there as they tried to leave to help the wounded protesters, a witness said.

“There can be no justification for shooting at unarmed protesters,” said Lewis Mudge, Central Africa director at Human Rights Watch. “The Rwandan government is trampling on the graves of the victims by refusing to acknowledge how many people were actually killed or holding those responsible to account.”

Over the past year, Human Rights Watch spoke individually with six survivors, five family members of survivors or victims, three sources in Rwanda who have information on the court cases, and one UNHCR representative.

The protests began after UNHCR and the World Food Program announced in January 2018 that they would cut food rations by 25 percent due to funding constraints, including at Kiziba, which hosts over 17,000 Congolese refugees. The food allowance was then reduced from Rwf 7,600 (about US$8.90) to Rwf 5,700 (about US$6.70) per person per month.

Three to four thousand refugees left Kiziba on February 20 and walked for several hours to gather outside of the UNHCR office in Karongi district and protested the cut in food rations. Police shot live ammunition to disperse the crowd as refugees made their way to Karongi, injuring one.

On February 21, a police officer speaking through a megaphone outside the UNHCR office told the crowd of refugees in Kinyarwanda that women and children should be separated from the men and not be “a part of the conflict.”

On February 22, the police encircled the group and again told the protesters at the UNHCR office to separate women and children from the men. The refugees refused. “After we had shouted ‘No!’ I saw tear gas and I thought, OK, they are making us go back to the camp,” one survivor told Human Rights Watch. “But then I heard bullets and I knew this was different. I saw dead bodies and ran into the bush.”

In a statement published on its website on February 23, Rwandan police said that 20 refugees had been wounded and five of them “succumbed to their injuries.” Rwanda’s National Commission for Human Rights (NCHR), which is closely linked to the government, opened an investigation on February 23, but has yet to publish a report. The commission has covered up government violations in the past.

Theos Badege, then the police spokesman, told the media on February 23 that the refugees had been warned, had “defied” the police and thrown objects at them. “It’s important to know that when someone disturbs public order, they don’t control the consequences of their actions,” he said. Rwandan police reported that seven police officers were injured.

At a news conference on March 13, Louise Mushikiwabo, then the foreign affairs minister and now head of the International Organization of the Francophonie (Organisation internationale de la Francophonie, OIF), accused the refugees of starting a revolt, and of becoming “extremely violent and trying to take hostages.”

While refugees temporarily blocked the door at UNHCR between February 21 and 22, Human Rights Watch was not able to substantiate any claims of refugees attempting to hold Rwandan citizens, UNHCR staff, or police officers “hostage.”

Rwandan National Police arrested over 60 refugees between February and May 2018 and charged them with participating in illegal demonstrations, violence against public authorities, rebellion, and disobeying enforcement of law. Some were also charged with “spreading false information with intent to create a hostile international opinion against the Rwandan state.”

Rwandan police are obliged to respect the rights to life, bodily integrity and liberty and security, including by not resorting to the use of fire arms unless necessary for self-defense or the defense of others against the imminent threat of death or serious injury, when less extreme means are insufficient. Police may resort to intentional lethal force only when strictly necessary to protect life.

The National Commission for Human Rights and the Justice Ministry did not respond to a request for information from Human Rights Watch sent on February 1, 2019.

“Prosecuting refugees deflects responsibility from the real culprits of violence and abuse,” Mudge said. “Instead, Rwandan authorities should ensure investigations are independent and hold accountable the police officers responsible for the killings.”

Human Rights Watch interviewed six survivors from the killings at Karongi and Kiziba on February 22, 2018. They said the police were quick to use lethal force in circumstances that were wholly unjustified by the protesters’ actions. Some survivors said that the shooting started within three to four minutes after police started throwing teargas, while others said it may have been as long as 10 minutes. One refugee said:

I washed my eyes with water after they shot the gas. But when it became too thick, I started to run. Just then, the shooting started. I assumed it was in the air, but a young man in front of me fell down dead. I ran straight for the forest. I saw three dead bodies as I ran… The police said we were armed, but they are lying. Most of us put our hands up. Some men threw stones, but once the tear gas started, we started to move away from the area.

An elderly man, who had stayed in Kiziba camp on February 22, described the killings of the refugees who tried to leave the camp:

It was late in the day, and we started getting messages saying that the police had shot on people in Karongi. The police were manning a barrier just outside the camp, but some of the refugees tried to pass anyway. The police did not warn the men for even half a minute before they opened fire on them. I saw a younger man I know, Bizimana, shot down. We were all shocked by what we saw. The Rwandan police have no pity.

Developments After the Shootings

Refugees told Human Rights Watch that since the shootings they had been intimidated by local authorities and the police told them not to cause trouble or say anything negative about the government.

A leader of the Congolese refugees told Human Rights Watch in March: “The government is angry because we dared protest. We can’t even have small meetings without the local authorities’ permission. This government won’t let us say what is wrong in our community.”

In late April, the police increased their presence at Kiziba and sent senior government and police officials to visit the camp.

On May 1, police entered the camp to arrest refugee representatives. Some refugees threw stones at the police and the delegation. The police again responded with tear gas and live ammunition, killing one person and injuring several others.

“The police came into the camp [on May 1], and this time they were very serious,” a refugee said. “We knew they wanted to arrest our executive committee as they openly called the committee [members] enemies on the radio. The police shot teargas and started shooting. Everyone ran, then I ran, and I saw one young man who had been killed.”

At a news conference in Geneva on May 4, a UNHCR spokesperson said that one person died, a 12-year-old boy was injured and that 23 refugees were reportedly arrested “apparently for provoking Rwandan Police patrols.”

The UN Code of Conduct, in addition to spelling out that law enforcement officials may only use force in exceptional circumstances, specifies that they may not “inflict, instigate or tolerate any act of torture or other cruel, inhuman or degrading treatment or punishment.” Under the Basic Principles, in cases of death or serious injury, appropriate agencies are to conduct a review and a detailed report is to be sent promptly to the competent administrative or prosecutorial authorities.

The arrested refugees were charged with participating in illegal demonstrations, violence against public authorities, rebellion, and disobeying enforcement of law.

Three leaders of the refugee camp’s executive committee also were charged with “spreading false information with intent to create a hostile international opinion against the Rwandan state.” All three had signed a letter sent to UNHCR headquarters in Geneva on January 5, 2018, in which the Executive Committee expressed concern that refugees would be living on “US$0.20 a day” after the cuts and wrote of a fear of refugees dying of hunger.

One refugee was accused of sharing information with Human Rights Watch. The communications were used as evidence against him in his trial. He was convicted and sentenced to 15 years in prison on October 31. Other trials have been delayed or postponed, while most accused refugees remain in detention.

In an April 30, 2018 statement, the Ministry of Disaster Management and Refugees accused the refugees’ executive committee of “mobilizing refugees to revolt against government officials” and dissolved the committee.

The National Commission for Human Rights

On March 9, 2018 the National Commission for Human Rights (NCHR) stated it was investigating the killings and would publish a report “in due time.” The statement shows a bias towards the police and asserts the police were “attacked while trying to quell violence” and that the protest “caused injuries and death of some protesters.” The report has yet to be released.