Shackling people with mental health conditions has been commonplace in Indonesia for years. Pictures of emaciated men and women chained to their hard, wooden beds are hard to get out of your mind. But there is some hope. The number of people in shackles has dropped from 18,800 – the last-reported figure – to 12,800 in July 2018. Sodikin and Asep are two of the people who have been freed.

There used to be a hut next to a family’s home in Cianjur, West Java. In it, a man named Sodikin lived locked up and unable to stand. He ate, slept, and went to the bathroom in the hut, which had one window no bigger than the palms of his hands. His light at night came from a solitary lightbulb his family hung in the hut.

Everything changed when Indonesia decided to support people with mental health conditions – and their families. Now Sodikin goes to work each day and earns money to support his family – the same people who left him shackled for eight years. He has made friends; he has learned skills.

His family burned the hut to the ground. A garden grows there now.

“The thing with this family is that they did try,” said Kriti Sharma, senior disability rights researcher at Human Rights Watch.

The family was given medicine for Sodikin, and it helped for a while, but then when it came time for a refill of his prescription, no one provided it. The local healthcare center told his father to go back to the hospital. But after he walked the day-and-a-half to get there, the hospital turned him away, saying he had to get the refill locally.

“They didn’t know what to do, so they gave up,” Sharma said. That’s when they began shackling Sodikin. 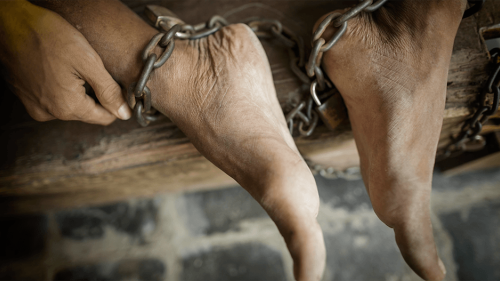 “Dusk was falling as we walked down this dirt path and I saw the parents and said, ‘We hear your son is here, can we speak to him?’”

The father pointed to the hut, which stood next to the family bathroom.

“I thought, ‘It’s not possible someone is living in there,’” said Sharma. “I peered in this tiny hole and he was just sitting there, all skin and bones, with his head hanging down.”

When Sharma returned two years later to finish her report “Living in Hell: Abuses against People with Psychosocial Disabilities in Indonesia,” Sodikin was still there. Sandi, his brother-in-law, was the only family member who was looking after him.

“I left feeling so hopeless,” Sharma said. “I was sure he would die in that shed.”

Since then, the Indonesian government has been working to end shackling by providing community-based mental health services. Community health centers known as puskesmas work directly with families going house to house to collect data, raise awareness, and provide support. The local healthcare centers are now stocked with medication and take it to the families when they can’t travel. More than 16.2 million homes now have access to community-based support.

Despite this progress, as of July 2018, 12,832 people with psychosocial disabilities – mental health conditions – remain shackled or locked up in confined spaces. This is down from 13,528 in December 2017. People with psychosocial disabilities also continue to be arbitrarily detained in faith healing centers, social care institutions, and mental hospitals.

Faith healing centers have little oversight, and people with psychosocial disabilities are often shackled, abused, and forced to take alternative “treatments” such as concoctions of “magical” herbs, vigorous massages by traditional healers, and Quranic recitation in the person’s ear.

But for Sodikin, transformation began when a nongovernmental organization rescued him. Sandi had to carry Sodikin out of his hut because his muscles had atrophied so much he couldn’t walk.

He was taken to a shelter run by the nongovernmental organization, where he was finally given the help he needed.

He stayed at the shelter for six months and slowly began to recognize people, including Sandi, who had joined the family several years after the shackling began and whom Sodikin had never really known.

“Now the breadwinner in this family is [Sodikin],” Sandi said. “The most valuable moment would be when I see him giving my kid some pocket money. I was quite surprised he could be that kind to my kid.”

Sodikin now works at a clothing factory stitching buttons onto boys’ school uniforms. The past eight years have been a blur for Sodikin, being shackled was so traumatizing that he has blocked out years he spent in the hut. But sometimes he has moments when he remembers being in chains.

“He does sometimes ask his parents ‘How could you do this to me?’ when he remembers,” Sharma said. “They have asked his forgiveness multiple times.”

Families in Indonesia often feel desperate when someone in their family starts displaying signs of a mental health condition. There is a lot of stigma in Indonesia surrounding mental health, and when Asep started declining his neighbors complained about his behavior.

“The family didn’t want to see him shackled, it was sad to see it,” Asep’s sister Ernawati told Sharma.

“The first time he was in shackles, everybody was crying, we had no option.”

Asep was found shackled at the waist in an abandoned house opposite his family’s home. The chain was so heavy it took rescuers 15 minutes to saw through it.

“He was found by a community worker who was going door-to-door as part of the new program,” said Sharma. “She was told there was a man shackled in the building, otherwise looking at it you would never know someone lived there.”

When he was freed from his shackles, Asep spent a month in a mental hospital, and after his release the local community health center made regular follow-up visits to his home. These visits enabled the family was able to keep him out of chains.

“They even did a briefing in the village to explain why shackling people with mental health conditions is never okay,” Sharma said.

Asep has changed a lot since he was first found by the outreach worker.

“The day he was released, he hung his head and did not make eye contact,” said Sharma. “His sister thought he was embarrassed to be found like that.”

The derelict house where he was shackled is no longer there. Now ponds have been created on the site. These days, Asep farms fish in the ponds. On an island in the middle of the ponds stands a chicken coop, and he also feeds the birds calmly and gently.

“He’s a man of few words,” Sharma said, “but when you ask him what it is like to be free he says, ‘In chains I felt rigid all the time, I am happy now I am free.’”