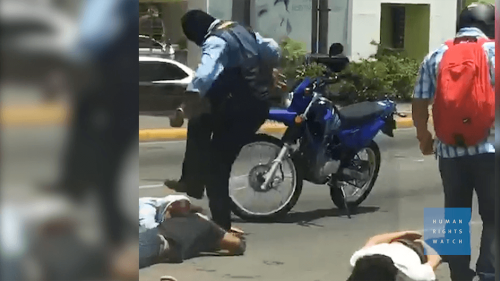 Nicaraguan President Daniel Ortega has promoted Luis Alberto Pérez Oliva to general, the police force’s highest rank. The officer has been linked to horrific abuses during this year’s crackdown.

Pérez Oliva directs the "El Chipote" detention center, the "main place" where authorities perpetrate egregious abuses against anti-government demonstrators, according to a recent report by the Office of the High Commissioner for Human Rights (OHCHR). The human rights body documented allegations of rape, electrocution, lacerations with barbed wire, beatings with steel tubes and strangulation – among others – against protestors across the country. Hundreds have been detained in El Chipote since the crackdown on dissent began in April 2018.

Human Rights Watch obtained testimony of two cases where El Chipote authorities repeatedly refused to comply with court orders to provide medical attention to detainees or allow a judge to verify the detention conditions. News reports and testimony obtained by Human Rights Watch indicate detainees have been forced to record confessions incriminating themselves or other protestors to obtain release.

In one case, El Chipote authorities refused to disclose the whereabouts of four activists for several days after police took them into custody. OHCHR considered this a case of enforced disappearance. Two male activists were beaten and forced to hold straining positions for several hours and a female activist was forced to remain in her underwear, relatives said. The four activists were accused of crimes including terrorism; they remain in detention in another facility.

Pérez Oliva has also been directly implicated in the operations of a clandestine detention center where armed pro-government gangs committed egregious abuses against protestors, according to testimony obtained by Human Rights Watch. A demonstrator held there said masked men hung him from the ceiling and beat him with baseball bats, tubes, and guns for two days. After, he said he was taken to a masked man he recognized from his voice and build as Pérez Oliva, who forced him to film a confession implicating other protestors.

Yesterday, at the opening of the UN Human Rights Council’s 39th session, High Commissioner for Human Rights Michelle Bachelet called on the council to “take all available measures to address the serious human rights violations” documented in Nicaragua. The international community should use all the means at its disposal to ensure truth and justice for victims, including convening an urgent debate during the current Human Rights Council sessions.