Rape survivors in Mauritania have nowhere to turn to get help from the government. With one forensic doctor for the whole country and no government-run women’s shelters, women and girls can find themselves lost and abandoned in the midst of a traumatic experience. Even worse, rape survivors can find themselves arrested and prosecuted for having sex outside marriage, a crime known as zina, if they report an attack and can’t prove they didn’t consent. But the news is not all bad. While researching her report “They Told Me to Keep Quiet: Obstacles to Justice and Remedy for Sexual Assault Survivors in Mauritania,” Human Rights Watch researcher Candy Ofime not only met sexual violence survivors, but also a rich and vibrant network of people who were pouring their time, energy, and lives into helping women and girls. Here are a few of them. 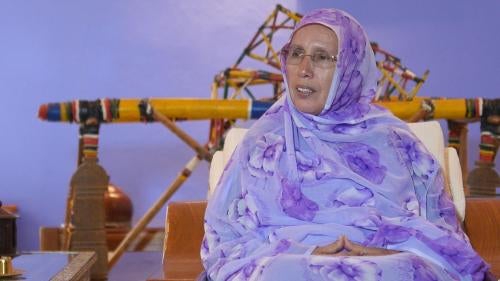 Always dressed in the brightly colored melahfas, traditional clothes that some Mauritanian women wear, Mint Ely strikes an imposing figure as she attends the court cases of the women she is helping, visits her organization’s centers scattered all over the country, and speaks to her network of social workers.

Meeting her, it seems almost as if she carries the stories of the women and girls she has helped with her, in the determination behind her eyes, in the lines on her face, and in her frustration that change hasn’t come quicker to Mauritania.

Coincidentally, the headquarters for her group sits across the road from the guest house Ofime stayed in during her first trip to Mauritania.

“She came to breakfast with me,” Ofime said. “Her passion and expertise were striking, she was very inspiring to me.”

The group can’t offer a place to stay for women and girls trying to flee violence and rape, but that doesn’t stop Mint Ely, who regularly has women and girls staying with her for a night or two when they have nowhere else to go.

“Her staff trusts her, and that trust radiates among the survivors with whom they are working.”

Never one to sit in her office, Mint Ely braves the poor roads and Saharan heat to travel around the country, checking in with her network of contacts and speaking to people in rural communities, which are also affected by these issues but sometimes forgotten.

“[Many of] the victims are from the most disadvantaged families, the poorest, most marginalized communities, including survivors of slavery or its consequences,” she told Ofime. Her group teaches literacy classes and tries to help women out of poverty.

Mauritania was the last country in the world to legally outlaw slavery, abolishing it only in 1981 and making it a crime in 2007.

Mint Ely is also working to help pass a law on gender-based violence, which would give women and girls some level of protection, although zina would still be seen as a crime if the government refuses to amend the draft law currently before Parliament.

“When someone commits rape, they must answer for their act,” Mint Ely said. 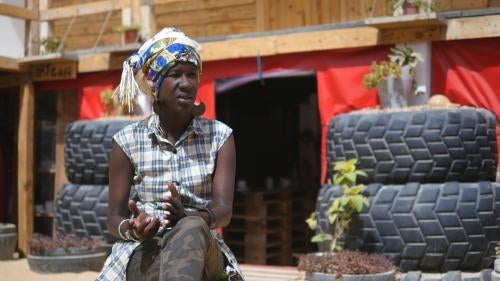 One day, Mint Ely went to an exhibition by a local artist, stood in front of the canvases, and was overwhelmed by the power of the paintings.

The artist was Amy Sow, an Afro-Mauritanian who owns and manages an art gallery in Nouakchott, Mauritania’s capital.

The exhibition tells the stories of victims of gender-based violence. Visitors walk into a dark room. Larger-than-life portraits of women who have been raped or assaulted hang in the darkness, above details of their attack. Visitors are given a hand-held light, and to see anything they must literally shine the light on the survivors, illuminating their pain.

Beyond the darkness where the portraits hang, the gallery itself is light, bright, and made up of recycled wood, tires, and other materials. It is one of the first art galleries to be owned and operated by a Mauritanian woman, and Sow uses her space to support other local artists and to create art with a message.

“She’s very conscious about how she uses her art,” said Ofime, who met with Sow on a baking hot Sunday and interviewed her sitting on repurposed tires in the leafy courtyard outside the gallery. It was then that Sow told Ofime that she herself was a rape survivor.

“It really moved me,” said Ofime. As in many countries, many rape victims walk through life without telling a soul.

Wearing her signature head scarf, Sow described her exhibition as a “woman’s cry out;” a way for women to say no to violence and insist that criminals be tried.

“To me, she is working to break the silence on this issue using an artistic lens,” said Ofime. 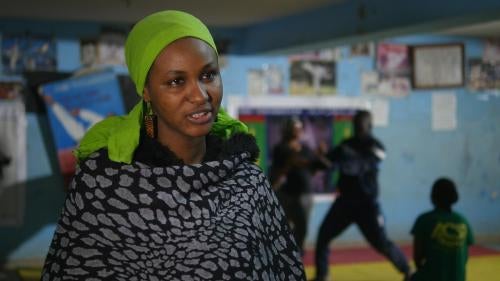 Ofime headed to a youth center, navigated among some 50 boys yelling as they played soccer on the playground, walked down an alley around several corners, and eventually found herself inside a tiny room full of girls ready to fight.

The energy of the room swept over her as she entered.

“Some girls were coming in, taking off their traditional outfits, and had sports clothes underneath and they were just ready to go,” Ofime said.

The girls, largely between 14 and 18, are being trained in self-defense and self-empowerment. The energy bubbled in the tiny room as the mostly male instructors showed the girls how to break holds and throw attackers onto the mats that covered the floor.

The founder of RIM Self Defense, Dioully Oumar Diallo, arranges for the girls to be picked up from their neighborhoods and safely dropped off again after each class. Ofime first came across Diallo in a YouTube video, where she speaks about her fight against violence against women. In addition to the self-defense classes, Diallo built the TaxiSecure app that allows women and girls to send an emergency signal via their mobile phones when they feel under threat in a taxi – a place many activists identified as dangerous for women and girls to be alone.

It was Diallo’s innovative thinking that made Ofime want to meet her to speak about the future of activism in Mauritania. Diallo wants to give women the skills they need to protect themselves and fight back.

“Young women like her are the future of women’s rights activism in Mauritania,” Ofime said. “They are creating these new empowering spaces and pushing the conversation forward, and they are unapologetic about that.”

For Diallo, the message is simple: “They do not have to be afraid, they have the right to be able to defend themselves, because their body belongs to them,” she said. 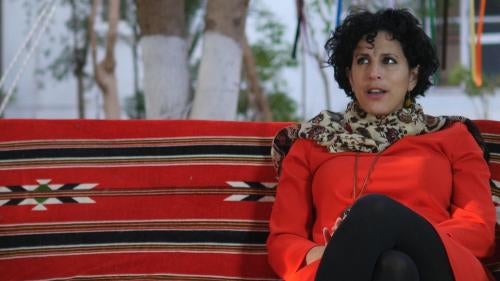 With just one forensic doctor in the entire national public health system, the chances that a woman who is raped will get the proper medical tests and certificate to prove it are slim. And lack of adequate medical records can reduce their likelihood of success in court.

Amparo Fernández del Río is the coordinator of the Mauritania office of the nongovernmental organization Médicos del Mundo, the Spanish affiliate of Médecins du Monde. Fernández del Rio is seeking to break down the plethora of barriers that women meet when trying to get medical care after experiencing sexual violence.

Fernández Del Rio works with local groups to make sure rape survivors get the full spectrum of support they need. But it is the unit her organization created, based in the Mother-Child hospital in Nouakchott, that provides the kind of medical care most needed in the first 24 hours after an attack, from medication, to surgery, to psychological support. The unit provides all of this free of charge.

“We provide care without the obligation of going first to the police,” she told Ofime.

Sometimes, doctors in Mauritania refuse to examine rape survivors unless they have a police referral. This forces many women and girls to report their attack to the police just to get medical care.

There is also a severe lack of professional psychological help available, which Fernández del Rio is working to remedy. In May, a full-time psychologist joined the unit – the only one in Mauritania dedicated to helping women and girls who have been raped.

Fernández Del Rio also found out that rapes were recorded as “accidents on public thoroughfares” the same category used for car crashes, making it impossible to gather any reliable disaggregated data about rape and sexual violence in the country.

“She saw all these systemic issues, and she’s just been tirelessly working with policy makers to fix them one after another,” Ofime said.