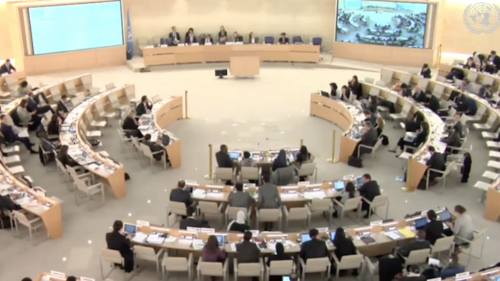 The values enshrined in the Universal Declaration of Human Rights are as relevant and timeless today as they were 70 years ago. During this celebration of its adoption, it is important to acknowledge the gap between its promise and its implementation.

This is a challenging time for human rights advocates: a time when many human rights norms and standards are under threat, when we are witnessing a rise in xenophobic populism, profiling on racial and religious grounds, attacks on human rights defenders, and pushback against multilateral institutions, including this Council.

It is therefore timely to reflect on what “universality” means, 70 years on, and its applicability to today’s challenges:

It means that all human beings are entitled to full realization of all of their rights, without exception.  It means that migrants don’t check their human rights at the border, despite the Hungarian foreign minister’s shameful assertion to this Council that people are entitled to human rights “where they live,” and that “migration is dangerous … and we have to stop it.”

It means that there can be no category of “second-class humans” - whether they be Rohingya Muslims facing ethnic cleansing in Myanmar, women facing sexual violence in South Sudan, people of color subject to racism in policing in the US, Uyghurs and Tibetans unable to freely practice their religion in China, alleged drug users summarily executed in the Philippines, or LGBT people facing violence and discrimination in Russia.

It means bringing full attention to economic, social and cultural rights, as well as civil and political rights, and it also means an end to selectivity: no state should be above scrutiny, and Council members such as Egypt, China, Saudi Arabia, and Venezuela, should expect that their own human rights records will be subject to particular scrutiny during their time on the Council.

Of course, the opposite of universality is relativism, and as the Secretary-General reminded us at the session opening: “we must overcome the false dichotomy between human rights and national sovereignty.” To this end, we urge states to resist attempts to insert a relativist agenda into UN resolutions, such as we see in China’s resolution on development, and draft resolution at this session on “win-win” cooperation.

The Vienna Declaration and Program of Work affirms the essential work of civil society, and we call on all states to repeal pernicious “foreign agent” laws and other legislation designed to impede the work of nongovernmental organizations.

Similarly important is strengthening multilateral human rights institutions, not defunding, undermining or threatening to walk away from them.

The UDHR hasn’t changed. It’s withstood the test of time. But has our commitment to its values? I would ask the panelists: what do you see as the current challenges to its implementation, and how can members and observers of this body work together across our differences to meet those challenges?