Over the last decade the Islamist armed group Al-Shabab has recruited, often forcibly, thousands of Somali children – under age 18, using many as fighters on the front line. Over the last two years, Somali security forces have arrested suspected Al-Shabab sympathizers – including children. Senior Africa researcher Laetitia Bader spoke to Audrey Wabwire about what happens to these boys in detention, and why protecting their rights has proven elusive.

How is it that children get involved with Al-Shabab in the first place?

Al-Shabab uses many means to recruit children, including enticements, deceit and force. Poor rural communities, with little protection, are particularly vulnerable to this sort of pressure.

Some boys I spoke to said they were taken at gunpoint from Quranic schools, where children receive religious instruction. Sometimes they are told that that they are going to a Quranic reading competition. One boy went to such a competition and won. After winning, he thought he would get a chance to go to another school, and he was dropped off at a school. Later that night, Al-Shabab fighters picked him up and took him to a training camp. He was then trained with other children and sent to fight in Puntland. His father had encouraged him to take part in this competition because he thought he would get money or a prize. This boy was in prison when I was spoke to him, and his father now feels guilty for encouraging him.

Security forces also conduct mass sweeps where they cordon off an area of a recent attack. They then arrest young men or boys in the area for further interrogation. Some boys who are picked up in mass sweeps on flimsy evidence never get to a chance to give their side of the story – including those with no connection at all to Al-Shabab. 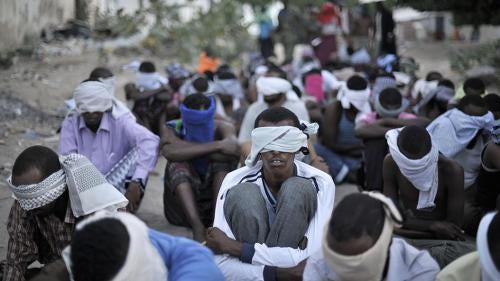 What is life like for a child who is arrested for being a member of Al-Shabab?

Their life is tough. Boys picked up for security offenses can spend months in detention, held for coercive interrogations, in dark cells, unable to sleep for days because there is no space to lie down. One boy said he got unbearable headaches because he never slept. They are detained with adults, sometimes violent criminals. One boy told me he was hit by a guard when he complained about being locked up with adults. And only those from powerful clans or who are better off financially have any chance of being allowed to get in touch with their parents.

One boy who was 16 when he spent months in the custody of the intelligence agency in Mogadishu, the capital, described being repeatedly interrogated. He was also badly beaten and left with a deep wound. I saw a scar left by this injury.

The conditions are poor. Although children sleep separately from adults, they mingle with adults in a common area during the day including during meal times. At the time of our visit, each child had a mattress on the cement floor, although officials pointed to bunk beds that were being built for the juvenile section. They appeared to have little opportunity for exercise apart from playing in a large open-air courtyard that the adults also use.

The children had no access to education, although we have heard recently that they may be starting to offer some classes.

What happens to the boys when they are released?

None of the boys I spoke to were unscarred by the experience.

Two boys told me they dropped out of school. One felt his reputation was tarnished. A 15-year-old boy  said that for people his age, the fear of being recruited by Al-Shabaab or arrested by security forces for being at the wrong place at the wrong time leaves them with very little freedom because they have to constantly watch out for both Al-Shabab and security agents. Several said they’d stopped doing what normal teen-age boys like to do: hanging out in the streets with their friends.

Over 250 children have been handed over to the United Nations and its child protection partners for rehabilitation. This is in line with the government’s commitments. But too often, this has only happened after significant pressure on the authorities, and after the kids have spent months in detention.

Was there any child who really stood out for you?

There was a 15-year-old, an orphan, who was picked up in a security operation in 2015 following an assassination in his neighborhood. He was held at a police station in Mogadishu for several weeks. Others were released to their relatives, but he had no one coming for him, no one bringing him food. They insisted that he must be an Al-Shabab fanatic because he had no friends or family.

One boy was recruited at 14 and spent two years in Al-Shabab’s ranks. Al-Shabab fighters beat him when he tried to find a phone to call his family. He eventually ran away with other boys.

Other boys described the dangerous military operations for Al-Shabab that made them decide to flee. The boys often also got malaria while training. They lived outside in poor conditions, and sometimes the nights were cold and made them particularly miserable.

Why shouldn’t the boys be arrested? The Somalia government has a duty to protect against Al- Shabaab.

Even if a child has committed a serious crime, they still need protection. Under Somalia’s international legal commitments, detention should be the last resort and for the shortest time possible since it is traumatic for children. They need access to their family and to lawyers. They also need to be kept separate from adults.

Somalia’s constitution defines children as 18 and under, though laws in other regions make 15 the age of maturity. Children are also criminally responsible from 15 onward. Even when children commit serious crimes, though, international law requires the justice system to treat them differently than adults, providing greater protection and prioritizing rehabilitation over incarceration. While Somalia has laws that spell out protections for children charged with crimes, these are rarely implemented. The laws need to be harmonized and reformed so that Somali children are protected within a functioning juvenile system.

What can parents do if their children are imprisoned?

I conducted most of my interviews for our report in early 2017, after Mohamed Abdullahi Mohamed, known as “Farmajo,” had recently been selected as president. There was an atmosphere of promise and hope in much of the country. The detained boys and their parents were hopeful, too, and believed that there would be justice in their cases if they could be reviewed.

Many parents I spoke to were scared because their children have been sentenced by Somalia’s military court. They feel that if they appeal, they will make things worse. Lawyers at the court told them that appeals worsen the situation, even though this is not always the case. A lot of recruitment happens in rural areas where parents have no means to seek redress for their children who have been treated improperly.

How did you do this research?

I traveled around Somalia in places where children had been arrested, such as Garowe in Puntland. I also traveled to areas where recruitment has been high, for example the Bay region. I spoke to relatives, to understand how children get caught in -- and leave -- Al-Shabab, and what happens when they return home. In Mogadishu, I spoke to boys who had been arrested during security operations. I also interviewed government officials and visited Mogadishu central prison’s juvenile section, where boys sentenced for Al-Shabab-related crimes are being held.

What’s it like working on a country that faces conflict and insecurity? What keeps you hopeful?

What keeps me hopeful? The incredible stories of survival and hope. It was inspiring to hear from parents who, despite what their children went through with Al Shabaab and while detained by the government, believe that systems can improve.

Incredibly, the boys still have hope for their future, despite dropping out of school and losing friends. One 16-year-old who had spent three months in Puntland prison said he was happy to be receiving education while in prison. There is an education program in the prison because of international support. He said that with his knowledge of English, he could later become a translator.

The Somali government has genuine security concerns. However, so many people still believed it was worth their while telling us their story. No one had ever shown interest in these boys or asked them what happened. It was a privilege to hear these often painful accounts for the first time, and to let us tell their story.