(Beirut) – Lebanon’s Internal Security Forces should investigate reports of unlawful use of force against protesters and journalists at a December 10, 2017 demonstration near the US embassy in Awkar, Human Rights Watch said today. The Internal Security Forces (ISF) should immediately open an impartial investigation, ensure accountability for any excessive or indiscriminate use of force, and cease further unlawful violence against demonstrators.

Demonstrators had gathered to protest the United States decision on December 6 to recognize Jerusalem as the capital of Israel. Witnesses said that although the protest turned violent, with some protesters throwing rocks at security forces, riot police reacted indiscriminately and excessively, using water cannons, rubber bullets, teargas, and batons. Videos and photos from the protest appear to corroborate these statements. 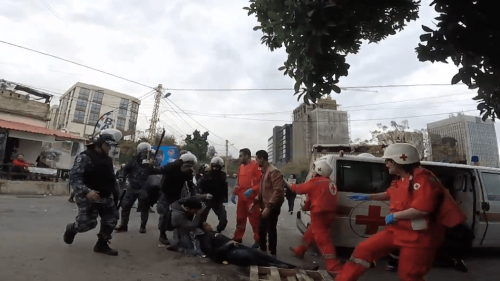 “Police should be managing the crowds at protests professionally, not jumping into the fray and using force indiscriminately,” said Lama Fakih, deputy Middle East director at Human Rights Watch. “We are concerned that this pattern of excessive force against protesters will continue until authorities end the current climate of impunity.”

The Internal Security Forces, in a December 16 response to a Human Rights Watch query regarding investigations, said that they would “take necessary measures against those of our members who violated the law.” They added that those violating the laws “were very few – these actions are very limited and individual – among hundreds of participants in the mission, who have achieved the utmost restraint and respect for security and order procedures that respect the principles of human rights.”

The Internal Security Forces should proactively and impartially investigate all credible allegations of abuses, Human Rights Watch said. Where they find evidence of serious violations, they should refer those individuals, whatever their rank, to Lebanon’s public prosecutor for prosecution in accordance with international standards.

Human Rights Watch spoke with seven protesters and journalists who were at the demonstration and reviewed videos and photos from the protest. Videos show police officers beating people with batons, and two videos showed police officers in separate incidents kicking people as they lay on the ground.

All seven witnesses said that police appeared to use force on protesters who were not violent or were in custody, and against journalists. One protester said that police kicked him in the back and legs and hit him with batons as he was attempting to help a person who had fallen unconscious.

“I remember officers just stampeding people and just starting to beat people who were already on the floor, they were going after everyone,” said one witness. “They weren’t differentiating between people who were part of the protest and media.”

Witnesses and journalists also said that police told them they were not allowed to film or take photos. One journalist said that police fired a rubber bullet directly at him from less than five meters away, for which he was treated at a hospital. He said police hit journalists, knocked their cameras to the ground, and told them they were not allowed to photograph the protest. Another journalist said that a police officer hit her with a baton as she was trying to film.

Lebanese media reported on December 15 that six protesters, including a child, appeared before the Military Tribunal on charges of rioting, assaulting police, and destruction of property. Human Rights Watch opposes the use of military courts to try civilians and children, and has found that such trials in Lebanon do not respect due process rights and violate international law.

Human Rights Watch and local human rights organizations have long documented the unlawful use of force by security agencies against protesters in Lebanon. Lebanese military personnel beat and kicked protesters demonstrating against a third extension of parliament’s term on June 16, 2017. And on August 22 and 23, 2015, Lebanese security personnel used rubber bullets, teargas canisters, water cannons, rifle butts, and batons at a protest in downtown Beirut over a waste management crisis and corruption.

Impunity for violence by security forces is a recurring problem in Lebanon. Even when officials have initiated investigations into previous incidents of excessive, and in some cases, lethal violence against protesters, the investigations have often not been concluded or made public. Although the Lebanese army announced an investigation into the June 16 incident, it has not made the results public.

Law enforcement officers are permitted to use force to disperse protests that turn violent. But the development and deployment of nonlethal incapacitating weapons should be carefully evaluated to minimize the risk of endangering people who are not involved and the use of such weapons should be carefully controlled. Whenever the lawful use of force and firearms is unavoidable, law enforcement officials must exercise restraint and act in proportion to the seriousness of the offense and the legitimate objective to be achieved, while minimizing damage and injury.

The United Nations Human Rights Committee, which monitors compliance with the International Covenant on Civil and Political Rights, ratified by Lebanon in 1972, has called on governments to ensure that regulations governing the use of force and weapons by police conform fully with the UN Basic Principles on the Use of Force and Firearms and that “any violations of these rules be systematically investigated in order to bring those found to have committed such acts before the courts; and that those found guilty be punished and the victims be compensated.” Lebanese authorities should allow an independent review of police conduct during the demonstrations, and use maximum restraint in response to protests.

“Although police can use force to control a protest in certain cases, that does not mean they have the right to use it against protesters and journalists indiscriminately,” Fakih said. “International donors funding the Internal Security Forces should pay careful attention to how their money is being used.”