(Geneva) – The United Nations Minamata Convention on Mercury, which went into effect on August 16, 2017, could benefit millions of people affected by toxic mercury, Human Rights Watch said today. Under the treaty, governments are obligated to protect their citizens from the harmful effects of mercury and to put in place controls in polluting industries, such as artisanal and small-scale gold mining and coal-fired power plants.

Mercury, a shiny liquid metal, attacks the central nervous system, can result in lifelong disability, and is very harmful to children. It can be lethal in higher doses. 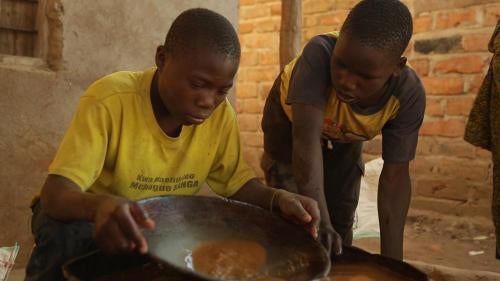 “Millions of children and adults around the world are exposed to mercury on a daily basis,” said Juliane Kippenberg, associate children’s rights director at Human Rights Watch. “The Minamata Convention strengthens governments’ obligations to protect people’s rights to health and to a healthy environment from this toxic substance.”

The Minamata Convention was adopted in 2013 in Japan. It is named after the Japanese fishing town of Minamata, where mercury was discharged into the bay by a large chemical company from 1932 until 1968. Japan officially recognized that more than 2,955 people suffered mercury poisoning as a result, but subsequently compensated about 60,000 people. The actual number of victims is thought to be even higher.

Human Rights Watch has documented exposure to mercury by children and adults working in artisanal and small-scale gold mines in Ghana, Mali, Nigeria, Tanzania, the Philippines, and Papua New Guinea. Mercury is mixed into the ore to attract the gold particles. The resulting gold-mercury amalgam is then held over a fire, where the mercury is burned off, leaving raw gold behind.

Although mercury is particularly harmful to children, some children work regularly with mercury from young ages, unaware of the health risks. Children are also exposed to mercury fumes when their parents or older siblings burn the amalgam in their homes. Fifteen-year-old “Michelle” from the Philippines told Human Rights Watch that she had started processing gold with mercury at age 8, and started to suffer spasms – a typical symptom of mercury poisoning – a year later. She had never sought medical care or received a diagnosis.

The Minamata Convention obligates member countries to promote mercury-free gold processing methods; take special measures to protect vulnerable populations, including children and women of child-bearing age from exposure; and put an end to particularly harmful practices in gold processing, such as burning the mercury-gold amalgam in residential areas. Member countries commit to improving health care services for populations affected by exposure to mercury. The treaty also regulates other important industries, such as mercury use in products and manufacturing processes, and emissions from coal-fired power plants.

Currently, 74 countries are parties to the Minamata Convention, including important gold mining and donor countries – among them Peru, Brazil, Ghana, Canada, the United States, and Switzerland. On May 18, the European Union and seven EU member countries ratified the convention, bringing the total number of ratifications more than 50, triggering the entry into force on August 16. The first Conference of the Parties will take place from September 24 to September 29 in Geneva, Switzerland.

The Global Environmental Facility, a multi-donor trust fund, has been designated in the treaty to provide financial support to governments from developing countries that seek to take action on mercury and has already started funding programs.

“Now that the Mercury Convention is in effect, governments have to walk the walk and put the treaty into practice,” Kippenberg said. “People suffering from mercury poisoning need swift protection and treatment.”