In 1982 Bobby Wilcher stabbed to death two women he met at a Mississippi bar. Twelve years later Lindy Lou Wells served on the jury that sentenced him to die – a decision that unexpectedly upended her life. The documentary Lindy Lou, Juror Number 2, featured in the Human Rights Watch Film Festival, takes a nuanced look at the death penalty in the US while it follows Lindy on her journey to reconnect with the trial’s other jurors. Amy Braunschweiger talks with her about the trial and her search for forgiveness.

The trial was in 1994. What was your take on the death penalty before this trial?

They asked me if I could deliver the death penalty without problems. And I said, sure, he killed somebody, I can do it.

Being in the conservative South, being a Baptist, a person of faith, and a Republican, you’re brought up here with the notion that if someone murders somebody the death penalty is a just punishment. It’s eye for an eye. It’s just the way that you come up, you don’t question it, you don’t think about it.

As I sat there in that jury box, and I watched him and everyone else in that courtroom, I’m thinking, oh my gosh. This guy had no one. His sister was his only defense, and the only thing she said was, “Please don’t kill my brother.” I just got this overwhelming compassion toward this young man. I can’t even tell you what it was about him – he scared some of the other women on the jury.

When we went into the deliberation room, a panic attack or anxiety came over me. I remember walking to the window the day before we were supposed to give the sentence, and I looked outside and everyone is just shopping and going to stores, and I wanted to scream, “You’re down there acting like everything is wonderful and we’re fixing to kill a man.” There’s something wrong with this picture.< /p> 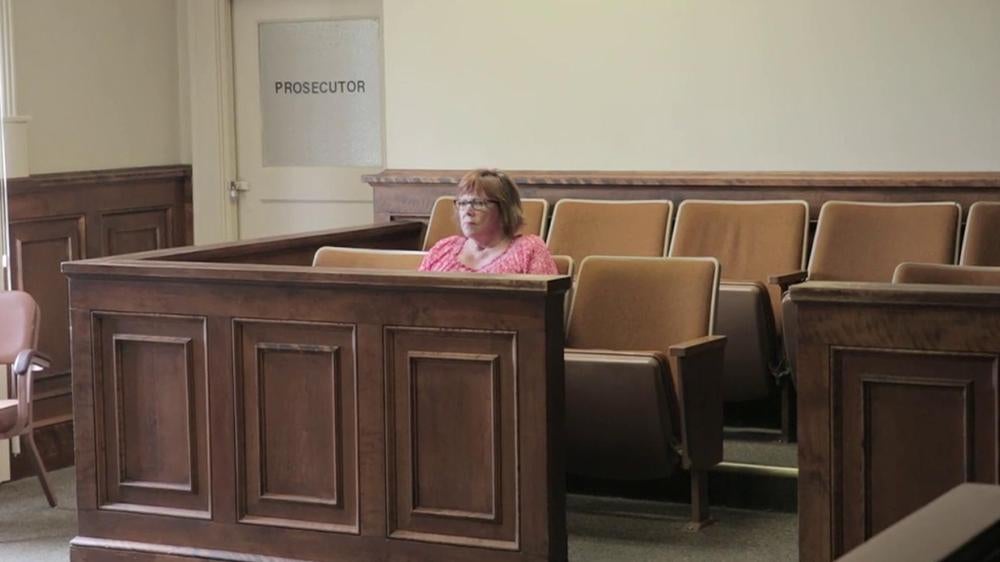 The documentary Lindy Lou, Juror Number 2 follows Lindy as she grapples with the guilt of sentencing a man to death, and her quest to unearth the impact of the trial on her fellow jurors. &#13;

Buy tickets to the screening

Why did you feel death was the only option?

In Mississippi at that time, there was no life without parole. And I didn’t want him back out, so we had no choice.

What did you think of the trial itself?

Those lawyers did a roughshod job. It was like they didn’t care. They never objected to anything the prosecutor said. They never brought up his childhood or his background.

How did your life change after the trial?

I lost my temper really quick. Anxiety. I really didn’t know it was the trial that was causing it.  I knew I needed to talk to someone about what I’d been through, that I needed comfort, and I knew I wasn’t acting right, either. I was not my usual self. I avoided people. I avoided social situations. I’d even gone to doctors – I thought it was hormonal. They couldn’t find anything wrong. I wanted my life back, and I didn’t have it. Nothing was the same.

In the film, you say that your changing views on the death penalty cost you people in your life. How did that happen?

Some people really did just stop being my friend, although most of them now talk to me. But that’s never a topic of conversation. Even me doing this film, it’s not discussed. I don’t bring it up with anyone around here, just close friends.

I talked mostly to my husband about the trial. My sister, who I’m really close to, is one of those eye-for-an-eye people. I talked to my pastor, and he didn’t help. He just showed me the “eye for an eye” passage in the Bible. And I said, “I can’t accept that.” I really had nowhere to turn.

You met Bobby after the trial. What was that like?

About the time Bobby was to be executed, I told his lawyers that I wanted to meet him. I said I need to ask for his forgiveness, and I want to do it face-to-face.

I went to visit him on July 6, 2006. I was the only visitor that he’d had in 15 years. And I was scared to death. But Bobby put me at ease. He asked me about my trip to Parchman [the Mississippi state penitentiary]. We got to talking, he asked me about my family, how many kids I had. He wasn’t at all what I expected.

I left at 4:30, and they were going to execute him at 6 that evening. I was with my mom and sister at a Mexican place in my hometown, having a margarita, when Bobby’s attorney called me and said there had been a stay of execution. I thought, ‘God has given me more time to befriend this guy.’

I visited him on the third Tuesday in August and September. He asked if he could call, and he’d call 2-3 times a week, and we talked for five minutes. He said he loved me. He knew I was married. I’d say I love you too, but I felt like I was lying. My love was not a romantic love, it was the love of a friend or for people. I just didn’t have the heart to tell him.

Why did you do that?

I thought, why does it matter? He’s going to die, and I didn’t want him to die thinking nobody cared about him because his mother and no one visited him.

But when he was executed in October, the commissioner of prisoners said on national TV that Bobby and I were having a love affair. That was absolutely not true. When I went to see him I was 55 years old. Bobby was 42. I was married. My mother heard, and called me freaking out. But the damage was done. People I knew asked why I was going up there and seeing him.

I gave people around here something to talk about for quite a while.

Florent [the filmmaker] portrayed me the way I am, and the way I think. He gave me a voice. People don’t think about the jurors. We see all these pictures of dead bodies and other evidence, and people expect us to just go home and resume our lives?

Are you glad you did it?

What really made me glad I did this was that I found out I’m not by myself. There were still some jurors who felt he deserved what he got, but I just don’t think we’re in the judgment business. But other jurors were suffering inside like I was. Seeing that made me realize there’s nothing wrong with me. What I’m feeling is a normal reaction to a terrible situation. And four of those jurors said they would never serve on a death penalty case again.

In watching the film, I noticed you were very good at talking to jurors who held different views on Bobby’s sentencing than you did. What was that like for you?

I can’t sit and judge. Florent and I are just opposites on everything, and he’s one of my best friends. He’s a progressive. I’m a conservative. When it comes to faith, he’s not a believer, I am. And he is one of the most gentle, sweetest, kindest, thoughtful persons I’ve ever met. And he feels about me the same way I feel about him. It makes life interesting.

I think that’s what’s wrong with the world today. People just can’t sit down and get past their own feelings or thoughts. We don’t even take the time to listen to people. We don’t have to agree on everything, nobody is alike. But why would that upset people?

It’s like the political stuff today. This to me was absolutely crazy. I think everybody just wants to overreact. Why have so much drama in your life? Life’s just too short. I just don’t have time for it.

Did you find any closure in making this film?

I did. Florent helped me put things into perspective. I had all this angst and I couldn’t talk about it with anybody. My brain was on a carousel.

The first time Florent was here, I didn’t say I was against the death penalty. Because when people would ask me, “What if something happened to one of your granddaughters?” I’d say that I’d probably kill the person who did it myself. Florent told me he’d feel the same way if something happened to his kid. But then he said, that’s not justice. You’re looking for revenge, not for justice.

I couldn’t have those conversations in my life before.

The film ends shortly after another juror’s daughter says she could never sentence anyone to death. What did that mean to you?

It was enlightening. It just lifted my spirits. It dawned on me that’s what I wanted to do. I had started talking with my granddaughter about the death penalty. The younger people that are here in this state, I don’t want them to grow up with that mentality that this is the answer. I want them to think about each individual circumstance. If they’re ever put in that position to sentence someone to death, I want them to think about it, and not just assume that because someone killed someone, they deserve the death penalty.

And if they’re going to continue the death penalty – I don’t see it to be done away with – there needs to be some changes. There’s no way you can take the average person off the street, put them on a death penalty case, and expect them to decide if the lawyers had proven the case beyond a reasonable doubt. They need insight into the judicial system.

Also, they should have a counselor who could offer assistance if a juror needs it. You can’t kill someone and then go home and wash dishes. It changes you from the inside out.

Tickets for the film, part of Human Rights Watch’s International Film Festival in New York, are on sale now at bit.ly/HRWlindylou. The movie will screen the evenings of Friday June 16 and June 17.