Donate Now
(Kampala) – The Ugandan government should facilitate independent and transparent investigations with international expertise into the November 2016 killings of civilians in Kasese, Uganda and hold security forces accountable, a coalition of 40 organizations said today. The groups urged the government to invite relevant African Commission experts and United Nations special rapporteurs to participate in investigations.

Six months after the joint police-military operations in Kasese, western Uganda that led to many deaths, there have been no investigations into the security forces’ operations. While no military or police have been charged for their conduct during the violence on November 26 and 27, 2016, at least 180 civilians, including at least six children currently on remand, face charges of murder, treason, and terrorism, among other crimes.

“The Ugandan government took significant steps to charge almost 200 civilians for their alleged involvement in the violence in Kasese,” said Maria Burnett, East Africa Director at Human Rights Watch. “But six months after this unexplained and overwhelming use of lethal force by the police and military, the government has taken no steps at all to investigate their role or to provide justice for the many victims.” 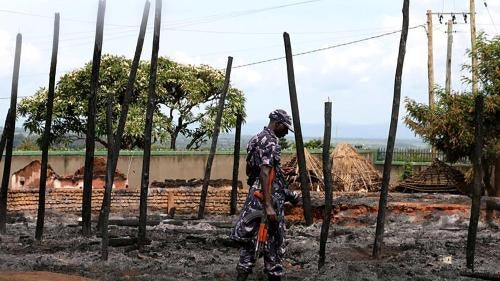 The death toll remains unclear. On March 16, 2017, the government increased its previous figures and stated that the death toll was 103, but didn’t specify over what time period. Human Rights Watch research throughout the sub counties of the Kasese district indicate that at least 55 people, including 14 police officers, were killed on November 26, and that more than 100 people were killed by police and the military during the attack on the palace compound of the region’s cultural institution on November 27. Human Rights Watch spoke to families of 15 children who were there and are presumed dead. The government has refused to investigate specific allegations that the military assault on November 27 killed children inside the palace compound.

“We are suffering, absolutely suffering,” a woman whose husband and son were inside said. “My children ask every day about their father and their young brother. Sometimes we just sit down with the family and mourn and cry.”

The African Commission on Human and Peoples’ Rights, the African Committee of Experts on the Rights and Welfare of the Child, and the United Nations Special Rapporteurs on Extra-judicial, Summary or Arbitrary Executions should request an invitation to Uganda to examine violence in the Kasese region, the groups said.

“At a time when the public trust in many inconclusive investigations into several murders in Uganda continues to wane, the government ought to accept international cooperation and support to restore trust in its commitment to investigate and act on these atrocities,” said Arthur Larok, Country Director of ActionAid Uganda.

At the time of the killings, there were multiple calls for investigations into the security forces’ conduct by local and international entities. Among those calling for an investigation were the Buganda kingdom, another Ugandan cultural institution that had its own political tensions with the central government that led to police and military killing at least 48 civilians in September 2009. In a Christmas message, the kingdom urged the government to “do everything in its power to investigate and punish all those involved in the mass killings.”

The Uganda Law Society, and Human Rights Network (HURINET) called for a commission of inquiry involving both parties involved in the clashes in November. Foundation for Human Rights Initiative (FHRI), Human Rights Watch, individuals and organizations of Uganda’s women’s movement, and many other groups have urged accountability for the killings over the past six months.

“These calls for justice will not go away without a commitment to transparency by the Ugandan government,” said Livingstone Ssewanyana, Executive Director of FHRI. “We remain deeply concerned that the November violence is yet another example of an unnecessary use of lethal force by Uganda security forces that violates UN standards.”

On March 16, the European Union and member states with embassies in Uganda issued a statement calling on the “competent authorities to immediately conduct the necessary field investigations, ensuring strong witness protection and protection of evidence.” The EU also offered to support those efforts. A December 16 statement by the EU heads of mission had urged the government to investigate the Kasese killings in a “timely, inclusive and transparent manner, according to due process and the rule of law,” and to make the findings public.

The United States, a significant contributor to Uganda’s military, also issued a statement on March 15, stating that it was “deeply troubled by the reported disproportionate use of force by security officials on November 27.” The US further urged the government to “conduct or permit a fair and independent investigation into this incident.”

“Victims in Kasese deserve answers about what happened in November and why,” said Nicholas Opiyo, Executive Director of Chapter Four Uganda. “The hallmark of a professional military is a willingness to scrutinize the conduct of its soldiers, and Uganda should not seek to avoid that responsibility.”

Government spokespeople told the media, and issued a statement on March 15, stating that Uganda “does not lack independent investigative capability.” But it has deflected calls for an independent investigation, saying that the matter was before court and therefore sub-judice, or pending litigation. Given there are no court cases involving crimes allegedly committed by soldiers or police pending, any sub-judice claim is not relevant and should not be used to obstruct such investigations, the groups said.

“The world is watching how the government of Uganda responds to the Kasese killings,” said Kerry Kennedy, President of Robert F. Kennedy Human Rights. “Nothing less than a comprehensive, credible, and independent investigation is acceptable – particularly into the role played by security forces in the deaths of over one hundred Ugandans.”