(New York) – The Human Rights Watch Film Festival will be presented June 9-18, 2017 with 21 topical and provocative feature documentaries and panel discussions that showcase courageous resilience in challenging times. In an era of global advances by far-right forces into the political mainstream, assaults on the free press, and the rise of “citizen journalism,” festival organizers hope that the films in this year’s program can serve as inspiration and motivation for the audience, from seasoned activists to those searching for a role in local and global movements.

Now in its 28th edition, the Human Rights Watch Film Festival is co-presented by the Film Society of Lincoln Center and IFC Center. All screenings will be followed by in-depth discussions with filmmakers, film subjects, Human Rights Watch researchers, and special guests.

“In these trying times for human rights, this year’s festival lineup champions activism—from people demanding accountability and major reform in the US police and justice institutions, to Chinese workers battling an electronics giant’s unsafe working conditions, to Mayan women at the forefront of political accountability and change in Guatemala, to the remarkable work of digital activists in Brazil and Tibet,” said John Biaggi, the festival’s creative director. “The festival highlights the outstanding work of activists at home and around the world, presenting a broad array of urgent human rights issues beyond those that command today’s headlines.” 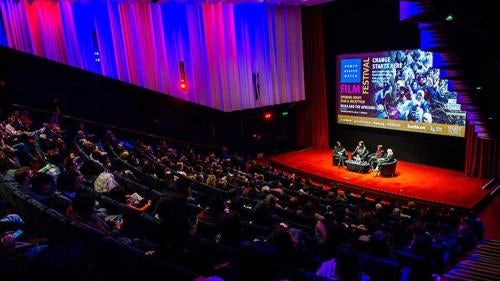 Three films address the urgent and evolving issues of the refugee crisis and migration affecting millions of people around the world. The winner of the festival’s 2017 Nestor Almendros Award for courage in filmmaking and the Opening Night film, Zaradasht Ahmed’s Nowhere to Hide, follows an Iraqi nurse and his family whose lives are suddenly turned upside down as war once again tears apart their country. Lost in Lebanon, by British sisters Sophia and Georgia Scott, takes a close look at the reaction of a country of 4 million inhabitants to the arrival of a million refugees. Tonislav Hristov’s The Good Postman follows a postman’s mayoral run on a platform of welcoming Syrian families into his tiny Bulgarian town.

The pressing need for systemic change in US police and justice institutions is another focus of this year’s selections. Erik Ljung’s The Blood Is at the Doorstep follows Dontre Hamilton’s family’s demand for justice following his fatal shooting by police in Milwaukee, Wisconsin. Peter Nicks’ The Force, based on unprecedented access to the Oakland Police Department, exposes layers of corruption and problems resulting from inadequate officer training. The grave mishandling of domestic violence cases, causing a grief-stricken mother to take up the fight for legal change, is profiled in April Hayes’ and Katia Maguire’s Home Truth. In Lindy Lou, Juror Number 2, by the French filmmaker Florent Vassault, a juror crosses political and religious divides in the Deep South to explore the personal impact on fellow jurors of sentencing a man to death.

Holding governments and powerful forces to account is as important as ever, both at home and abroad. Matthew Heineman’s Sundance standout City of Ghosts follows a team of Syrian “citizen journalists” risking their lives to expose atrocities in the ISIS-occupied town of Raqqa. Global digital activists from North America to Brazil and Tibet covertly counter governments’ expanding invasions of privacy in Nicholas de Pencier’s Black Code. In the special event discussion panel, From Audience to Activist, filmmakers, journalists, and activists will discuss the power of citizen-produced media and security challenges faced by those bringing truth to light. The festival’s Closing Night selection, Brian Knappenberger’s Nobody Speak: Trials of the Free Press, unpacks the Hulk Hogan vs. Gawker case and the sale of a Las Vegas newspaper to expose the threat to independent journalism from billionaires with a political agenda.

The Resistance Saga, a film festival special event, is an epic trilogy of documentaries by Pamela Yates on the saga of the Mayan people of Guatemala, including When the Mountains Tremble (1984), Granito: How to Nail a Dictator (2001), and the latest installment, 500 Years: Life in Resistance (2017), which documents the first trial in the history of the Americas to prosecute the genocide of an indigenous people. This day-long gathering will include the screening of all three films followed by a discussion on long-term movement building with the Mayan women protagonists, and a reception and concert by a Mayan singer, Sara Curruchich.

Ordinary citizens who take up causes of injustice are the subjects of two films from Asia. The Chinese-Canadian filmmaker Tiffany Hsiung’s The Apology profiles three elderly “comfort women”—from Korea, China and the Philippines—who continue to demand accountability for their sexual exploitation by the Japanese army during World War II. Heather White’s and Lynn Zhang’s Complicit follows factory workers harmed by exposure to chemicals in their work as they fight the Chinese electronics giant Foxconn, manufacturer for such brands as Apple and Samsung.

Five more outstanding documentaries round out this year’s screening program. Rina Castelnuovo-Hollander’s and Tamir Elterman’s Muhi - Generally Temporary follows a Palestinian toddler suffering from a life-threatening illness and his doting grandfather, who have been stuck in limbo in an Israeli hospital for years. In The Grown-Ups, the Chilean filmmaker Maite Alberdi paints a warm portrait of a group of middle-aged adults with Down syndrome who have attended the same school for 40 years, and now long for a more independent future. Adam Sobel’s The Workers Cup takes viewers inside the controversial labor camps of Qatar, where migrant workers building the facilities for the 2022 World Cup compete in a soccer tournament of their own. Cristina Herrera Bórquez’s No Dress Code Required follows a same-sex couple, Víctor and Fernando, as they fight for the right to be married in their hometown of Mexicali, Mexico. In David Alvarado’s and Jason Sussberg’s Bill Nye: Science Guy, the famed television personality takes on climate change deniers and creationists as part of his mission to advocate for science.

The festival continues its partnership with MUBI, an online cinema community that will feature select films from the film festival online while the New York festival is in progress. Learn more at mubi.com.