(New York) – The Afghan government is failing to protect tens of thousands of children, some as young as 5, from hazardous conditions in the workplace, in violation of Afghanistan’s labor laws.

The 31-page report, “‘They Bear All the Pain’: Hazardous Child Labor in Afghanistan,” documents how child workers work dangerous jobs in Afghanistan’s carpet industry; as bonded labor in brick kilns; and as metal workers. They perform tasks that could result in illness, injury, or even death due to hazardous working conditions and poor enforcement of safety and health standards. Many children who work under those conditions combine the burdens of a job with school, or forego education altogether. Working compels many children in Afghanistan to leave school prematurely. Only half of children involved in child labor attend school.

“Thousands of Afghan children risk their health and safety every day to put food on the family table,” said Phelim Kine, deputy Asia director at Human Rights Watch. “The Afghan government needs to do a better job of protecting its children – and the country’s future – by enforcing the law prohibiting dangerous work for children.” 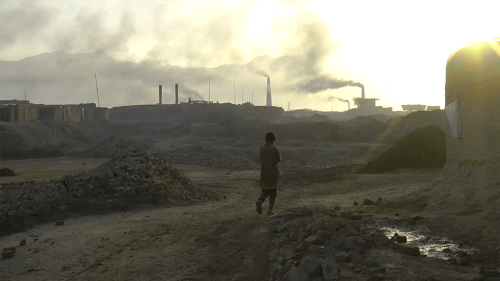 The government has failed to enforce prohibitions against child labor in hazardous industries, and has stalled in its effort to overhaul its labor law to bring it into line with international standards, Human Rights Watch said. Government institutions responsible for enforcing the law often lack the capacity to inspect workplaces, with the result that children working in prohibited jobs go unnoticed and unprotected.

In 2014, the Afghan government published a list of 19 hazardous occupations prohibited for children. These jobs include carpet weaving, metal work, and brick making. While a lack of resources is an important factor in the persistence of child labor in hazardous industries, the Afghan government has also failed to enforce its labor laws through penalties for violators and a strategy to end exploitative labor conditions.

A brick kiln manager in Kabul told Human Rights Watch: “There are children here, starting from 10 years or 8 years of age to 15 or 16… They wake up at 3 in the morning and work until about evening… They complain of pain, but what can they do? The kids are here to make a living. They bear all the pain to do all the work.”

“They Bear All the Pain”

Extreme poverty often drives Afghan children into hazardous labor. Afghanistan remains one of the poorest countries in the world. Landlessness, illiteracy, high unemployment, and continuing armed conflict in much of the country are among the most important factors contributing to chronic poverty and, as a result, child labor.

A 13-year-old metal worker in Kabul said, “My fingers have been cut from the sharp edges of the metal and slammed by the hammer. My finger has also been caught in the trimming-beading machine. When your nail gets hit by a hammer or caught in the machine, it becomes black and eventually falls off.”

While work that is appropriate to a child’s age and under healthy and safe conditions can be beneficial to the child’s development and allow them to contribute to their family’s basic needs, work that interferes with a child’s education, or is likely to jeopardize their health or safety, is generally considered “child labor” and is prohibited under international law.

Although pilot projects extending community-based schools to reach vulnerable children have been promising, support for these schools is inadequate to the need. Eradicating child labor in Afghanistan is not feasible so long as extreme poverty continues, but the government and its donors can take steps to protect children from the risks associated with working in particularly dangerous or unhealthy conditions.

Those steps include increasing the number of labor inspectors to adequately cover the entire country; giving priority to monitoring hazardous sectors; and offering the Afghan government targeted technical assistance in devising and implementing policies, standards, and regulations against child labor. Both the government and its foreign donors should devote more resources to expanding educational support to all working children.

The government has a legal obligation under international law to take immediate action to eradicate hazardous child labor. Both Afghanistan and its foreign donors should take urgent steps to protect children from the risks associated with working in particularly dangerous or unhealthy conditions.

“When children are of legal age and work in safe conditions, they can help provide vital livelihood support for many Afghan families,” Kine said. “But the Afghan government has an obligation to enforce the laws that protect children in the workplace, and ensure that they neither have to sacrifice their education or safety as the price for supporting their families.”