(Jakarta) – Indonesia detains and neglects migrant and asylum-seeking children, Human Rights Watch said in a report released today. Each year, hundreds are detained in sordid conditions, without access to lawyers, and sometimes beaten. Others are left to fend for themselves, without any assistance with food or shelter.

The 86-page report, “Barely Surviving: Detention, Abuse, Neglect of Migrant Children in Indonesia,” details Indonesia’s poor treatment of migrant and asylum-seeking children. They arrive in Indonesia after fleeing persecution, violence, and poverty in Somalia, Afghanistan, Pakistan, Burma, and elsewhere. Indonesia detains hundreds of migrant and asylum-seeking children each year without giving them a way to challenge their detention. Indonesian law permits up to 10 years of immigration detention.

“Migrant and asylum-seeking children risk life and limb to flee their countries and reach Indonesia,” said Alice Farmer, children’s rights researcher at Human Rights Watch. “Yet the port in the storm Indonesia offers is squalid detention facilities, where children waste months or years without education or hope for the future.”

Unaccompanied migrant children – who travel without parents or other adults to protect them – fall into a legal void. With no government agency responsible for their guardianship, no one responds to their needs. Some children languish in detention, while others are left on the streets, without the legal or material assistance to which they are entitled by law. 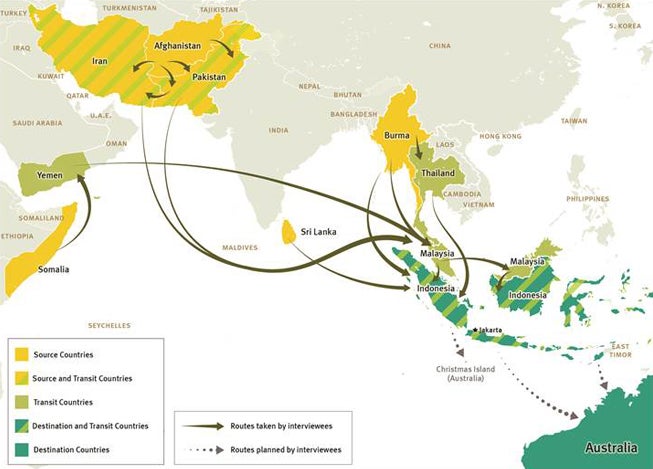 Without a viable future, many migrant children – either alone or with their families – risk their lives on dangerous boat journeys to Australia. They typically board rickety boats organized by smugglers without adequate fuel; hundreds are thought to die on this crossing each year.

Detention, Abuse, and Neglect of Migrant Children in Indonesia

Both adults and children described guards kicking, punching, and slapping them or other detainees. Some reported that guards tied up or gagged detainees, beat them with sticks, burned them with cigarettes, and administered electric shocks. In one case, parents said immigration guards forced their children, including their 4-year-old and 6-year-old, to watch guards beat other migrants. Several unaccompanied boys told Human Rights Watch that Indonesian immigration guards beat them in detention.

“That day I was beaten up very roughly,” a 15-year-old boy who had tried to escape from detention told Human Rights Watch. “There were eight or nine people beating me; most were guards and there was one person from the outside.”

Detention conditions fall far short of international standards: Centers are often overcrowded, unsanitary, and occasionally flooded. Children have next to no access to education and inadequate recreation time. Some children said they do not see sunlight for weeks at a time.

More than 1,000 unaccompanied children arrived in Indonesia in 2012. Many were detained with unrelated adults, at even greater risk of the violence and abuse that characterizes Indonesian immigration detention facilities.

Almost 2,000 asylum-seeking and refugee children were in Indonesia as of March 2013, a number that has gone up each of the last five years. Indonesia has no asylum law and delegates its responsibility to determine who must be protected as a refugee to the office of the United Nations High Commissioner for Refugees (UNHCR).

Yet even when UNHCR recognizes people as refugees, Indonesia often refuses to release them from detention, and does not recognize them as having any legal right to be in the country. Even if released, refugees and asylum seekers, including children, face constant threat of re-arrest and further detention.

Asylum seekers and refugees who are released cannot legally work or move freely around the country. Children have few prospects for gaining an education. Many wait months or years for UNHCR to process their cases. Only a small number are ultimately resettled to a third country.

“Migrant children in Indonesia are trapped in a prolonged waiting game with no certain outcome,” Farmer said. “Desperate children will keep coming to Indonesia, and the government should step up to give them decent care.”
For select accounts from the report, please see below.

Selected accounts from the report

“That day I was beaten up very roughly…. There were eight or nine people beating me, most were guards and there was one person from the outside. They hurt my shoulder, my ear, my back. I was beaten with one of the other people who was caught. It was in the courtyard – everyone was there, they were outside anyway. They saw and watched. Including one family from Iran, with a 7-year-old boy. He was watching too.” – 15-year-old Afghan boy mistreated by immigration guards after he tried to escape from an immigration detention facility in Balikpapan in East Kalimantan.

“For about five months I didn’t see the sun…. For the last two months we were allowed outside from 4 p.m. to 5 p.m. How can I explain what it’s like when we went out? We were like the wild, running all around. We were thinking we were alive again. In the yard there was water up to here [indicates waist] and we were running in it.” – 17-year-old Afghan boy detained at Pontianak Immigration Detention Center for seven-and-a-half months, after traveling to Indonesia alone without parents or guardians.

“Ten people escaped. Two were caught by the guards, and they brought them back. They beat them like animals. The blood came from their nose, their face, all parts of their bodies. They had called all the families to watch…. My children were very scared when they saw this happen in front of them.” – A refugee mother from Afghanistan describing an incident in which guards at Pekanbaru IDC, Sumatra, forced her three daughters, aged 10, 6, and 4 years old to watch as they beat detainees.

“There were 20 or 30 unaccompanied minors…. Boys had food stolen from them. Immigration didn’t listen; they laughed when we complained. Whenever the boys talked on the phone with their families, they would cry. The boys cried all the time. They were the most powerless in there. They would get attacked.” – An asylum-seeking Afghan man detained at Kalideres IDC near Jakarta and kept in an overcrowded room that included unaccompanied children who were in Indonesia without parents or guardians.

“I don’t have any money so I don’t have any way to help [my mother in Somalia]. This month I asked UNHCR to send me back to Somalia because I’d rather die with my mother. I told them, ‘If you won’t send me to another country, send me home.’ I do nothing all day. No classes, no job, it’s like my life is on embargo.” – 17-year-old refugee boy from Somalia who travelled to Indonesia alone and applied for refugee status with UNHCR, living in a migrant community outside Jakarta.