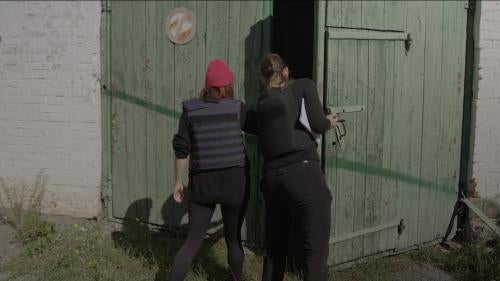 (Kyiv, October 19, 2022) – Russian forces and others operating under their command routinely tortured detainees during their six-month occupation of Izium, a city in the Kharkiv region of northeastern Ukraine, Human Rights Watch said today.

Survivors described being subjected to electric shock, waterboarding, severe beatings, threats at gunpoint, and being forced to hold stress positions for extended periods. They identified at least seven locations in the city, including two schools, where they said soldiers had detained and abused them.

We just spent three weeks in Izium in eastern Ukraine, which Ukrainian forces recaptured from Russian forces in early September after 6 months of occupation.

Russian forces and their subordinates routinely used torture to extract information from the people they detained.

This man, an electrician, was detained and tortured in a garage at a hospital that Russian forces turned into a military base and prison.

We went to this facility where he and 7 others we spoke to, were tortured.

We spoke to 8 more people who were also detained and tortured, in other locations.

They were severely beaten, electrocuted, water boarded, and held in painful stress positions.

The electrician was held multiple times in the “parrot position” where he was hanging from a metal bar.

Victims identified 7 locations in total in which they believe Russian forces held and tortured them while blindfolded.

Izium’s residents desperately need support and services, and those responsible need to be held to account for these war crimes.