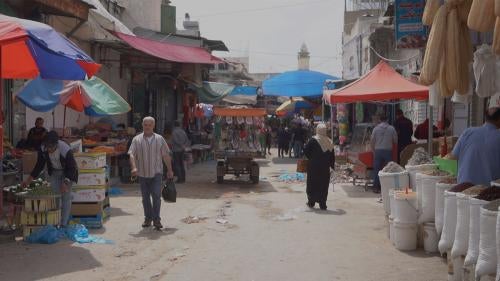 Israel’s sweeping restrictions on leaving Gaza deprive its more than two million residents of opportunities to better their lives, Human Rights Watch said today on the fifteenth anniversary of the 2007 closure. The closure has devastated the economy in Gaza, contributed to fragmentation of the Palestinian people, and forms part of Israeli authorities’ crimes against humanity of apartheid and persecution against millions of Palestinians.

Israel’s closure policy blocks most Gaza residents from going to the West Bank, preventing professionals, artists, athletes, students, and others from pursuing opportunities within Palestine and from traveling abroad via Israel, restricting their rights to work and an education. Restrictive Egyptian policies at its Rafah crossing with Gaza, including unnecessary delays and mistreatment of travelers, have exacerbated the closure’s harm to human rights.

I feel the horizon in Gaza is bleak and closed. The people of Gaza have no independence in the future, their ambitions, their ideas or even their dreams.

My hope was to become a professional in my homeland, my country, Palestine. But, as always, the travel restrictions imposed on Gaza players destroy all our dreams.

The right to free movement and to travel are human rights. And therefore, every human being should be able to enjoy this right.

For 15 years, Palestinians in Gaza have been trapped in what is effectively an open-air prison.

Israel bars the vast majority of Gaza residents from leaving through Erez, the only passenger crossing to the West Bank via Israel.

Palestinians should have freedom of movement, especially between Gaza and the West Bank.

Football is what inspires me. It’s been my hobby since childhood, and my only job. I only feel free when I am on the football field. When I play football, I forget about all of the pressures inside me.

Of course every player in Gaza wishes to travel and become a professional player because football in the Gaza Strip is considered amateur and not professional.

Most of the Gaza players want to become professional, either in the West Bank, Egypt, Jordan or any other country. I had the opportunity in 2019 to play professionally with Balata Center Club in the West Bank, in Nablus. I submitted two travel permits through the Palestinian Football Federation. The [Israeli authorities] received the application but did not review it.

It was ready on the Palestinian side. I was offered another professional opportunity from Hilal Al-Quds Club in Jerusalem. They submitted a travel permit on my behalf. It was rejected. It was a really important opportunity for me to become a professional and grow, I could have joined the national team. It’s typical of the travel restrictions imposed on us here in Gaza.

Regarding the future of the Palestinian cause, how can we find a solution that is...

I work as a program coordinator at the Zimam Palestine Foundation in the Gaza Strip. The vast majority of our work in the institution is with young people. We educate young people on the Palestinian cause.

The main office for Zimam Foundation, where I work, is in Ramallah. It [was] important that I meet in person with my colleagues in the West Bank, in order to facilitate our work as employees in the same organization.  But unfortunately, I was surprised by the Israeli security ban.

I’ve tried more than once to go to the West Bank but unfortunately... I’ve tried four times, but every time they deny me on the grounds of ‘nonconformity’. So I couldn’t leave.

Being a female filmmaker in Gaza is difficult. It takes twice the effort that it takes for men in the same field. In order to develop your skills as a filmmaker in Gaza, you have to travel, to leave. There is no film institute or college [in Gaza].

There’s no airport in Gaza to travel direct so there are many things to consider when thinking of travel.

Due to Israel’s restrictions, Egypt’s Rafah Crossing has become Gaza residents’ primary outlet to the outside world.

But Egypt’s restrictive policies, in addition to delays and mistreatment by border officials, contribute to the closure of Gaza.

I had a workshop in Tunisia, an artistic residency for scriptwriting. The Rafah Crossing remained an option. My name was far down the list [of people allowed to travel]. I tried to move it up to be sooner. Early one morning, I finally received a notice by text message.

[I would only be allowed to travel] three weeks after the opportunity [had passed]. I’m unable to find a solution for these obstacles. They exist. They’re always there. So now I work for a community organization [instead].

The sweeping and arbitrary closure is one component of the Israeli authorities’ crimes against humanity of apartheid and persecution against millions of Palestinians.

The word ‘future’ brings about feelings of fear for any young person living in Gaza.

My destination changed. Today I am not able to reach the West Bank.  Today I have a dream that I want to realize. My dream is to become professional player.

I think we have to keep imagining what life would be like without the occupation, the blockade, and the restrictions. It's the one breath of hope that allows you to keep living on this land and holding on to any bit of hope in life.

Israel should end the generalized ban on travel to and from Gaza, and allow freedom of movement subject to, at most, individual screenings for security purposes.

Egypt should end its restrictive policies, including delays and mistreatment of travelers, that magnify the effects of Israel’s closure policy.