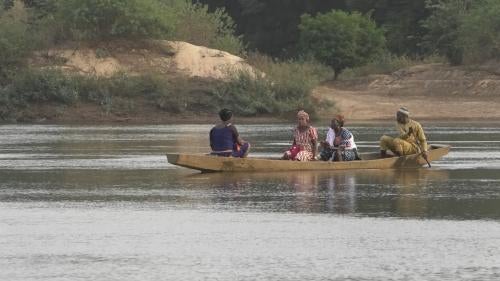 (Nairobi, April 16, 2020) – The Guinean government’s failure to provide adequate land, compensation, and other forms of support to those displaced for the Souapiti hydroelectric dam has devastated the livelihoods and food security of thousands of people, Human Rights Watch said in a report released today. The dam is part of the Belt and Road Initiative (BRI), the Chinese government’s trillion-dollar investment in infrastructure across some 70 countries, which has supported large-scale hydropower projects in Africa, Asia, and Latin America.

The 63-page report, “‘We’re Leaving Everything Behind’: The Impact of Guinea’s Souapiti Dam on Displaced Communities[MH1] ,” documents how resettled communities, forced off their ancestral homes and farmlands, are struggling to feed their families, restore their livelihoods, and live with dignity.

The government of Guinea is constructing a massive dam on the Konkouré river to produce electricity.

The dam is part of the Belt and Road Initiative, China’s trillion dollar investment in infrastructure worldwide.

The Souapiti Hydro Electric dam will flood a vast zone home to dozens of villages, all of which must be relocated. And thousands of hectors of farmland will also be destroyed.

We spoke to residents of Konkouré before they were relocated.

I was born here. It was my ancestors who founded this village. We’re going to leave a lot of things behind, like our plantations. We leave it for the development of Guinea.

If we had the choice, we wouldn’t leave. But since the government tells us we will be relocated, we have to do it. Otherwise, we’d have liked to be buried on our land, next to our parents.

By October 2019, flood waters had reached Konkouré and the village was relocated.

Communities are resettled in new homes surrounding the dam’s reservoir.

But many people have lost the farmland and grazing fields they relied on for food.

We were brought here but they didn’t show us where to farm. So how will we farm? We can’t farm. How can the government help us?

The government has promised to help farmers adapt and find new income sources but so far communities have seen little support.

The government of Guinea is happy to talk up the benefits that Souapiti’s electricity will bring, but the government can and should do more to ensure that the project does not harm the communities most affected by it.