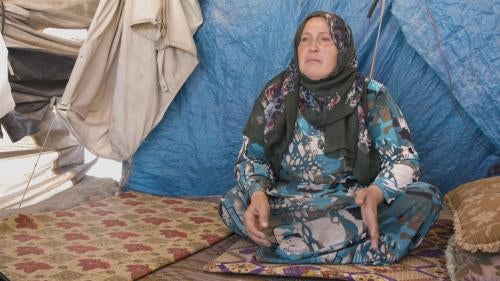 The authorities in Syria should address as a priority what happened to people who disappeared in the custody of the Islamic State (also known as ISIS) while the group controlled parts of Syria, Human Rights Watch said in a report released today. Authorities in de facto control of areas formerly under ISIS control should make information-sharing with families a priority and help create a formal system to address the issue of the missing and allow families to register their cases.

Um Ayman, son kidnapped by ISIS: Not a day goes by that I don’t think of him and cry. He left a big void in my heart, he is my eldest.

Thousands of people who vanished under ISIS rule remain missing and the opportunity to learn their fates is slipping away.

Um Ayman, son kidnapped by ISIS: This is his photo, five days before. This picture was taken, then he was gone. They kidnapped them.

The Islamic State’s expansion in Iraq and Syria was characterized by horrendous abuses. Largely unseen were the widespread detentions and kidnappings ISIS used to fund their operations and sow fear.

Former ISIS prisoner, neighbor kidnapped by ISIS: We found out that he was taken by ISIS. But we didn’t know where. Some people said they took him to Tabqa, others said al-Bab.

In March of last year, the anti-ISIS coalition finally announced the territorial defeat of the self-styled caliphate. Yet thousands kidnapped by ISIS are still missing today.

Whether in areas now controlled by the Syrian government, the international coalition to defeat ISIS, the Kurdish-led authorities, or Turkey and Turkish-backed factions, there are still people missing.

Among the missing are aid workers, political activists, journalists and residents of areas ISIS occupied including women and children.

Um Ayman, son kidnapped by ISIS: Four years of sadness. I cry all the time, I am very sad about him. There is no information or anything. I don’t know if he is alive or dead. This is what kills me.

Families told Human Rights Watch that they had hoped the defeat of ISIS would quickly lead to information about their loved ones. But the various acting authorities in the region have largely failed to make this crisis a priority.

Shaaban Mustafa, son kidnapped by ISIS: We’re asking all the authorities here, Intelligence, Asayish security service, the Syrian Democratic Forces, that they let us know the fate of the people they freed from ISIS prisons. Even now, they say they know nothing.

Imam Muhammad Imam, son kidnapped by ISIS: We even went to Aleppo when it came under the control of the Syrian government, we didn’t find anything. We sent people to look through records of detainees, but we could not find a thing.

Authorities in de facto control should urgently create a civilian body with a mandate to collect information about the missing under ISIS. It should make outreach to families a priority. Whether they are among the hundreds executed by ISIS and placed in mass graves, or in the prisons levelled by Coalition airstrikes, whether they are no longer with us, or managed to survive, their families deserve answers.