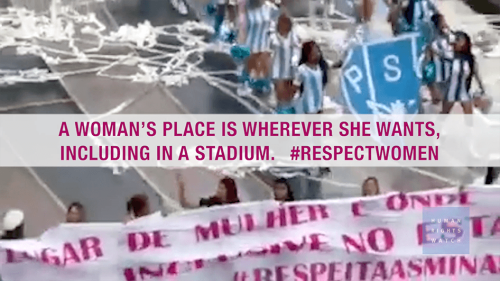 A video was shot in February 2017 at Mangueirão stadium in the northern state of Pará, where arch-rivals Remo and Paysandu were about to face off. Shortly before kick-off, female supporters of both teams are seen walking around the playing field calling for respect for women fans. Their banner reads: “A woman’s place is wherever she wants, including a stadium,” with the hashtag #repeiteasminas (“respect women”). Taking advantage of the anonymity of the crowd, the Remo fans first booed them and then chanted demeaning lyrics about kissing and having sex with Paysandu women.