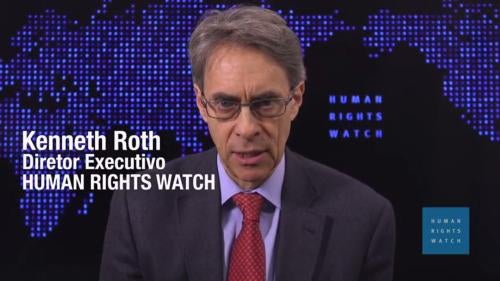 (Washington, DC, January 12, 2017) – The rise of populist leaders in the United States and Europe poses a dangerous threat to basic rights protections while encouraging abuse by autocrats around the world, Human Rights Watch Executive Director Kenneth Roth said today in launching the World Report 2017. Donald Trump’s election as US president after a campaign fomenting hatred and intolerance, and the rising influence of political parties in Western Europe that reject universal rights, have put the postwar human rights system at risk.

The rise of populism poses a dangerous threat to human rights. Trump gained power in the United States, various politicians are seeking power in Europe, through making appeals to racism, xenophobia, nativism, and misogyny. They all have in common the claim to speak for the majority, and to claim that majority wants rights violated in the name of securing jobs or avoiding cultural change, or protecting against terrorism.

We've seen this show before. In the last century, various communist and fascist governments also claimed to speak for the majority, and then visited enormous repression on their people. Even today, people like President Erdogan in Turkey, or President Sisi in Egypt at first had great popularity, when Erdogan went against the alleged plotters of the coup, or Sisi went against the Muslim Brotherhood. But each took that willingness to violate human rights to great extremes as they suppressed any peaceful protest against their rule.

There is this tendency today to think that the strongman delivers best, but if you look at people like Vladimir Putin in Russia, or Xi Jinping in China, they increasingly have resorted to repression as their economies have slowed or declined, without delivering against corruption, pollution, or arbitrary rule. Many politicians today are responding to this rise of populism by simply putting their head in the sand, hoping that the winds of change will blow over. Others are actually emulating the populists, hoping somehow to preempt them, when in fact they're just reinforcing their message.

Above all, the public needs to reaffirm the basic value that we should treat others the way we want them to treat us. That's the best way to ensure that we all don't end up on the wrong end of the stick when a government abandons its commitment to human rights.