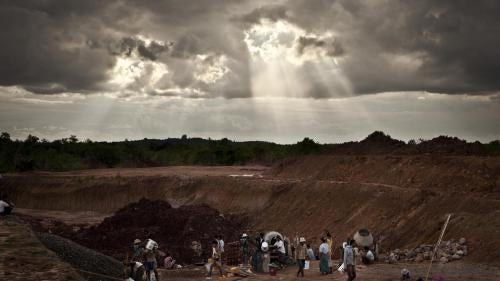 Phil Robertson
Deputy Asia Director
HUMAN RIGHTS WATCH
In Burma, 70 percent of the people make their living through farming, so land is the key to their livelihoods.

U Se Thein
Farmer
It’s been many years. My grandparents passed away a long time ago. I have been work here on this land for almost 30 years.

U Ne Win
Farmer
They tricked us into signing the paper saying we agreed to move from our lands for their industrial zones and said if we continued working, they would charge us with trespassing on the land.

“Saw Tin Aye”
Lawyer
The government usually surveys the land, draws a new map, and confiscates the land for development projects. They don’t use the land themselves. They sell to cronies. They bully the farmers.

Phil Robertson
Deputy Asia Director
HUMAN RIGHTS WATCH
In some cases, police or border guard official are using threats or force to take people’s land and drive them out of their homes. Farmers who continue to work the land will certainly face trespassing charges. Farmers who organize protests and participate in protests will face arrests and lengthy court battles. Land grabs like this are happening in much of the country. The government says that they promoting development and that villagers don’t have a legal right to the land. As Burma open up to economic opportunity and investment, the government needs to make sure that development projects benefit everyone, and that farmers are not left without land and livelihoods.