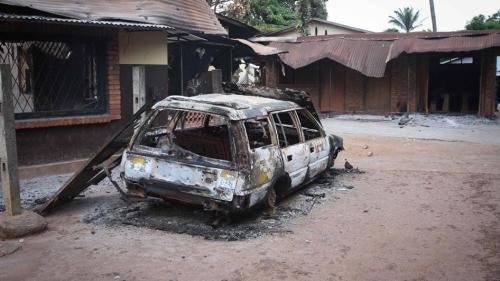 Five days of sectarian violence that gripped Bangui, the capital of the Central African Republic, between September 25 and October 1, 2015, led to at least 31 targeted killings of civilians.

Based on interviews in Bangui, between October 7 and 13, with witnesses, Human Rights Watch found that at least 31 civilians, possibly many more, were shot at point-blank range or stabbed to death, or their throats were slit. The vast majority of killings were by armed members of Muslim self-defense groups, although armed members of the mostly Christian and animist anti-balaka group also incited and participated in the violence, at times fighting with the Muslim groups. Some of the victims were burned in their homes or in places where they sought shelter. The victims included nine women – one of them eight-months pregnant – and four elderly men. Human Rights Watch confirmed eight other cases in which the victims were armed men.