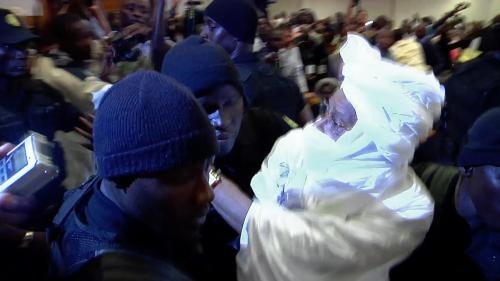 (Dakar, July 24, 2015) – Human Rights Watch today released a short [video], “Act 1 of the Hissène Habré trial”  with clips of the first two days of the trial of the former dictator of Chad, Hissène Habré, in Dakar, Senegal.

The video shows judicial officers taking Habré away for creating a disturbance on the first day of the trial, July 20, 2015.  On the second day of the trial, after Habre’s lawyers refused to participate in the hearing at their client’s request, the court then adjourned the trial until September 7 to give time for new court-appointed lawyers to prepare Habré’s defense.

“The victims of abuses under Habre’s rule are of course disappointed in the trial adjournment,” said Reed Brody, senior counsel at Human Rights Watch who has worked with the survivors since 1999.  “But they have been fighting to bring this case to court for 25 years, and 45 more days will not change anything in their long march toward justice.”