Donate Now
Thursday night, thugs invaded the offices of Memorial, a leading Russian rights group, and although police eventually arrived, instead of helping them, they harassed the activists and refused to let them leave the building until late in the night. Here’s what happened through the eyes of Memorial activist Yulia Orlova and her colleagues.

Yulia Orlova was still at work at 7:30 p.m. on October 14 when she heard loud shouts from down the hall: “On the floor! Drop to the floor!” Feeling anxious, she and her officemate cautiously checked what was happening. The noise was coming from a large conference room where a film about the catastrophic famine in early 1930’s Soviet Ukraine was screening. They saw two dozen thugs blocking the screen, chanting “shame!,” “fascists!,” and “get out of here!”

Memorial’s staff called the police, but by the time the officers arrived most of the intruders had dispersed, and police led away the three who remained. Several Memorial representatives went to the district police precinct to give testimony. 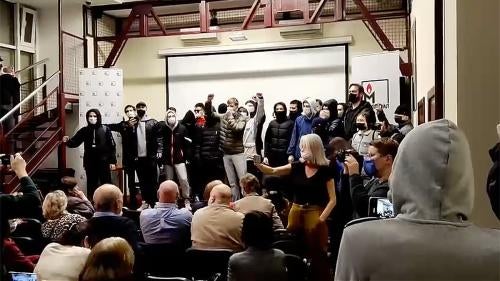 Then, without explanation, the police blocked the activists and anyone else in Memorial’s building from leaving. They held them there for hours, late into the night, forcing everyone to submit a written “explanation” before they could leave.

“At first, we did not understand we were being locked in. We actually continued with the screening after the thugs left.” Orlova said. “But then at around 9 p.m. I decided to call it a day. I went to the staff exit – and saw a police officer blocking the door. I told him I had a long commute ahead of me and I needed to leave – and he refused to let me out.” Uniformed and plainclothes police blocked the front entrance, she said. Supporters of Memorial who heard about the intruders had come, despite pouring rain, to offer support, but the police forced them to stay outside. “This went on for hours.”

Memorial activists kept trying to get the police officers to explain what was happening and why, but could not get a coherent response. Finally, police said that everyone would be allowed to leave only if they provided a written statement describing the event itself and the intrusion, and providing full passport details, residential address, phone number, as well as information about their education, workplace, and work title. “I said I won’t be doing any such thing without a lawyer present,” Orlova said. In fact, members of their legal team stood outside, but police had blocked them from entering.

More time went by. A plainclothes officer who was apparently in charge demanded to see all of Memorial’s office premises, including workstations. A Memorial activist overheard police talking among themselves, saying they planned to seize some equipment. Fearing that their offices would be arbitrarily searched and documents and electronic devices confiscated, Memorial’s team redoubled their demands to see their lawyers.

Meanwhile, the officers guarding the staff entrance apparently walked away, and, to ensure the door remained blocked, locked it with a pair of handcuffs from the outside. An image of the handcuffed door was widely shared on social media, contributing to public and media outcry.

Exasperated, one of Memorial’s legal team members gained entry to the building through an open window and confronted the police, who eventually allowed two lawyers into the building.

At 2 a.m. the police finally left, taking Memorial’s DVR with them, despite the fact that Memorial had earlier provided them with complete footage of the evening. When thanking Memorial supporters and independent media, the head of Memorial, Yan Rachinsky, said that without their support the story could have had a “different [worse] ending.” He also noted that while the thuggish attempt to disrupt the screening cost Memorial 20-30 minutes, the police interference did more damage, costing them close to “seven hours and a DVR,” not to mention the stress.

For years, the Russian government has smeared Memorial as a “foreign agent,” and repeatedly fined the group under this abusive legislation. And it’s not the first time pseudo-patriotic thugs have targeted Memorial, and each time, police do little, if anything, to stop them. And although police showed up last night, one has to wonder what message they were sending when they blocked everyone inside the building.

Memorial stands up for human rights and provides a platform for free debate and artistic expression. The image of police handcuffs locking the organization’s door is an indelible symbol of the vicious crackdown on fundamental freedoms by Russian authorities currently sweeping across the country. Maybe that was the message.

This article was originally published in The Moscow Times and can be found here.