On December 3, 2020, the Swiss Federal Criminal Court, in the city of Bellinzona, began the trial of Alieu Kosiah, a former commander of the United Liberation Movement of Liberia for Democracy armed group, known as ULIMO. He is the first Liberian to be put on trial for alleged war crimes committed during the first Liberian civil war, from 1989 to 1996.

The Question-and-Answer document provides details on Kosiah’s background, as well as key issues that emerged during the first part of his trial, from December 3-10, 2020. It also addresses the trial’s implications for domestic justice in Liberia and touches on overall efforts in Switzerland to investigate and prosecute serious crimes under international law.

“Kosiah’s trial presents an opportunity for victims of Liberia’s first civil war to finally see justice after so many years of suffering,” said Balkees Jarrah, associate international justice director at Human Rights Watch. “The Swiss court in Bellinzona should find ways to communicate vital information about the trial to affected communities in Liberia.”

Victims and witnesses who were previously unable to travel to Switzerland for the start of the trial in December will attend the hearings in person when the proceeding resumes. Kosiah’s trial was originally scheduled to begin in April 2020 but was repeatedly postponed because the Covid-19 pandemic made it impossible for victims and witnesses to travel from Liberia for the proceeding. The Swiss Federal Criminal Court said that efforts to arrange for their testimony via video link from Monrovia, Liberia’s capital, were unsuccessful.

Kosiah has been in custody since 2014. The authorities have a duty to ensure that anyone accused of crime is tried within a reasonable time. Prolonged detention without trial can undermine a defendant’s rights. To ensure confidence in the fairness of the process, the authorities should state publicly why Kosiah’s extended pretrial detention was necessary. 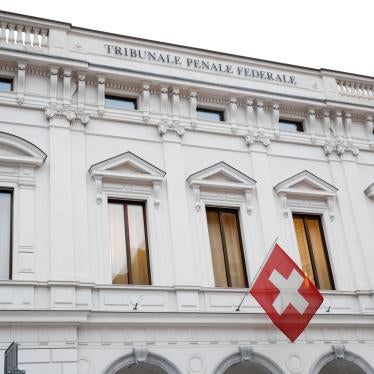 To avoid further delays, the court decided to divide Kosiah’s trial into two parts: one in December and the other in February. When the landmark trial formally opened, the court addressed preliminary procedural challenges and began hearing from the accused. In phase two, set to begin on February 15, the court will hear from the seven victims and nine witnesses. The various parties will also present their arguments in the case.

A key challenge Swiss judicial authorities face is ensuring that affected communities in Liberia whose members are unable to travel to Bellinzona have access to some information about the trial. The court should make every effort to fill this gap and make information about the trial available to the public and communities affected by ULIMO’s crimes, Human Rights Watch said. Inadequate outreach can undermine the impact of accountability efforts in relation to serious international crimes.

Kosiah was arrested on November 10, 2014, in Switzerland, where he had been living since 1999, for his alleged role in war crimes between 1993 and 1995 in Lofa County, northwest Liberia. Swiss prosecutors accuse him of various crimes, including ordering the murder and cruel treatment of civilians, rape, the recruitment of child soldiers, and pillage. Kosiah faces 25 separate charges.

Kosiah’s trial in Switzerland is possible because the country’s laws recognize universal jurisdiction over certain serious crimes under international law, allowing for the investigation and prosecution of these crimes no matter where they were committed and regardless of the nationality of the suspects or victims.

During Liberia’s armed conflicts from 1989-96 and 1999-2003, Liberians suffered widespread violations of international human rights and humanitarian law such as mass killings, rape and other forms of sexual violence, summary executions, mutilation and torture, and use of child combatants. Liberia has not prosecuted anyone for the grave crimes committed during its two armed conflicts.

“Kosiah’s trial should send a clear message to the Liberian authorities that the time for delay on justice for the country’s civil wars-era crimes should be over,” Jarrah said. “President George Weah should at last request UN assistance to create a war crimes court in Liberia so Liberians can see those accused of crimes during Liberia’s civil wars face justice closer to home.”