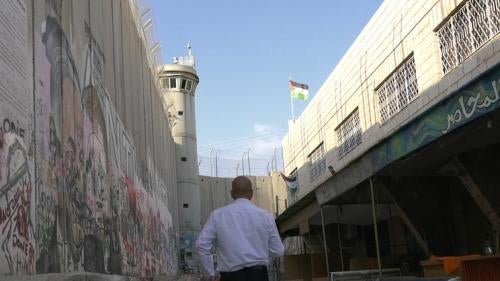 (Jerusalem) – Israel should grant Palestinians in the West Bank rights protections at least equal to those afforded Israeli citizens, Human Rights Watch said in a report released today, citing Israel’s 52 years of occupation with no end in sight. The law of occupation permits occupiers to restrict some civil rights in the early days of an occupation based on limited security justifications, but sweeping restrictions are unjustified and unlawful after five decades.

“Israel’s efforts to justify depriving Palestinians of basic civil rights protections for more than half a century based on the exigencies of its forever military occupation just don’t fly anymore,” said Sarah Leah Whitson, executive director of the Middle East and North Africa division at Human Rights Watch. “Given Israel’s long-term control over Palestinians, it should at minimum allow them to exercise the same rights it grants its own citizens, regardless of the political arrangement in place.”

Human Rights Watch conducted 29 interviews, primarily with former detainees and lawyers who represented them, reviewed military court indictments and decisions, and examined eight illustrative cases of activists, journalists, and other Palestinians detained under restrictive Israeli orders in the last five years. The report also reflects substantive responses to the findings from the Israeli army and police.

Other governments and international organizations concerned with the rights of Palestinians should endorse a civil rights framework to highlight the impact of Israel’s restrictive military orders in the West Bank and press Israel to grant Palestinians full civil and other rights at least equal to what it grants Israeli citizens, Human Rights Watch said. Those should supplement such protections under the law of occupation as the prohibition against building settlements, which remain in place so long as the occupation persists.

The international law governing military occupation requires Israel as the occupier to restore “public life” for the occupied Palestinian population. That obligation increases in a prolonged occupation such as Israel’s, as the International Committee of the Red Cross and Israeli Supreme Court have said and the Israeli government itself has acknowledged. The Palestinian population’s needs have increased over the decades while Israel has done far too little to develop more narrowly tailored responses to countering security threats that minimize rights restrictions.

Suspending rights for a short period may temporarily disrupt public life, but long-term, indefinite suspension cripples a community’s social, political, and intellectual life. The longer an occupation, the more military rule should resemble an ordinary governing system that respects the standards of international human rights law that apply at all times. In cases of indefinite occupation, such as Israel’s, the rights granted to an occupied population should be at least equal to the rights afforded the occupier’s citizens.

British Mandate-era regulations that remain in force in the West Bank and military orders that Israel has issued since it captured the West Bank in 1967 allow the Israeli army to strip Palestinians of basic civil rights protections. The regulations, for example, allow Israel to declare unlawful groups that advocate “bringing into hatred or contempt, or the exciting of disaffection against” local authorities and to arrest Palestinians for affiliation with such groups.

The military orders impose prison terms of up to 10 years on civilians convicted by military courts for influencing public opinion in a way that could “harm public peace or public order.” A 10-year sentence can also be imposed on Palestinians who participate in a gathering of more than 10 people without a military permit on any issue “that could be construed as political” or if they display “flags or political symbols” without army approval.

These sweeping restrictions apply only to the 2.5 million Palestinian residents of the West Bank, excluding East Jerusalem, but not to the more than 400,000 Israeli settlers in the same territory who fall under Israeli civil law. That law, which also applies in East Jerusalem – annexed by Israel, but still occupied territory under international law – and in Israel, much more robustly safeguards the rights to free expression and assembly.

“Nothing can justify today’s reality where in some places people on one side of the street enjoy civil rights, while those on the other side do not,” Whitson said.

According to data it provided to Human Rights Watch, the Israeli army between July 1, 2014 and June 30, 2019 prosecuted 4,590 Palestinians for entering a “closed military zone,” a designation it frequently attaches on the spot to protest sites, 1,704 for “membership and activity in an unlawful association,” and 358 for “incitement.”

In one example, the Israeli army detained Farid al-Atrash, 42, who works for the Independent Commission of Human Rights, a quasi-official body of the Palestinian Authority, for participating in a peaceful demonstration in Hebron in February 2016 that called for reopening a major downtown street to Palestinians. Military prosecutors cited provisions of military law that prohibit political gatherings, pointing to his “waving Palestinian Authority flags” and holding a sign that read “Open Shuhada Street.”

They also accused him of entering a “closed military zone,” and “assault of a solider,” but furnished no evidence of this offense. The authorities released him after five days, but continue to prosecute him more than three years later.

Israeli authorities also rely on military orders to ban 411 organizations, including all the major Palestinian political movements, and to detain people affiliated with them. Israel’s association-based claims against one banned organization, al-Hirak al-Shababi, appear to focus on its protests against the Palestinian Authority, based on a review of an indictment against Hafez Omar, an artist in Israeli detention since March 2019. Military law affords no appeal of such bans.

Prosecutors have cited the broad definition of incitement under Israeli military law to criminalize speech advocating resistance to the occupation, even when it does not call for violence. For example, they used the charge to justify detaining a 43-year-old activist, Nariman Tamimi, over a livestream she posted to Facebook of an encounter between her then-16-year-old daughter Ahed and Israeli soldiers in her front yard in December 2017.

“Israeli military law in place for 52 years bars Palestinians in the West Bank from such basic freedoms as waving flags, peacefully protesting the occupation, joining all major political movements, and publishing political material,” Whitson said. “These orders give the army carte blanche to prosecute anyone who organizes politically, speaks out, or even reports the news in ways that displease the army.”

“A person who organizes a procession, assembly or vigil without a permit, calls for or instigates their being held or encourages them or participates in them in any way … shall be liable for imprisonment for ten years or a fine of ten thousand liras, or both.” Military Order 101

“It is forbidden to hold, wave, display, or affix flags or political symbols, except in accordance with a permit from the military commander.” Military Order 101

“It is forbidden to print or publicize in the region any publication of notice, poster, photo, pamphlet or other document containing material having a political significance, unless a license is previously obtained from the military commander of the place in which it is intended to execute the printing or publication.” Military Order 101

“[T]he expression ‘unlawful associations’ means any body of persons … which by its constitution or propaganda or otherwise advocates, incites or encourages … the bringing into hatred or contempt of, or the exciting of disaffection against [local authorities].” Defense (Emergency) Regulations of 1945 (enforced by the Israeli army)

“A person who [a]ttempts, orally or otherwise, to influence public opinion in the Area in a manner which may harm public peace or public order, or … [c]arries out an action expressing identification with a hostile organization, with its actions or its objectives or sympathy for them, by flying a flag, displaying a symbol or slogan or playing an anthem or voicing a slogan, or any similar explicit action clearly expressing such identification or sympathy, and all in a public place or in a manner that persons in a public place are able to see or hear such expression of identification or sympathy – shall be sentenced to ten years imprisonment.” Military Order 1651