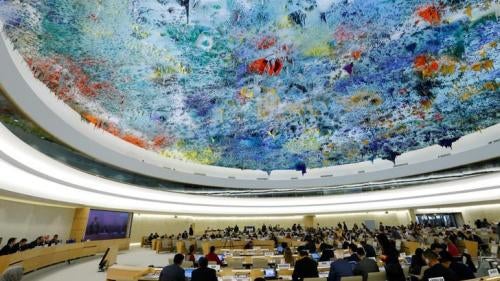 We express the greatest concern for the situation in Eastern Ghouta, Syria, as it continues to deteriorate significantly.

And we welcome this urgent debate. As UN Secretary General Guterres told the Human Rights Council at its opening session: “Eastern Ghouta cannot wait. It is high time to stop this hell on earth.” When civilians are dying in real time, the Council should respond in real time.

Since February 19, an offensive by the Syrian-Russian military alliance has resulted in the death of over 600 civilians. First responders have told Human Rights Watch that medical facilities and secondary medical points have also been attacked. In one instance on February 21, a bomb directly struck an ambulance arriving at the scene of a strike. Overall, at least 23 medical centers have been attacked since the offensive started, according to local medical workers.

Last Saturday, the UN Security Council, including Russia, passed a resolution calling for a cessation of hostilities, allowing humanitarian aid into the besieged enclave and urgent medical evacuations.

Since the passage of this UN Security Council resolution, there continue to be reports of attacks on civilians and civilian objects in the besieged enclave of Eastern Ghouta, and no humanitarian convoys have had access.

We urge the Human Rights Council to call on the Security Council and specifically Russia to ensure that the resolution’s requirement of humanitarian access and protection of civilians is implemented immediately and without fail.

We welcome the call in the draft resolution for accountability, but note that the text could be clearer on the path towards this goal. We therefore support the call for the Commission of Inquiry to immediately investigate the events in Eastern Ghouta, but urge that it also be requested to submit the results of its investigation to the UN General Assembly and UN Security Council, and that its evidence and findings be provided to the IIIM. Concrete steps to hold those responsible to account are needed to address the climate of complete impunity that lies at the heart of continuing atrocities.