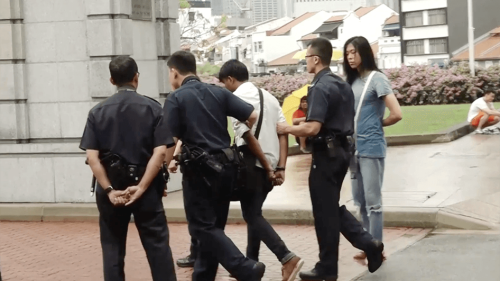 “Singapore promotes itself as a modern nation and a good place to do business, but people in a country that calls itself a democracy shouldn’t be afraid to criticize their government or speak out about political issues,” said Phil Robertson, deputy Asia director at Human Rights Watch. “Direct and indirect restrictions on speech and public protest have long stifled debate on matters of public interest in Singapore.”

Suppression of Free Expression and Assembly in Singapore

The 133-page report, “‘Kill the Chicken to Scare the Monkeys’: Suppression of Free Expression and Assembly in Singapore,” is based on an in-depth analysis of the laws and regulations used by the Singapore government to suppress speech and peaceful assembly, including the Public Order Act, the Sedition Act, the Broadcasting Act, various penal code provisions, and laws on criminal contempt. Drawing on interviews with 34 civil society activists, journalists, lawyers, academics, and opposition politicians; news reports; and public statements by government officials, the report examines how these provisions have been used to limit individual rights to speech and assembly.

Human Rights Watch wrote to the prime minister of Singapore, the home affairs and law minister, the minister for foreign affairs, and the minister for communication and information requesting their views on the issues raised in the report but no government official or agency replied.

Individuals who are critical of the government or the judiciary, or speak critically about religion and issues of race, frequently face criminal investigations or civil suits, often with crippling damages claims, Human Rights Watch said.

The government’s sustained harassment of outspoken individuals is exemplified by the case of activist Roy Ngerng, who wrote a popular blog criticizing government actions and policies and highlighting inequalities in Singapore. Over the course of six months in 2014, Ngerng was sued for defamation by Prime Minister Lee Hsien Loong, fired from his job, and charged with unlawful demonstration and public nuisance. In 2016, after he openly supported the opposition candidate in a by-election, the authorities accused him of violating “cooling-off” rules on election advertising and called him in for intensive questioning by the police, who searched his home, seized his mobile phone and computers, and demanded the passwords to his social media accounts.

Bloggers, cartoonists, lawyers, and the foreign media are among the many who have faced contempt proceedings for criticizing the Singapore judicial system. In the most recent case, the attorney general sought and obtained judicial permission to bring contempt proceedings against Lee’s nephew over a private Facebook post in which he noted that a litigious government and a “pliant” judiciary meant that international media was constrained in what it could report about Singapore.

Public protests in the city-state are extraordinarily restricted, Human Rights Watch said. The only place where public gatherings that are even remotely political can be held without a police permit is Speakers’ Corner, a section of tiny Hong Lim Park. Even at Speakers’ Corner, there are detailed restrictions on what can be said, and foreigners are barred from speaking or even being present. In one case, activist Jolovan Wham was given a “stern warning” in lieu of prosecution when two Hong Kong citizens participated in a protest he organized in support of Occupy Hong Kong, even though he had announced both in advance and at the event that foreigners were not permitted to participate.

The new report documents how various regulatory restrictions are used to limit discussion of political or “sensitive” issues in plays, films, and on the internet. The government frequently conditions licenses for public performances of politically themed plays on censorship of the script. It effectively prohibits all positive portrayals of LGBT lives on television, radio, or in film. In 2015, the government banned the showing of a promotional video for the annual LGBT Pink Dot celebration, even though the video simply featured a countdown and then the words “Pink Dot” and the date of the event.

Human Rights Watch called on the Singapore government to drop all pending charges for peaceful speech or assembly and amend or repeal the laws and regulations that restrict speech or assembly to bring those laws into line with international standards.

“Singapore’s kneejerk response to sue or prosecute critics has for many years limited critical reporting on the city-state,” Robertson said.  “Singapore’s trading partners should call on the government to modernize its views of human rights and end its repression of speech and assembly.”

A note about the report title:

“Killing the chicken to scare the monkeys” is a Chinese proverb used the describe the practice of striking hard at a lesser enemy in order to scare a more powerful one. It was used repeatedly by interviewees during the course of the research for this report to describe the Singapore government’s practice of cracking down hard on those who speak out to send a message to others.  As one interviewee said, “It is less that they want to sue someone than that they want to send a message to others not to say things – to perpetuate a culture of fear.  The person is unfortunate that they happened to fit the circumstances to send the message.”

Selected Cases of Suppression of Free Expression and Assembly

Jolovan Wham
Activist Jolovan Wham’s efforts to raise matters of public interest have resulted in repeated criminal investigations and, in November 2017, criminal charges for holding public assemblies without the required police permits. In March 2015, he was given a “stern warning” in lieu of prosecution when two Hong Kong citizens participated in a protest he organized at Speakers’ Corner in support of Occupy Hong Kong, even though he had announced both in advance and at the event that foreigners were not permitted to participate.

Wham was also called in for questioning regarding his involvement in a November 2016 event at Speakers’ Corner in support of the Malaysia Bersih rally for clean and fair elections, and several events held outside Speakers’ Corner. On November 29, 2017, he was charged with three counts of holding public assemblies without the required police permits. The charges stem from an indoor forum on civil disobedience and social movements, held on November 26, 2016, at which Hong Kong activist Joshua Wong spoke via Skype, a silent protest on an MRT train on June 3, 2017 to commemorate the 30th anniversary of the arrest and detention of 22 social activists and volunteers under the Internal Security Act in 1987, and a candlelight vigil held outside Changi Prison on July 13, 2017, to support the family of a Malaysian national, S. Prabagaran, who was slated to be executed the next morning for drug trafficking. Wham was also charged with vandalism for temporarily posting two sheets of paper on the inside of an MRT train during the June protest on the MRT. He faces the possibility of three years in prison on the vandalism charge, and six months in prison or a fine of S$10,000 on the public assembly charges.

The Independent Singapore
In May 2016, police initiated an investigation of the news website The Independent Singapore for violation of the cooling-off rules that prohibit election advertising the day before an election. According to Kumaran Pillai, publisher of The Independent Singapore, “We did what we thought was plain reporting of things that happened before cooling-off day.” Pillai was called in for three rounds of questioning, the first of which lasted 11 hours. The second time he went in, “they threw me in a police car and went to my office, my home.” The police seized his cell phone and two laptops. “I feel I have been stripped,” Pillai said. “They know everything about my life.”

The police also called in editor Ravi Philemon and lawyer Alfred Dodwell, who is a director of the company, for questioning. “The police powers are what I have a problem with,” says Dodwell. “If we say we were hacked, then they can question and see how it was posted and from which computer. But if we accept that we have posted it… there is absolutely no purpose served by arresting the person, taking devices, and going through them. It is a needless violation of a person’s privacy… The purpose is to instill fear. If you post, the response won’t be a slap on the wrist. You will be arrested, held, your devices seized.”

On February 16, 2017, the Singapore Police Force issued a press release stating that Pillai, Philemon, and Dodwell had been given “stern warnings” in lieu of prosecution. When asked about the impact of the warning, Pillai responded, “I think the warning is for people not to associate themselves with me and the Independent. If they do and go down that path this is what they will get themselves into. It is a warning for the rest.”

Roy Ngerng
Ngerng is an activist and popular blogger. In 2012 he started a blog, The Heart Truths, in which he discussed sociopolitical and economic issues affecting Singapore. In early 2014, he began raising concerns about the management of Singapore’s Central Provident Fund, the country’s mandatory pension fund, in a series of blog posts. In an article posted on May 15, Ngerng included two charts comparing the way the CPF was being invested in other funds with the way City Harvest, a church prosecuted for financial fraud, had invested its funds.

Prime Minister Lee Hsien Loong sued for defamation, claiming that the post implied that he had misappropriated money from the fund. According to Ngerng, “I didn’t think the Prime Minister would be affected – I was talking about the government, not him.” Less than two weeks later, the 33-year-old was fired from his job at Tan Tock Seng Hospital, where he was a contract patient coordinator planning programs for people infected with HIV. His employers said he had “misused company time and resources” and called his conduct “incompatible with the values and standards expected of employees.”