The Burmese military is carrying out a campaign of ethnic cleansing against Rohingya Muslims in northern Rakhine State. Scores of people have been murdered and hundreds of villages destroyed, and more than 600,000 Rohingya have fled to neighboring Bangladesh. One of the military’s most feared weapons is mass sexual violence, with untold numbers of women and girls brutally gang raped by government soldiers. Human Rights Watch’s emergencies women’s rights researcher, Skye Wheeler, tells Stephanie Hancock how she was able to investigate these disturbing crimes.

What was your plan when you arrived on the ground in Burma?

We’ve been documenting this crisis since the very beginning. We knew there had been sexual violence in some of the massacres we’d looked into, but we didn’t know how widespread it was. So my job was to find out. And what we found was that the rape has been widespread, and that rape was one of the ways that the Burmese military conducted their ethnic cleansing operations. This is very much a part of this military’s way of terrifying the Rohingya and making them feel worthless. One woman said: “They see us as nothing but leaves they can throw out,” and made a sweeping movement with her hand, like the way you would toss away dead leaves. 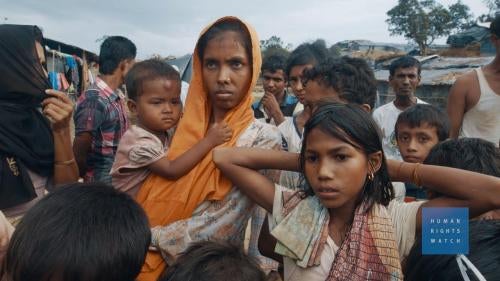 What do you mean by rape being part of ethnic cleansing?

Rape is obviously incredibly traumatizing. It’s a violation of someone’s most private sacred space and your basic sense of selfhood. But it also affects women’s memories, and their sense of being safe at home. If this has been destroyed, it’s much harder for them ever to be able to return home. So it’s an effective method of ethnic cleansing, to remove – by violent and terror-inspiring means – a certain ethnic or religious group from an area.

Was there any warning these mass rapes were about to happen?

Rape is not a new tactic for the Burmese army: we documented it during another brutal campaign against the Rohingya last year that forced tens of thousands to flee. This time, the rapes often followed many weeks and months of sexual harassment, sometimes by military forces stationed in or near Rohingya villages, sometimes by Rakhine Buddhist villagers who had been harassing Rohingya. But when the mass rapes by soldiers happened, it was sudden and it was terrifying.

How did the attacks unfold?

It was horrific. As described to me, in many of the villages it was total chaos and complete terror. People said their villages were surrounded, and then the shooting started, with soldiers launching what we think were some kind of rocket-propelled grenades and setting roofs on fire. Soldiers shot villagers as they fled. They pushed others into burning houses. In other villages, people were gathered together and then women were raped, and men were shot or beaten. Almost all the rapes I documented were gang rapes.

Were any stories particularly hard to hear?

One woman who was gang raped told me that her house was burning down and she was able to grab one child, but not the other. She was in a complete panic, and now she doesn’t know where her child is. She feels so guilty even though there is nothing she could have done.

One girl, no more than 14 or 15, had this really bad scar on her shin and knee, which she said was from the rape. She said that soldiers dragged her out of the house, tied her to a tree and around 10 of them raped her from behind. She was really clear and well-spoken, and had such a presence about her, and it was awful to think this happened to such a young person.

Sexual Violence against Rohingya Women and Girls in Burma

Did soldiers do other cruel things?

Many women and girls told me the rapes were very violent: there was beating, slapping, kicking, and punching. Two women’s breasts were bitten during the rapes. Some of the women’s children had to watch the rapes, or were themselves beaten by soldiers. One woman begged for her kids to be allowed to leave while she was raped, but the soldiers did not allow it.

What do we know about who carried out the rapes?

All the women we spoke to were raped by men in uniform of the Burmese security forces, almost all soldiers. There were also some border police, who have a slightly different uniform. All of the rapes involved many soldiers, there was no attempt to hide it.

You’ve documented mass rape in other places like South Sudan and Burundi. How does what you found in Burma compare?

Well, I’ve never investigated ethnic cleansing before. In South Sudan the rape was part of the conflict, and in Burundi the rape was part of wider political attacks. In Burma it’s not just the rape, it’s that people have lost everything. It’s just mind-boggling that you would destroy hundreds of villages and force over half a million people to flee. And the devastation was so fast; it’s equivalent to the impact of a really long, terrible war in just two weeks. All of a sudden the world was watching thousands and thousands of people pour across a border every day having lost everything. It’s unbelievably tragic.

There are so many efforts to stop rape in conflict, yet we see it happening again and again. We saw it with the Chibok girls in Nigeria, then the Yazidis in Iraq, now the Rohingya. Do we just have to accept wartime rape?

Absolutely not. In armies that have better command and control, there is less rape. In armies where there is punishment for soldiers who rape, there is less rape. It’s not like suddenly soldiers in the fog of war can’t help but rape. It’s all about the context – seeing some people as less human, and exercising power over people you see as the enemy. I don’t think it’s something inherent about conflict.

Does hearing these awful stories all day make you feel depressed?

No. Actually, that’s how I feel when I leave the UN Security Council! Yes, the stories are devastating, no question – my translator, me, we’re all affected. In the field, you see the horrific side, but you also see how people protect each other and fight to survive, and how people would do anything for their kids. It’s when you do the advocacy with governments and people say “OK, maybe we will do something, maybe we won’t.” That’s when you think ‘maybe I’m going crazy.’

No, it’s an incredible privilege to hear these important stories. These are not just stories of victimhood, these are people who have survived unbelievable cruelty and often you’re the first person to hear their story. After the interview, you feel that you’ve discussed something incredibly important about the darkness of humans, but also how amazing people are. For example, this one woman who walked for days with horrific injuries from being gang raped, but made sure she got her four children all safely to Bangladesh. It was so humbling.

Then there’s what drives you. Like the ridiculous statement from a Burmese military commander who said: “Look at these ugly Rohingya women, who would want to rape them?” That makes you determined to do justice to these stories, because the denial and rejection of their experience is another attack on them, it’s just so offensive.

It’s really hard for women and girls. The sun is burning and it’s incredibly hot, the camp is sprawling and a scene of desperation, there’s this pungent smell of excrement and rubbish, it is really far from the main roads, and some of the health services are really chaotic – they’re just in tents or someone under an umbrella. But I would say that everyone that I met was really struggling, not just those who had been raped. It is 600,000 women, men, and children who have been unearthed and thrown into another country, and they don’t even know if they’re welcome to stay or not. I still don’t understand how this could have happened.