(Brussels) – The World Bank is funding half a billion dollars in agricultural projects linked to forced and child labor in Uzbekistan, Human Rights Watch and the Uzbek-German Forum for Human Rights said in a report released today. Under the loan agreements, the Uzbek government is required to comply with laws prohibiting forced and child labor, and the World Bank can suspend the loans if there is credible evidence of violations.

The 115-page report, “‘We Can’t Refuse to Pick Cotton’: Forced and Child Labor Linked to World Bank Group Investments in Uzbekistan” details how the Uzbek government forced students, teachers, medical workers, other government employees, private-sector employees, and sometimes children to harvest cotton in 2015 and 2016, as well as to weed the fields and plant cotton in the spring of 2016. The government has threatened to fire people, stop welfare payments, and suspend or expel students if they refuse to work in the cotton fields.

“The World Bank is giving Uzbekistan cover for an abusive labor system in its cotton industry,” said Umida Niyazova, director of the Uzbek-German Forum for Human Rights. “The World Bank needs to make clear to the Uzbek government and to potential investors that it wants no part of a system that depends on child and forced labor by suspending funding until these problems are solved.”

The World Bank’s support for these projects has created the impression that Uzbekistan is working to end forced labor in good faith, when it is not, confusing responsible companies and governments, Human Rights Watch and the Uzbek-German Forum said.

In recent weeks the Uzbek-German Forum found that the government is once again forcing its citizens, including children, to weed the cotton fields and plant cotton as well as plant pumpkins, tomatoes, and other agriculture products.

The country’s new president, Shavkat Mirziyoyev, has promised reform following more than two decades of repressive rule under Islam Karimov, whose death was reported on September 2, 2016. This leadership change provides a good opportunity for concerned governments and international financial institutions to press for comprehensive reforms. Representatives of G20 countries meeting in Hamburg on July 7 and 8, 2017, should ensure that their efforts to support sustainable supply chains and decent work extend beyond factories to farms and press the World Bank to cease funding projects that reinforce abusive labor systems.

The report is based on 257 detailed interviews and about 700 brief conversations with victims of forced and child labor, farmers, and key actors in the forced labor system, leaked government documents, and statements by government officials. Human Rights Watch and the Uzbek-German Forum documented forced and child labor in one World Bank project area and systematic forced labor throughout the cotton sector. They found that it is highly likely that the World Bank’s agriculture and irrigation projects, as well as its investments in education, are linked to ongoing forced labor and that there is a significant risk of child labor as well.

Uzbekistan is the fifth largest cotton producer in the world. It exports about 60 percent of its raw cotton to China, Bangladesh, Turkey, and Iran. Uzbekistan’s cotton industry generates more than US$1 billion in annual revenue, or about a quarter of the country’s gross domestic product (GDP), from one million tons of cotton fiber. Cotton revenues go into an opaque extra-budgetary Ministry of Finance account that is not open to public scrutiny and is controlled by high-level government officials.

A total of 274 companies have pledged not to source cotton from Uzbekistan knowingly because of forced and child labor in the sector.

In 2015 and 2016 World Bank investments in Uzbekistan’s agriculture sector amounted to US$518.75 million. The Uzbek government promised the Bank that it would not use forced or child labor linked to the projects or within project areas. The Bank promised to independently monitor for abuses and create a way for victims to seek redress. But the Uzbek government has continued to force enormous numbers of people, sometimes children as young as 10 or 11, to work long hours in the cotton fields in difficult conditions, including within the Bank’s irrigation project area. The Bank has settled for narrow, ineffective monitoring, effectively providing cover for the government’s abuses. 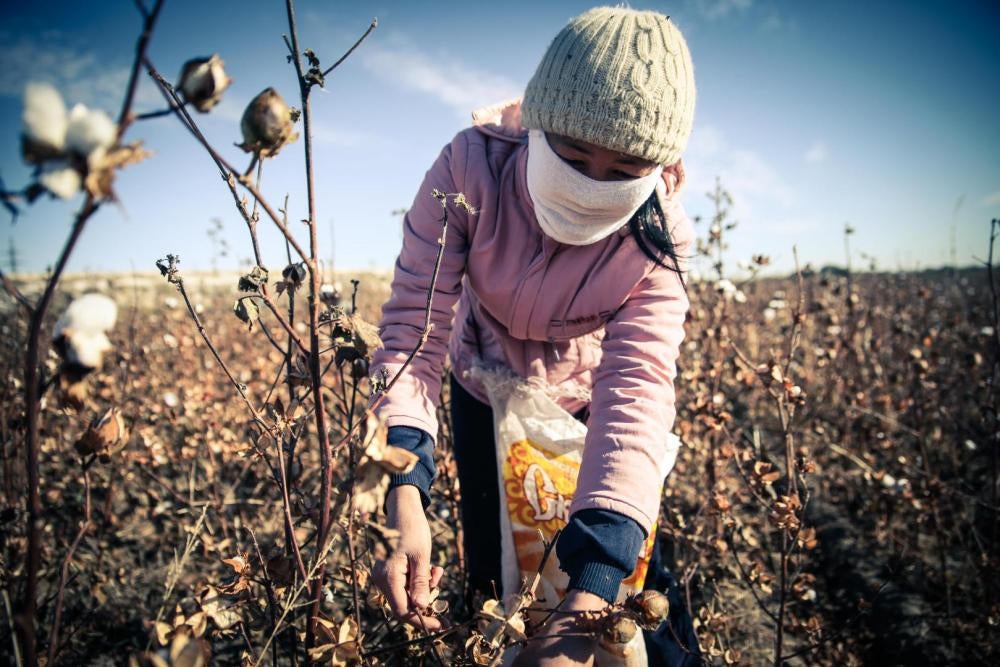 The World Bank should stop funding projects that are linked to forced and child labor.&#13;

“The government gave the orders [to pick cotton] and you will not go against those orders,” said a schoolteacher in Turtkul district, Karakalpakstan, where the government is implementing the Bank-financed irrigation project. “If I refuse, they will fire me…. We would lose the bread we eat.”

Independent groups, including the Uzbek-German Forum, submitted evidence of forced and child labor to the World Bank during and following the 2015 autumn harvest, as well as of attacks against human rights defenders who sought to report on these abuses. Instead of suspending its loan to the government, in line with its 2014 agreement, the World Bank increased its investments in Uzbekistan’s agriculture industry through its private sector lending arm, the International Finance Corporation (IFC). In December 2015 the IFC invested US$40 million in a leading cotton yarn producer in Uzbekistan to expand its textile plant.

The World Bank contracted the International Labour Organization (ILO), a tripartite UN agency made up of governments, employer organizations, and worker representatives, to monitor forced and child labor in 2015 and 2016. The ILO has an important role to play in promoting fundamental labor rights in Uzbekistan. However, with the government and non-independent labor unions involved in monitoring, the system effectively is monitoring itself. The government has also gone to great efforts to instruct pickers to tell monitors they were picking cotton voluntarily. In 2016, the ILO decided it was no longer necessary to monitor for forced labor, citing the government’s implicit acknowledgement of the forced labor problem.

The government used intimidation, violence, and arbitrary detention to prevent independent monitors and journalists from reporting on forced labor. The Uzbek-German Forum’s monitors, as well as other people conducting human rights and labor rights monitoring work, faced constant risk of harassment and persecution in 2015 and 2016.

In 2015, one monitor, Dmitry Tikhonov, had to flee the country and another, Uktam Pardaev, was imprisoned for two months and released on a suspended sentence. In 2016, only one Uzbek-German Forum monitor, Elena Urlaeva, continued to work openly, and she was subjected to surveillance, harassment, arbitrary detention, assault, and involuntary stays in a psychiatric hospital.

The World Bank and the IFC should suspend agriculture and irrigation financing to Uzbekistan until it is not tainted by forced and child labor, Human Rights Watch and the Uzbek-German Forum said. The Bank and the IFC should also take all appropriate measures to prevent reprisals against human rights defenders carrying out work linked to their investments, respond swiftly should they occur, and work with borrowers to remedy abuses.

“The World Bank’s mission is to fight poverty, but people living in poverty are the most vulnerable to forced and child labor in Uzbekistan,” said Jessica Evans, senior business and human rights researcher at Human Rights Watch and co-author of the report. “The World Bank should stop funding projects that reinforce the country’s forced labor system, instead prioritizing initiatives that advance the social and economic needs of people living in poverty.”

Selected Quotes from the Report

“Cotton! You have to go and pick cotton and fulfill the norm. Is it clear!?.... This policy applies to everyone! If even one person does not go out, it will be bad for you! I’ll shut down your organizations! Everyone, without exception, whether from the hokimiat [local government], tax authorities, the bank or other organizations, all will be shut down.… [To one of the meeting attendees:] What’s this? You delivered only 1,286 kilograms? Why is that? I’ll tear your head off!”

“I work at a school. If it was up to the teachers, no one would want to work in the cotton fields. Nurses are also women [who have significant family responsibilities]. They don’t go reluctantly either, they are forced… Three or four of the 50 teachers at my school go voluntarily. Others don’t want to go. Those three or four are tired from teaching and would rather pick cotton than teach in school. If they are good pickers, able to pick more than 100kg per day, they get extra ‘presents’ from the government. But teachers like me can’t meet the quotas and can’t earn money from picking cotton. Maybe the ILO conclusion [that only a minority of cotton pickers are involuntarily working] is true from appearance, because people are scared to share the truth, but it doesn’t go underneath to expose reality.”

“Maybe 10 children might agree to work during the harvest, but the others refuse and we have to run after them.”

“Of course I wouldn’t go [to pick cotton] if I had the choice. None of my colleagues would either. It’s forced, everyone is forced…. We would intimidate parents if they refused to have their children contribute to the harvest. We would threaten that they would not get their diploma…. In 2016, there were some pregnant women who were college teachers. Those that had powerful connections were not forced and were not required to contribute money. Otherwise, they were still forced to work.”

“The government pays your salary so you will pick or you could be asked to give up your post. Now, there is no work… so you can’t refuse [to pick cotton], you are obligated…. What kind of fool would go to work in the dirt in the cotton fields on a cold day of his own accord instead of sitting inside in a nice warm office? To understand that [picking cotton] is mandatory, you don’t have to be a genius and solve puzzles…

“Respected master’s students! You must resolve your participation in the cotton harvest within one hour. Today we are compiling information and you are at risk of expulsion. Immediately resolve this issue.”

“Two months weeding, and then another three months harvesting cotton: because of this, pupils do not receive their full education. Teachers have to conduct lessons in two or three classes simultaneously. For example, the teacher gives some written assignment to one class, and goes to another. Left alone, pupils start making noise. They’re still kids, they cannot learn on their own.

“I know that you cannot force people to work. But I won’t call the complaint line number we were given. There is no use. These posters are put up for the benefit of the ILO. All these calls [to the hotlines] will result in simple teachers and medical workers losing their jobs.”

-A school director who said she would be punished by the local government if she could not get her staff to pick cotton, Fergana region, September 29, 2016.

“[The education ministry] called the district department of education and asked them to resolve my issue ‘peacefully’…. After that, the school director went after me. He started threatening me and said he would show me ‘just what he’s capable of.’”

-A schoolteacher who had asked the education ministrythat teachers be freed from mandatory cotton picking, Gulistan, Syrdarya region, September 29, 2016.

“Go to the homes of farmers in debt, who can’t repay their credit, take their cars, livestock, and if there are none, take the slate from their roofs!”

-Then-Prime Minister Shavkat Mirziyoyev on a conference call with local authorities and farmers, October 12, 2015, as reported by a farmer who was on the call to Radio Ozodlik