There are almost three million reasons why Japan should support a new resolution at the UN Security Council that would impose an arms embargo and targeted individual sanctions on South Sudan.

To be precise, UN agencies estimate that South Sudan’s conflict has forced at least 2.75 million South Sudanese to flee their homes and seek refuge in other parts of the country or across the borders into neighboring countries. “Angelina,” a young woman Human Rights Watch interviewed in 2015 in a squalid displaced persons camps told us: “I was with my neighbor when they asked her whether her baby was a boy or a girl. When she said ‘boy’ they told her that they were going to kill the baby because ‘when he grows up he will fight with us so I have to kill him before that happens.’” She told us that the soldiers shot the boy in front of his mother. 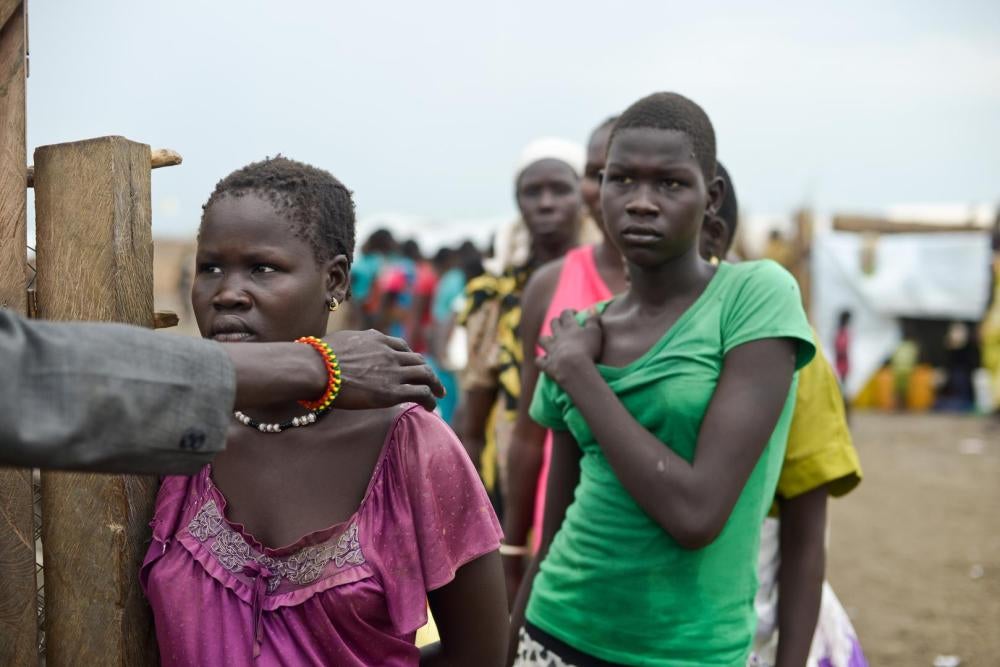 South Sudan arms embargo is finally going to a vote. Join us and show your support!&#13;

Angelina’s is one of thousands of similar experiences of civilians under attack in South Sudan. Again and again, civilians have seen their children forcibly recruited or abducted. Their houses and crops have been burned. Their cattle have been looted. Their husbands and fathers and sons have been killed. Their sisters, daughters and mothers have been raped and assaulted, sometimes repeatedly. They’ve been forced to flee into swamps, where the only food is water lilies, and to sleep in open, malaria-infested marshes. Even the marshes are no longer safe now that the South Sudan government has used new amphibious vehicles and helicopter gunships to hunt down civilians trying to hide from predatory troops.

So goes the war in South Sudan. The ongoing free flow of weapons and military equipment has enabled soldiers--and rebels--to continue attacking civilians with complete impunity.

Since South Sudan’s civil war began on December 15, 2013, Human Rights Watch and other organizations have documented countless serious violations of international humanitarian law, or the “laws of war.” Over the past three years civilians have consistently and systematically been targeted by all parties to the conflict, with women and children bearing the brunt of the brutal confrontation for power between president Salva Kiir and his former vice-president Riek Machar.

Many hoped that the August 2015 peace agreement would end the unlawful targeting of civilians. But in July of this year, the government and the rebels fought in the capital, Juba. During and after the fighting, near the main United Nations base in the country, dozens of displaced South Sudanese women were raped by soldiers, sometimes within sight of the nearby UN peacekeepers.

Since 2013, the UN mission to South Sudan (UNMISS) has often failed to protect civilians. Recent investigations into the failures have pointed a clear path to how these failures can be addressed. By deploying additional peacekeepers to South Sudan, Japan has shown its willingness to support efforts to end the growing toll of abuses against civilians, but it can do more.

An arms embargo and additional, targeted individual sanctions against commanders responsible for the atrocities can help prevent further abuses in South Sudan. The UN’s Panel of Experts, the UN Secretary General Ban Ki-moon, and many others have said that these measures could have a positive impact on the behavior of the warring parties. But a US-led proposal to establish these measures is faltering at the UN Security Council. A handful of governments sitting at the Security Council – including Japan, have not endorsed the measures.

Failing to support the embargo and targeted sanctions is morally indefensible and strategically flawed. We’ve seen countless broken promises by South Sudan’s government and opposition leaders, and a complete failure to hold individuals responsible for the atrocities they’ve committed. Japan demonstrated its willingness to protect civilians when it deployed its peacekeepers. Now, it needs to back up this concrete step with further action at the political level, and vote alongside the United States, France, the United Kingdom and others to support the embargo and the sanctions.

Hundreds of thousands of civilians are still hiding in the swamps or are in UN protection camps, living under the constant threat of violence. Hundreds of thousands have fled the country, including in recent months. It’s long past time for all concerned countries, and particularly members of the Security Council, to show that the lives and welfare of South Sudanese civilians are their prime concern.