Fatimatu Yamsa knew that her desperate attempt to flee the slaughter all around her had failed as soon as she saw the Christian anti-balaka militia at a roadblock. Fatimatu was on a truck in Boyali, about 100 kilometers northwest of Bangui, capital of the Central African Republic. Knowing she was about to die, Fatimatu pleaded with the Christian woman next to her to take her seven-month-old baby and pretend it was the woman’s own.

“If you make it to the next town, ask for the Yamsa family, and give them my baby,” Fatimatu pleaded in desperation as she was ordered to descend from the vehicle.

The baby was saved, but Fatimatu was not. As the truck drove off, she and two other Muslim women and their four children were ordered by the anti-balaka fighters to go into the mosque. One eleven-year-old boy made a desperate dash for freedom and escaped. Fatimatu and the others were hacked to death with machetes on January 14. Dried pools of blood outside the mosque still mark where they had been. When I visited a few days ago, local villagers looked away in shame, and children played inside the abandoned mosque.

In this little-known country in the middle of Africa, a spree of killing is taking place. When the mostly Muslim Seleka overthrew the former president, François Bozizé, in March 2013, effective governance of the Central African Republic ceased to exist. Fiefdoms sprang up, ruled by Seleka leaders, some of whom had come from Chad and Sudan. They ruled through absolute terror, burning hundreds of villages and firing randomly on the terrified mostly Christian population whenever they encountered them. Although nominally disbanded in September 2013, the Seleka continued to terrorize civilians for several more months. A predominantly Christian group, the anti-balaka, then began to contest Seleka violence with its own abuses. A mob of Muslims attack and attempt to lynch a Christian man, second from left, who works transporting goods to the market, in a revenge-attack for the killing of one of their community members. He escaped. January 23, 2014.
© 2014 Marcus Bleasdale/VII for Human Rights Watch

The Seleka’s self-appointed president, Michel Djotodia, was forced from power by the international community on January 10, 2014, and fled to exile in Benin. On a daily basis, many other Seleka leaders are fleeing, having realized that the game is over for them. General Isa, the former head of presidential security for the Seleka, told me: “Now, it is every officer for himself. We are all trying to find our own way out of here.”

In the aftermath of their flight, Muslim communities are facing the wrath of the Christian anti-balaka militia, originally created by Bozizé to fight banditry but now reformed to fight the Seleka, and the majority Christian civilians who suffered such terror for the last ten months. In town after town, the Muslim population, consisting of traders and nomadic, ethnic Peuhl cattle herders, have been attacked and massacred, their homes and mosques destroyed. 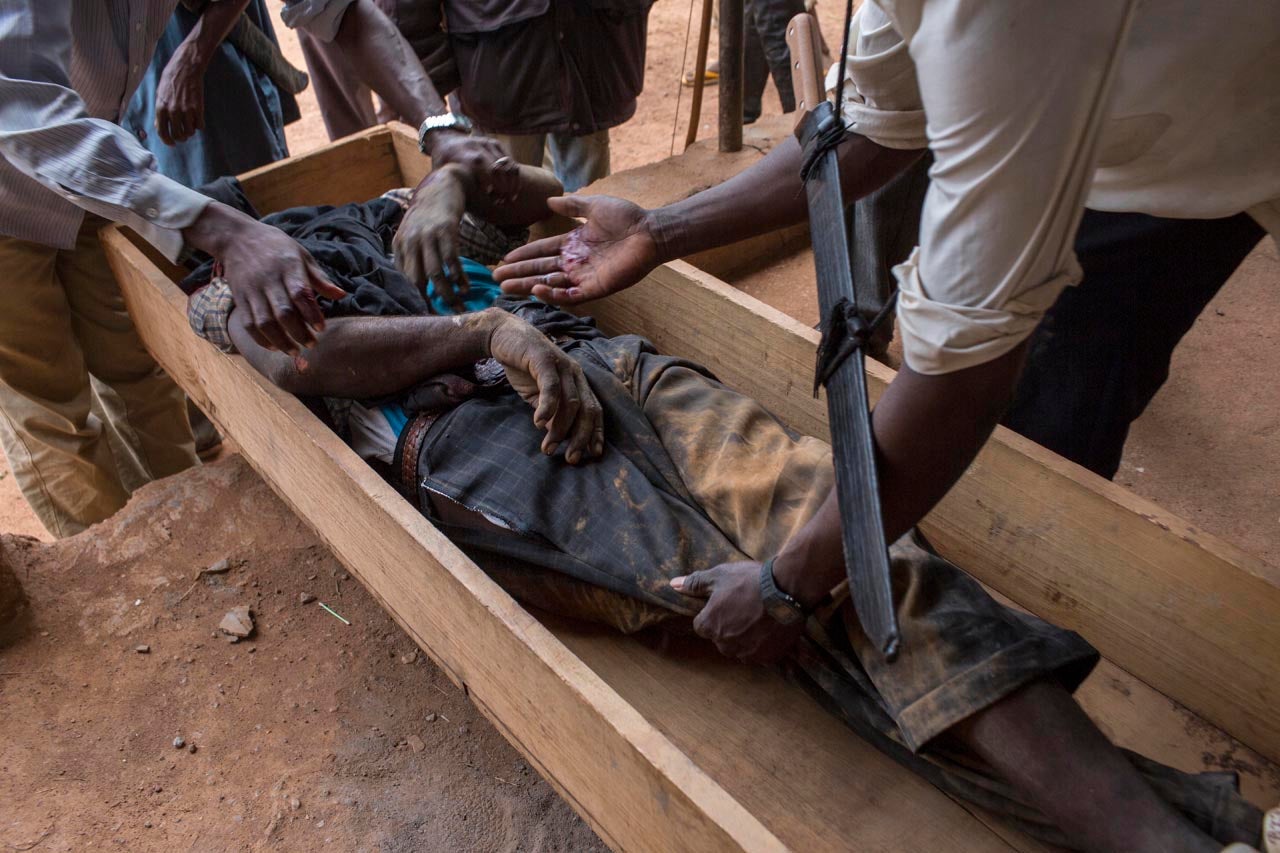 The body of Mohammed, 20, killed by a grenade from anti-balaka forces in the PK12 neighborhood of Bangui while searching for food. During preparations for his burial, the mosque was attacked and everyone had to flee. January 23, 2014.
© 2014 Marcus Bleasdale/VII for Human Rights Watch

Last Wednesday, immediately after the Seleka fled the Muslim neighborhood of PK13 in Bangui, hundreds of anti-balaka fighters arrived, chasing away the remaining inhabitants, who fled to the relative safety of Rwandan peacekeepers at the scene. All around us, homes were being systematically looted and dismantled in an atmosphere of euphoric destruction. The main mosque was dismantled by a crowd of machete-wielding fighters who told us: “We do not want any more Muslims in our country. We will finish them all off, this country belongs to the Christians.”

I pleaded with the anti-balaka fighters to leave the PK13 residents alone, but they showed no sign of mercy, telling me: “You get them out of here, or they will all be dead by morning. We will take our revenge.”

The death records of the Bangui morgue read like a chapter from Dante’s Inferno, page after page of people tortured, lynched, shot, or burned to death. The smell of rotting corpses is overwhelming, as when people die in such numbers, it is impossible to bury them immediately. On really bad days, the recording of the dead just stops: no names are recorded, just the numbers of dead. In the 15 minutes we managed to remain amid the stench and horror, two more bodies arrived: A Muslim hacked to death with machetes, and a Christian shot dead by the Seleka.

The French Sangaris troops, who are disarming the Seleka, often seem reluctant to intervene and told me they cannot take sides, even when Muslims, now unarmed, are killed in revenge attacks by the anti-balaka. The less well-equipped African Union MISCA troops, particularly those from Rwanda, Burundi, and the Republic of Congo, are playing a more active role. A commander of the Rwandan troops told me that their intervention in the Central African Republic crisis is deeply personal for him and his troops: “What we see here reminds us of what we experienced in Rwanda in 1994,” he told me, “and we are absolutely determined not to let 1994 happen again.” Despite their collective efforts, peacekeeping troops on the ground are completely overwhelmed, and a United Nations peacekeeping mission is needed to stop the killings.

There are some small signs of hope. For the majority Christian population, the departure of the Seleka has meant an end to the terror that forced them to flee into the bush, and villages that were completely abandoned last month are slowly returning to life, destroyed homes being rebuilt.

In Boali, another town, Father Xavier-Arnauld Fagba personally brought more than 700 Muslims in his town who were under attack to safety at his Catholic church last week. On Sunday, he preached love and reconciliation to his followers, and led them outside to extend handshakes of peace with their Muslim neighbors. “We cannot be silent and cower in the face of injustice, but must have courage,” he preached. “To be a Christian is not just about being baptized, and true Christians live a life of love and reconciliation, not bloodshed.”

After all of the bloodshed we have witnessed here, I listened, fighting back tears, and hoped that his message would be heard. 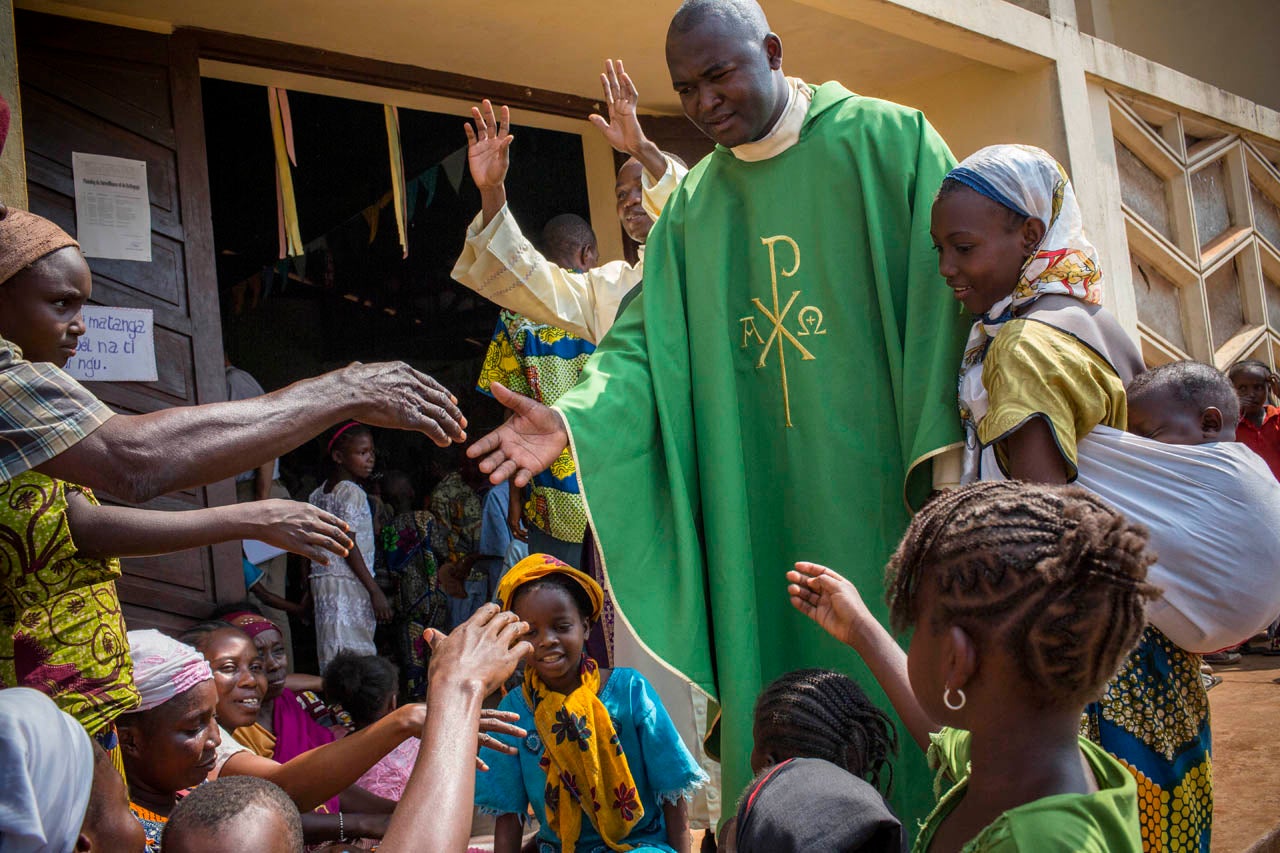 Father Xavier-Arnauld Fagba with local Muslims sheltering in his care at St. Pierre’s Church in Boyali. He sought out and offered sanctuary to 700 Muslims in his town who were under attack by anti-balaka forces. January 26, 2014.
© 2014 Marcus Bleasdale/VII for Human Rights Watch