By mid-September 2015, more than&nbsp;430,000 people reached the EU via the Mediterranean since the beginning of the year, a significant increase over previous years. More than 2,700 people died or went missing in the same period.&nbsp;Arrivals to Greece via Turkey across the Aegean Sea now outstrip crossings via Libya to Italy. From Greece, a debt-stricken country unable to cope with the influx, many travel overland through the Western Balkans to reach other EU countries. The land route contains its own perils, including summary expulsions and police abuse, as well as life-threatening smuggler tactics.

Two-thirds of those taking the dangerous journey come from countries beset by war, generalized violence, or with repressive governments, such as Syria, Eritrea, Somalia, Afghanistan, and Iraq. The EU continues to emphasize preventing departures and combating smuggling over a coordinated approach based on access to protection and respect for human rights.</div>

Turkey: Where Desperation Meets the Waves 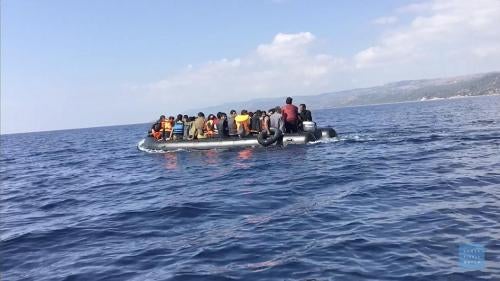 The imposing castle complex overlooking the sea at Assos, Turkey, and the Greek island of Lesbos, just offshore, was once home to the Greek philosopher Aristotle, and later to Alexander the Great. Today, the tiny seaside village, still frequented by tourists, has become central to a new chapter in the region’s story. It is one of the main set-off points for the dangerously crowded rubber boats filled with asylum seekers and migrants desperate to reach Greece, with the aim of ultimately reaching Western Europe.

As we drove past the castle’s massive walls and its admiring tourists on Friday, October 2, heading toward the sea, we stumbled on a family of terrified Syrians who had just had a close escape with death.  The father, still dripping wet, told us that he, his wife, and their two toddlers had just jumped from a badly overloaded rubber boat that was taking on water, only to be confronted by smugglers who threatened them if they didn’t get back on.

“We were totally shocked when we got to the boat and saw how many people they put on,” the father told us, “When the boat set off, it started taking on water, so we men jumped overboard and swam the boat back to the shore to save the women and children.” While the man talked, his wife stood nearby, ashen.

When they managed to get back to the shore, the father said, the smugglers threatened them with death if they didn’t return to the boat.

“The smugglers were armed with knives, and one had a gun while another had an electric cattle prod,” he told us. “They threatened to kill us for not going on the boat.”

The family had decided to run away, forfeiting the $2,400 they had paid the smugglers for the journey.

The numbers of asylum seekers and others hoping to cross from Assos—just one of many jumping-off points on the Turkish coast—boggles the mind. All night long, hundreds of desperate asylum seekers and migrants from Syria, Iraq, Afghanistan, Iran, Pakistan, and other countries arrive on buses, smuggler’s trucks, and tourist vans at the little village, traveling from Istanbul and Izmir, where they first contact the smugglers. On arrival, they are marched out to several launching sites from which the inflatable boats can take off as frequently as every 20 minutes.

Abu Omar, an Iraqi lab technician from Anbar, a Sunni governorate, told me he had fled his home because of threats from Shi`a militias, and had been smuggled through ISIS-controlled areas of Syria. He said he was part of a group of 500 Syrians, Iraqis, Afghans, and others taken by a single people-smuggler to Assos that morning. Do the math: 500 times the smuggling rate of $1,200 means an income of $600,000 in a single night, for just one of the smugglers operating in the area.

Abu Omar, like many others, ultimately decided not to get on the boats that night. “They had promised us that there would be only 35 per boat, but when we got to the water, they put more than 50 on each boat, and people were screaming in terror,” he told me. He had decided to return home to Iraq, but then realized that risking his life again to travel through ISIS-controlled Syria carried even greater risk than the boats. The next day, he called to tell us he would try the boat crossing again, and he made it across to Lesbos.

At the local bus station, we found dozens of dejected, exhausted, and freezing people who had all gone through the same experience, jumping off sinking boats and being threatened by thuggish smugglers. Laila, a Syrian woman, sat dazed on the concrete floor with her two toddlers, her exhaustion making her barely notice that they were shivering from cold.  We had to help her up to carry the boys to our heated car, and prevent them from going into hypothermia.  Dozens of people were standing around, wondering what to do next, or even where to find the bus fare to leave the remote sea coast after their failed attempt to reach Europe.

On Sunday, a perfectly crisp and calm day, we watched from afar as more than 20 overloaded rubber dinghies set off from the coast of Assos, from five different camps along the coast, in under two hours.  From an overlooking bluff, we could see the smugglers crowd a boat with people, a sea of orange life jackets, and we could hear the screams of children whose parents were taking them on a dangerous journey. “May God protect us!” “Pray for us!” the parents shouted as the engine started and they began their uncertain journey out of war and chaos. They were among the lucky ones. Each dinghy made it across in just under half an hour as the sun set over the sea.

The European Union has made no secret of its concern for its exterior borders, and the challenge posed by the unprecedented number of asylum seekers and migrants arriving in Greece. But the overcrowded rubber boats are not the cause of the influx, but a symptom. Almost 400,000 people have made the crossing from Turkey to Greece this year. According to UNHCR, the UN refugee agency, 97 percent are from refugee-producing countries -- 70 percent from Syria alone, 18 percent from Afghanistan and 4 percent from Iraq. People seeking protection in Europe have turned to smugglers, who hold their lives in contempt, because asylum seekers lack safe and legal alternatives.

The EU has also made cracking down on and dismantling smuggler operations a priority, but what drives that effort is unfortunately not to end the brutal treatment of desperate asylum seekers but rather to stem the mass influx into the EU. The European Union and Turkey should, indeed, work together to end the abuse and exploitation of asylum seekers, in the same way they should cooperate on rescue-at-sea operations, But cooperation only or primarily at that level would be inadequate and ultimately ineffective in resolving the human dimension of this problem.

The EU should recognize that the majority of the people coming via Turkey are from a handful of war-torn countries and repressive regimes; that the expectation that Turkey will serve as the EU’s dumping ground for refugees is unrealistic, unfair, and unsustainable; and that the reason the asylum seekers resort to thuggish smugglers is precisely because there are so few legal and safe avenues to asylum in Europe.

A legal ferry ride for those lucky enough to possess a European passport or Schengen visa costs just 20 Euros, compared with the $1,200 that asylum seekers pay the smugglers.

A crackdown on the smugglers cannot be used as a convenient excuse by European leaders to effectively shut the door on asylum seekers wishing to reach Western Europe. Instead, Europe should undercut the ruthless profiteering off human suffering by creating safer and legal alternatives to seek protection in Europe. That is a key step toward addressing both the dangerous journey and reasons people are willing to risk their lives to take it.