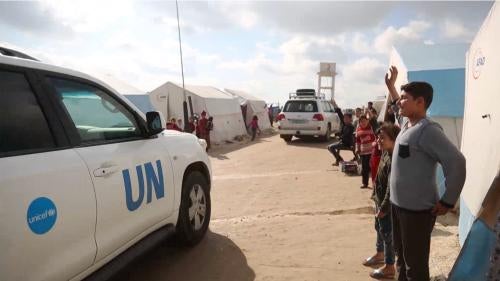 Millions of Syrians risk losing access to lifesaving aid, including during the Covid-19 pandemic, if Russia vetoes reauthorizing the only remaining UN aid corridor from Turkey into opposition-held northwest Syria, Human Rights Watch said today. The United Nations Security Council should reauthorize full cross-border operations into the region and authorize a resumption of aid flows from Iraq to northeast Syria when the Council’s current resolution expires on July 10, 2021.

The UN humanitarian chief has said that shutting down this gateway into northwest Syria, which is under the control of anti-government groups, would be “catastrophic.” Non-UN aid groups in northeast Syria, which is mostly under the control of the Kurdish-led Autonomous Administration, a quasi-autonomous authority, say they have been unable to bring in enough aid since the UN was forced to stop its cross-border operations between Iraq and Syria in January 2020. As of May 31, only 17,500 Covid-19 vaccine doses for healthcare workers and only limited other supplies to respond to the pandemic have reached the northeast from Syria’s capital, Damascus, and no aid reaches the northwest from there.

For at least seven years – the Syrian government has been obstructing aid to millions of Syrians living in areas outside of its control.

This includes 4 million people who live in the northwest. They’ve been able to live thanks to UN aid that reaches them from Turkey.

But Russia could unleash a humanitarian crisis by using its UN Security Council veto to shut down that last aid corridor.

Last year it also forced the Council to close the only aid corridor from Iraq into northeast Syria where 2 million people need aid.

This seriously reduced access to medical care for hundreds of thousands of people, including much needed supplies to prevent and treat Covid19.

The UN Security Council should reauthorize aid operations from Turkey and Iraq into northern Syria.