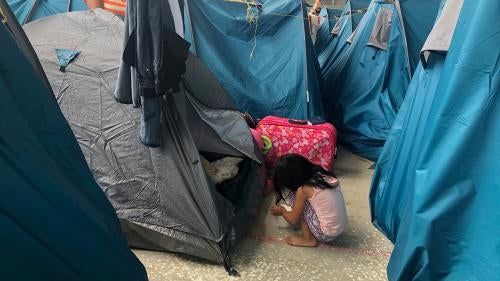 Venezuelan security forces opened the offensive in Apure state on March 21, 2021, with the alleged purpose of combatting armed groups in Venezuela. The operation led to the execution of at least four peasants, arbitrary arrests, the prosecution of civilians in military courts, and torture of residents accused of collaborating with armed groups. The abuses follow a pattern similar to that of systematic abuses that have led to international inquiries into possible crimes against humanity in the country.

I watched when they [Venezuelan security forces] started beating them [my family] on the floor. The accused my wife of being a guerrilla fighter. She told them that she was two months pregnant. [They said] "No, better born dead."

For years, several armed groups have openly operated in Venezuelan territory near the Colombian border. In March 2021, in the Venezuelan state of Apure, Venezuelan security forces started an offensive against one of these armed groups.

Constant airstrike attacks and abuses committed by Venezuelan security forces against the local population, have forced thousands to flee

and cross the river into the state of Arauca in Colombia. More than 5,800 people have fled. Many live in overcrowded shelters where it is nearly impossible to maintain social distance to protect against the spread of Covid-19. There, food, drinking water, basic sanitation, health supplies, and medical attention are scarce. Many others are staying in family homes or rural areas.

Most of them fear for their lives if they go back to their homes in Venezuela where security forces have committed egregious abuses against people accused of being part of or aiding guerrillas.

My family was brutally massacred. They [security forces] tried to make them look like members of the FARC guerrillas, when they’re honest, humble hard-working farmers.

These are not isolated cases. Between 2016 and 2019, Venezuelan security forces have been implicated in more than 19,000 killings in which they claimed the victim had “resisted authority.” Since 2014, they have carried out over 15,000 arbitrary arrests, many involving torture. And a total of at least 870 civilians have been prosecuted by military courts.

Two tanks arrived and a bunch of military men dressed as FAES [Fuerzas de Acciones Especiales] came out. They began to torture me with a knife and asked me if I was a guerrilla collaborator. Since I wasn't telling them what they wanted to hear, they took out pliers and grabbed my finger. I felt like my finger was going to break, they were going to rip it off.

The security forces arrived. They took me, tied me up, beat me, put me in a truck. I spent days detained in an inhumane condition. The jail was three meters by five meters, without windows. There were 38 people. They didn’t say why.

There have also been reports of looting, and houses and crops destroyed and burned by security forces.

They burned our houses. They stole everything we had. They didn't give us time to get anything out. We only took the clothes we had on.

The Prosecutor's Office at the International Criminal Court is deciding whether it should move forward with an investigation into allegations of crimes against humanity in Venezuela. It should also consider the abuses in Apure.

Many people who fled Venezuela won’t be able to go back to their homes in the near future. The Colombian government and international donors should ensure sufficient humanitarian aid is available for them and Colombia should ensure those who decide to stay obtain legal status that allows them to access fundamental rights.