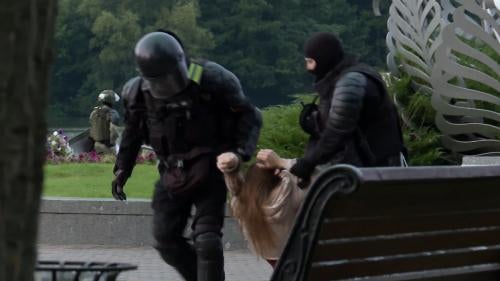 The victims described beatings, prolonged stress positions, electric shocks, and in at least one case, rape, and said they saw other detainees suffer the same or worse abuse. They had serious injuries, including broken bones, cracked teeth, skin wounds, electrical burns, and mild traumatic brain injuries. Some had kidney damage. Six of the people interviewed were hospitalized, for one to five days. Police held detainees in custody for several days, often incommunicado, in overcrowded and unhygienic conditions.

On August 9, Alexander Lukashenko was controversially declared to have won the election for President of Belarus for a sixth term.

Mass protests immediately erupted across the country in response to allegations of widespread electoral fraud.

Riot police violently detained not only protesters but also people they randomly grabbed off the street,.

This recording was taken by a protester who was grabbed by the police.

Hands behind your f**king head!

Subtitles:  You don’t need to beat anyone here.

No one is resisting.

Those detained gave accounts of threats, severe beatings and horrific torture by security forces in detention.

Subtitles: What are your injuries?

One month after the elections, police have started to detain large numbers of   protesters again

International action is needed to document abuses and insist that perpetrators are held accountable in Belarus, so victims can obtain justice.