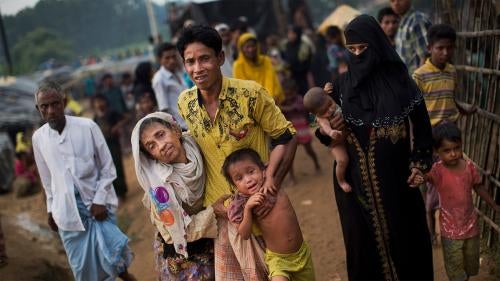 (New York, August 24, 2020) – The Myanmar government has failed to ensure that nearly one million Rohingya refugees can safely return home three years since fleeing the Myanmar military’s crimes against humanity and possible genocide, Human Rights Watch said today. Rohingya refugees in Bangladesh have faced tightened restrictions on rights to information, movement, access to education, and health, and have been unlawfully killed by Bangladeshi security forces.

On August 25, 2017, the Myanmar military began a brutal campaign of ethnic cleansing against Rohingya Muslims involving mass killing, rape, and arson that forced over 740,000 to flee, most to neighboring Bangladesh which was already hosting an estimated 300,000 to 500,000 that had fled persecution dating back to the 1990s and after.

“I hope no community in the world has such a bad and horrific day that the Rohingya community had on 25th August 2017.”

“We witnessed thousands of people being killed. Bodies were floating in the river in Tula Toli, but no justice has been served.”

The military’s widespread killings, rape and arson forced over 740,000 Rohingya to flee to Bangladesh

They are now living in refugee camps in Bangladesh, where aid workers fear a Covid-19 outbreak

“We really want to go back to our country and check on our land, our animals, but it’s impossible. How long do we have to live under these tarp shelters?”

Myanmar authorities say the Rohingya can return, but refuse to ensure their safety or freedom

“We can only go back home if we know that the torture we faced will not happen again.”

The 600,000 Rohingya still in Myanmar are denied citizenship, endure persecution, and live under threat of genocide

“I want to go back to Myanmar, but only when we will be given our rights there.”

“I want to fulfill the dream I used to have, to become a college teacher, helping my own country by teaching others. I hope to make that dream come true.”